READ TO ME: A glowing tale for middle-schoolers 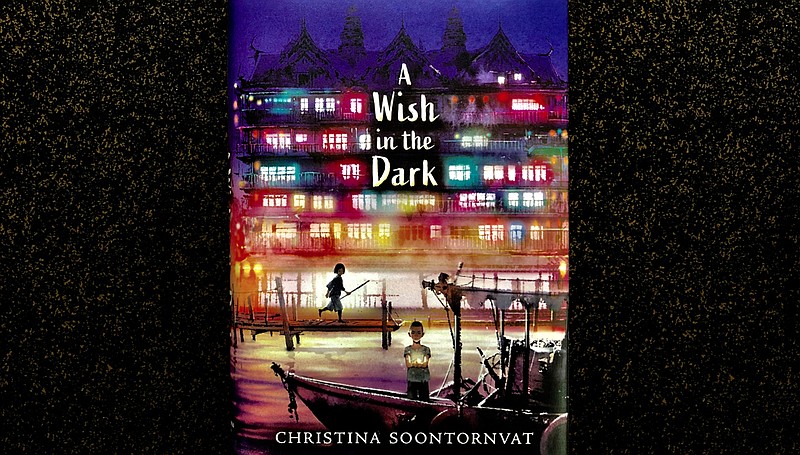 TITLE: "A Wish in the Dark"

STORY: The world of "A Wish in the Dark" resembles Thailand and especially Bangkok, a teeming river metropolis. Canals and a great brown river connect and divide the fictional city Chattana into distinct neighborhoods, where the wealth or poverty of each separate community is obvious from the colored glow of its lights at night.

All the power in the city comes from artificial orbs that have been illuminated magically by the Governor, and priced by the Governor for sale. Wealthy citizens buy the brightest, golden orbs. Lesser citizens can afford hot red or cold blue orbs; but only the people on the bottom of the ladder use his dim, violet orbs.

All the colors glowing together are beautiful.

But in Chattana, violet light is for beggars, criminals, laborers. Children are taught to say, "Light shines on the worthy." Everyone should strive to buy brighter orbs, and personal ambition is a mark of good character.

The Governor is acclaimed as a benevolent ruler. He showed up after an epic fire destroyed much of Chattana. His magical lights made the city safer, and life became easier. And he banned fire, because fire is dangerous (it's also free). And he built a prison.

Two orphaned boys, observant Pong and asthmatic Somkit, live in Namwon prison. Namwon is a concrete compound shaded by great mango trees, and its strongest and most determined kids run roughshod over the others.

One day, during a ceremony involving the Governor, mean girls try to steal a mango from puny Somkit. Pong defends him. This scuffle is noticed by the prison warden's self-righteous daughter, Nok, who assumes the boys are bad and tattles to the Governor.

Nok is a character of equal importance to Pong. She excels at spirefighting, a form of martial art. She is unaware how desperate she is to prove herself worthy. Among the unexpected consequences of her tattling are Pong's escape from the prison and his moral education in a better place far from the city.

She takes it upon herself to pursue him, to bring him to justice.

English majors will think of "Les Miserables." There is indeed a people's uprising, and it is valiant. And the wealthy do turn away while the poor march for justice. But Soontornvat's world includes unselfish wealthy people, too, and craven poor people. The individuals that we learn the most about are complex. The Governor is a calculating sociopath whose seemingly generous acts are so consistently self-serving that regular people have a very hard time reading him and so are blindsided by the cruelty of his logic. But even he seems plausible.

This world feels extraordinarily ordinary for a fantasy. For instance, Pong can cling to a wet ladder because the ladder is rusty. Another thing to know: Characters we like die. These deaths are not sensational and don't involve combat. They add richness and depth.

This is an action adventure with fantasy elements, and it is made emotionally engaging by the charm of natural dialog, naturalistic details, recognizable characters and underlying moral conflict. Also, and this is no small consideration, there doesn't appear to be a Soontornvat industrial complex waiting in the wings to hook kids with a series of drab sequels or sell them Spirefight Club karate clothes and glow-in-the-dark orbs (for Christmas!).

Everything a landmark middle-school story can be — inspired, inspiring, humorous — "A Wish in the Dark" is about choices that could puzzle some children, nagging their consciences over time and becoming a frame of reference for adulthood: a story that whispers, "You are important. Everyone is important."