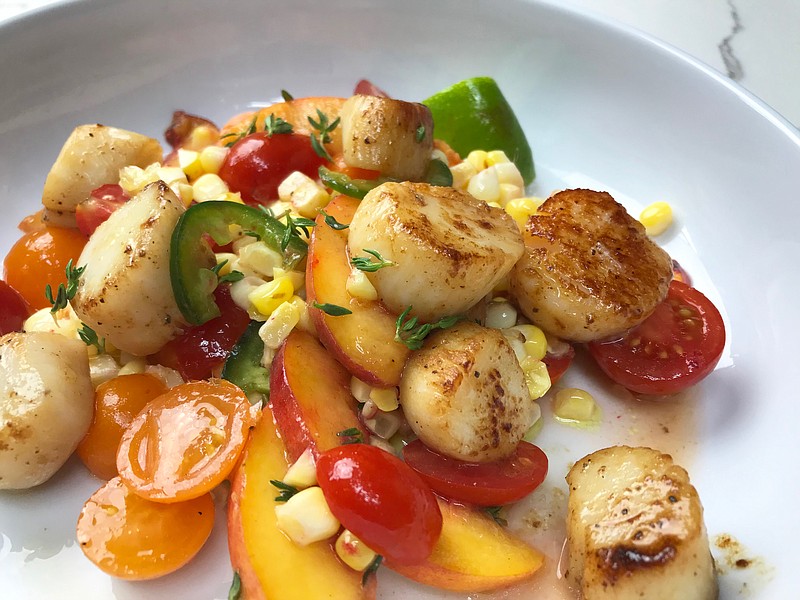 This recipe tastes indulgent but is actually quite simple. Seared sea scallops served atop a bed of in-season sweet corn, peaches, tomatoes and jalapeno dressed with olive oil and lime juice. It makes my mouth water just thinking about it.

I like to heat the corn just long enough to knock the "raw" off without cooking it. You could skip this step or if you prefer, use fully cooked corn.

Most scallop recipes will instruct you to buy dry-packed scallops, which are fantastic if you can find them. But we live in landlocked Arkansas, so the vast majority of the seafood sold here will be frozen or have been previously frozen. And that means the scallops will likely be wet-packed.

Wet-packed scallops have been treated with a solution of water and sodium tripolyphosphate immediately after harvest at sea. This solution is used to preserve their texture and keep their color bright. Scallops range in hue from white or beige to pink or pale coral. The pink/coral ones are females that were spawning.

Lightly coat a grill pan or other heavy skillet with olive oil. Heat pan until smoking. Add corn and cook until lightly browned.

Cut corn kernels from the cob into a large bowl. Add the peaches, tomatoes, jalapenos and a bit of the thyme; season to taste with salt and pepper. Drizzle generously with olive oil and squeeze half of the lime over all and set aside.

Season the scallops on both sides with salt and pepper.

Heat about 1 tablespoon of oil in a large nonstick skillet until smoking over medium heat. Add the scallops in a single layer. Cook for 90 seconds and then add the butter. Once the butter melts, turn the scallops and tilt and swirl the pan to distribute the butter. Continue cooking for 1 to 2 minutes until the scallops are cooked to your liking. Avoid overcooking.

Divide the corn-peach mixture between two plates. Top with scallops. Cut the remaining lime half in half and squeeze over all. Garnish each plate with the remaining thyme.