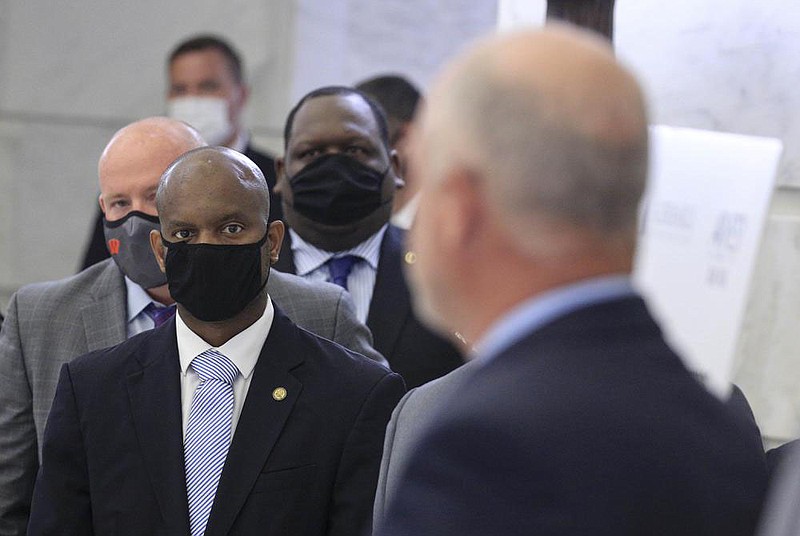 Proposed legislation to make Arkansas one of the last states in the country to penalize hate crimes received support Wednesday from two top Republican officials ahead of next year's legislative session.

Gov. Asa Hutchinson, who had previously said in June that he would sign the hate-crimes bill drafted by Senate President Pro Tempore Jim Hendren, R-Sulphur Springs, did so again during a news conference where he said Arkansas "must hold to a higher degree of accountability those who target individuals because of where they were born, how they worship or how they chose to live."

Hutchinson was joined by Attorney General Leslie Rutledge, a fellow Republican, who calling the legislation "much needed and long overdue."

Arkansas is one of only three states without any such hate-crimes law, according to the U.S. Department of Justice. The other two are Wyoming and South Carolina.

Past attempts to pass similar legislation have been thwarted over language that includes protections for gay and transgender people.

Hendren's legislation would create an enhanced penalty for crimes committed against people based on their race, ethnicity, religion, disability, sexual orientation or identity, along with other distinguishing factors such as homelessness or service in the armed forces.

Joining Hutchinson, Rutledge and Hendren at the state Capitol to promote the legislation were more than a dozen lawmakers from both political parties.

Several pointed to the killing of Brayla Stone, a 17-year-old transgender teen whose body was discovered in Sherwood in June, as an example of need for such protections.

"Family, friends and communities have been shattered by these murders," said Rep. Tippi McCullough, D-Little Rock, who is the only openly gay member of the Legislature.

Republicans also cast the bill as an attempt to improve the state's image, and were joined by Arkansas State Chamber of Commerce President Randy Zook, who said the lack of a hate-crimes law was hampering businesses' efforts to recruit workers from out of state.

"Failure to pass hate-crimes legislation and being one of the only three -- maybe worse, being the only state -- without these basic protections that the majority of Arkansans support sends a horrible message about who Arkansas is," Hendren said.

Other than Hendren, however, legislative leaders in the Republican-controlled Legislature have not said whether there is enough support to pass the bill once lawmakers convene in January.

In an interview, Sen. Jimmy Hickey, R-Texarkana, who is set to take over for Hendren as the next Senate president pro tempore, said he had not yet reviewed Hendren's bill or discussed it with other lawmakers.

The incoming House majority leader, Rep. Austin McCollum, R-Bentonville, said other Republicans were drafting alternatives toward addressing hate crimes. Those alternatives are unlikely to be based on removing protections for gay and transgender people, McCollum said, but will rather attempt to build support based on their sponsors.

"I know members are working on them, I know members are trying to figure out if there's a version that would pass," McCollum said. He added that the caucus was engaged in drafting other measures for the session, including bills to address the use of excessive force and chokeholds by police.

Lt. Gov. Tim Griffin, a Republican who presides over the Senate when it is in session, said through a spokesman that he supports tougher criminal penalties to "make Arkansans safer" but did not endorse Hendren's legislation as written.

"Legislation of this significance should not be rushed and requires a thoughtful review, including a comparison of what has and hasn't worked in other states," said the statement from spokesman David Ray.

Asked what lessons Griffin took from legislation in other states, Ray replied by repeating the previous statement.

Both Rutledge and Griffin have announced campaigns to run for governor in 2022. Hendren, who is Hutchinson's nephew, is also considering entering the GOP primary for governor.

Rutledge previously joined Hutchinson in announcing general support for a hate-crimes law at last year's Arkansas Sheriffs' Association conference in Northwest Arkansas. That conference, held in August 2019, came soon after a mass shooting at an El Paso, Texas, Walmart in which the shooter allegedly targeted Hispanics.

Rutledge said Wednesday that she was prepared to attend legislative meetings in person next year to speak on behalf of Hendren's bill.

"I believe that this is a stain on our great state and it sends the wrong message about who we are as a people," Rutledge said.

The hate-crimes bill already has drawn opposition from the Family Council, a conservative, faith-based advocacy group that released a statement Wednesday saying the law would punish "thoughts and beliefs."

"This law can have bad consequences, because it allows activists judges to use this law as a weapon to punish thoughts, free speech, and other freedoms," Family Council President Jerry Cox said in the statement. "We all wish hatred could be stopped by just passing a law against it, but this simply isn't possible. Unfortunately, this law creates more inequality by favoring special categories of people based on their sexual orientation, gender identity, and other characteristics."

A draft of Hendren's bill provided to the Arkansas Democrat-Gazette on Wednesday included four other Republican co-sponsors and 17 Democratic co-sponsors. 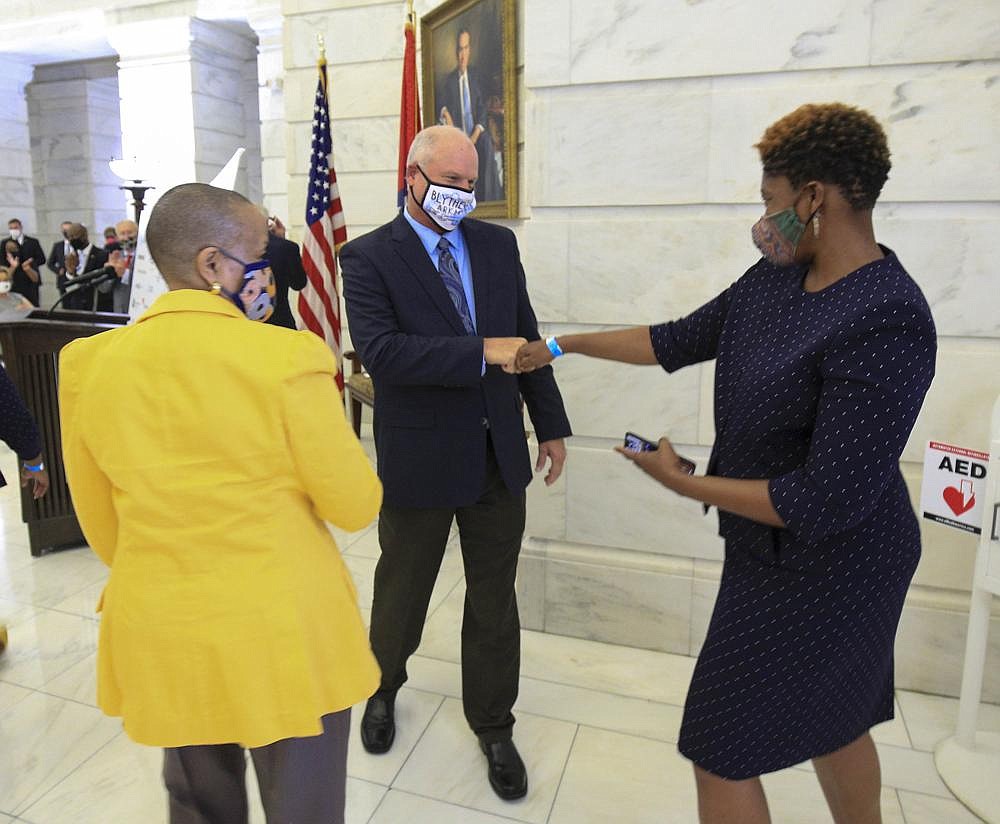 Sen. Jim Hendren, R-Gravette, fist bumps Rep. Denise Ennett as he talks with her and Sen. Joyce Elliott, both Little Rock Democrats, at the Capitol after a Wednesday news conference to reveal a draft of a proposed hate-crime bill to be considered during next year’s legislative session. More photos at arkansasonline.com/820leg/. (Arkansas Democrat-Gazette/Staton Breidenthal)
ADVERTISEMENT