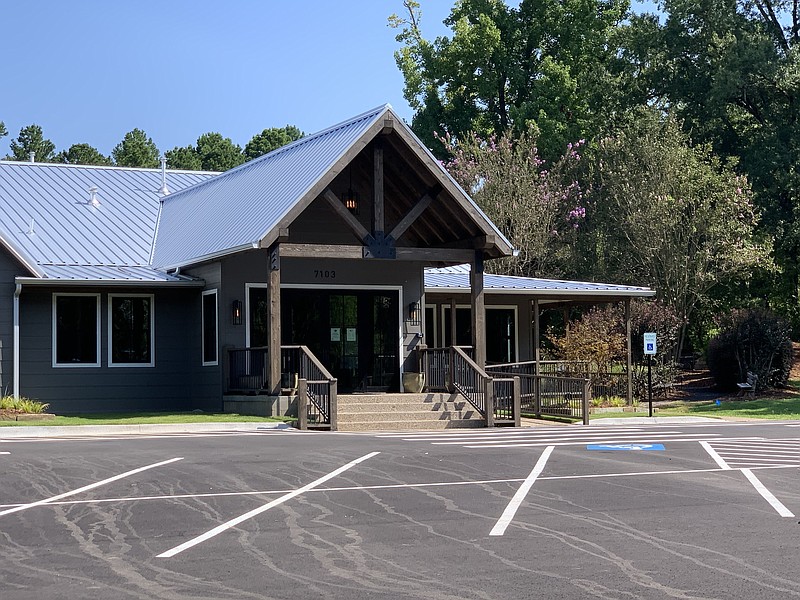 Tuesday was opening day for Cypress Social, on the former Cock of the Walk campus, 7103 Cock of the Walk Drive off Maumelle Boulevard near the point at which North Little Rock meets Maumelle. Executive chef Steve Binotti’s menu, which you can see online at cypresssocial.com, focuses on what the website describes as “one-of-a-kind fare with a Southern inspired backbone,” and includes fried green tomatoes with peppadew cheese spread; blackened shrimp and remoulade; chicken-fried frog legs; Delta-style hot tamales; oysters — on the half shell or char-grilled; a couple of steaks; a Duroc pork chop; Redfish Pontchartrain; shrimp & grits; fried catfish from “a secret 40-year-old recipe”; red beans & rice; an alligator sausage sandwich; a house burger; and fried chicken. The Facebook page (facebook.com/CypressSocial) has been touting desserts from in-house pastry chef Sara Horton. Hours are 4-10 p.m. Monday-Thursday, 4-11 p.m. Friday-Saturday, with the kitchen closing about an hour before the bar. Jim Keet of JTJ Restaurants LLC says he expects, once churches are back to opening at full capacity, that he’ll look at adding Sunday brunch. The phone number is (501) 916-2670.

Just around the corner, we have learned that the new establishment in the former South Boulevard (aka SoBo), 10840 Maumelle Blvd., North Little Rock, will be called The Hangout Grill & Bar. Alvin Watkins Jr. has applied for a mixed-drink license from the state Alcoholic Beverage Control Division. As other details surface, we’ll keep you posted.

One of our eagle-eyed colleagues reports seeing work in progress at the long-pending downtown Little Rock location of Two Sisters, 201 N. Izard St., facing LaHarpe Boulevard, and says the folks at the original Sherwood cafe (3130 E. Kiehl Ave.) told her they expect it to open in late September. A message left for the catering operation (3140 E. Kiehl Ave.) was not returned by deadline. It was originally described to us as primarily a coffee shop and cafe that might also possibly feature take-and-bake pastries. The phone number for the Sherwood cafe, currently open for drive-thru and curbside pickup, is (501) 819-0189.

And speaking of Sherwood, Darin Keith, owner of Keith & Co Artisan Sandwich Shoppe, 9B Crestview Plaza, Jacksonville, says he has a late October-early November target to open a new restaurant at 2001 E. Kiehl Ave., the long-time home of Zaffino’s. Whereas Keith & Co basically does breakfast and lunch, Bennett’s will offer lunch and dinner, with counter service for lunch and casual sit-down dining with a wait staff at dinner with a menu that will include steak, fish and pasta. Tentative hours will be 10:30 a.m.-9:30 p.m. Monday-Saturday with a 9 a.m.-3 p.m. Sunday brunch. Expect a showcase of some of the menu items on the Facebook page, facebook.com/keithandcosandwiches. The phone number of the Jacksonville shoppe is (501) 515-1313.

The folks that run Platnum BBQ, which hasn’t been operating in the River Market Ottenheimer Market Hall, 400 President Clinton Ave., Little Rock, since mid-March, recently started faring forth in a food truck with a limited menu that includes primarily the barbecue lineup they served in the Market Hall — pork and beef ribs, brisket, sandwiches and oxtails. The location changes daily; keep up via the website, platnumbbq.com, or the Facebook page, facebook.com/Platnumbbq. The phone number is (501) 457-3128.

And speaking of food trucks, we’ve noticed an uptick in the number of permit applications to the the state Health Department (https://www.ark.org/health/eng/planreview/EHP/Pulaski.htm) for “mobile food service units.” Among the ones we turned up: McIntosh Grill on Wheels, which owner Robert McIntosh III says just passed its inspections Tuesday morning and will be on the street sometime in the next couple of days, probably at first on a vacant lot in the 1900 block of Wright Avenue across from K Hall & Sons. The menu will consist primarily of burgers, turkey burgers and the sweet potato pie and lemonade McIntosh’s grandfather, Robert “Say” McIntosh, made famous. The phone number is (501) 288-9822.

We’ve recently encountered an alcoholic beverage permit application to the ABC, filed by Michael S. Rebick on behalf of JRFMLR Inc. doing business as Little Rock Hall, 721 W. Ninth St., Little Rock, the former Canon building that formerly housed Copy Systems. No other details are yet available — we don’t know if it’s a restaurant or, perhaps, an event venue. But we did learn that JRFMLR Inc. was incorporated in March in Fort Smith. Another ABC permit application we ran across in the process: a beer-and-wine permit for Octopus Sushi-Hibachi, 2050 John Harden Drive, Jacksonville.

North Little Rock’s Simmons Bank Arena, which has been pretty much closed since the pandemic arrived, has started serving lunch — sort of. It has launched a delivery-only menu, 11 a.m.-2 p.m. Monday-Friday, via Doordash, Bite Squad or GrubHub, of “selections from our premium menus and arena classics,” according to a news release. “It’s delivery only for now; we are going to work on pickup if it takes off,” says Jana DeGeorge, the arena’s marketing director. Find a full menu and ordering information at simmonsbankarena.com/arena-eats.

And In the Raw, 2747 Airport Road, Hot Springs, reopened its kitchen Aug. 6, serving what the website (intherawtestkitchen.com) describes as “raw vegan gourmet, plant-based comfort food, killer burgers & sandwiches, salads and cold-pressed juices and blenders.” Hours are 3-7 p.m. weekdays. The menu changes daily — keep up via the Facebook page, facebook.com/Intherawhotsprings. The phone number is (501) 276-8507.