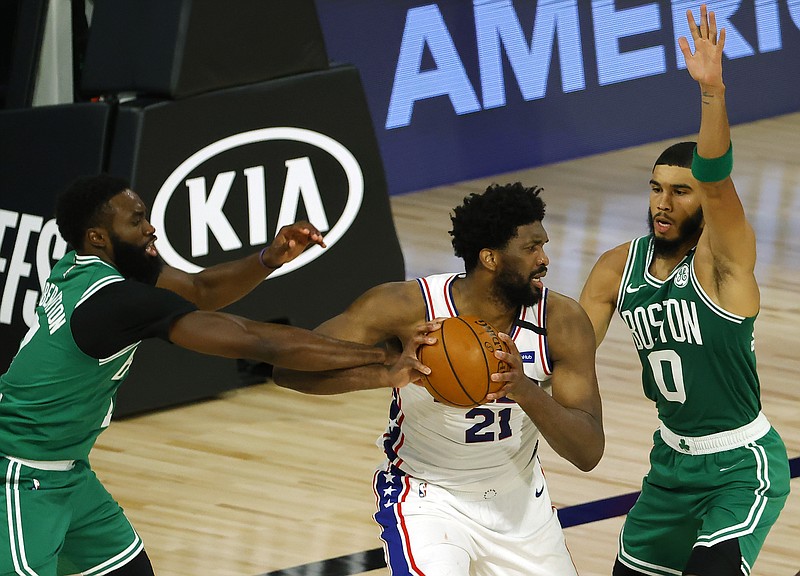 Tatum had a career playoff high for the second consecutive game after scoring 32 points in the opener Monday.

"I'm playing confident," Tatum said. "Just trying to be aggressive and trying to make the right play. I say that a lot, but that's as easy as I can break it down."

Kemba Walker added 22 points and Jaylen Brown had 20 for the Celtics, who shot 51% from the field.

"I think it got deflating when their shot-makers went bananas," 76ers Coach Brett Brown said. "I'm not going to scold their [76ers] effort. I think you've got to shake their hands -- the Celtics -- on some of the shots."

Joel Embiid had 34 points and 10 rebounds for Philadelphia, and Josh Richardson added 18 points.

"It's a long series," Embiid said. "We've got a long way to go. Obviously, this was a tough one tonight. We've got to lock in and get ready for Game 3."

The Celtics lost starting forward Gordon Hayward to a right ankle sprain in Game 1 and expect him to be out for about four weeks.

The 76ers led by 14 in the first quarter, but the Celtics rallied to lead 65-57 at halftime. Boston Coach Brad Stevens gave the reserves credit.

"Our bench took a game that was not going our way and changed it," he said.

Brown's 360-degree dunk with just under eight minutes left in the third quarter put the Celtics up 74-59. Boston extended its lead to 98-75 at the end of the period. The Celtics held the 76ers to 22% shooting in the quarter.

Donovan Mitchell scored 21 of his 30 points in a big third quarter as Utah beat Denver to even the first-round playoff series at a game apiece.

Mitchell was 10 of 14 from the floor. He helped the Jazz break open the game in the third quarter and increase the lead to 31 in the fourth.

His performance was on the heels of scoring a Jazz playoff-record 57 points in a 135-125 overtime loss in Game 1. Mitchell was the focus of Denver's defense, which helped open up other avenues for teammates.

Jordan Clarkson scored a personal playoff-best 26 points on a day the Jazz shot 51.7% from the floor. They also had 32 assists and hit 20 three-pointers.

"We stayed locked in and communicated. That's what we need the whole series," Mitchell said. "We need the same energy and intensity."

It was a rare blowout in what's been a tight showdown between the two teams all season. Despite Denver winning the previous four games, counting the regular season, the total margin was only 21 points.

"All of our games are usually close games and this one got away from us," Nuggets coach Michael Malone said. "We have to learn from it. We have to look it. We can't be afraid to look into the mirror and see why we lost. But once we do that let's turn the page."

Fred VanVleet had 24 points and 10 assists, Norman Powell had 24 points off the bench, and the defending NBA champion Toronto Raptors held on to defeat Brooklyn.

The victory gave the Raptors a 2-0 lead in the first-round playoff series.

Kyle Lowry had 21 points and nine rebounds, and he forced a big turnover in the closing seconds for the second-seeded Raptors.

The Nets were led by Garrett Temple's 21 points.

The Raptors raced to a 33-point second quarter lead in Game 1 and blew out the Nets 134-110 after converting a franchise playoff record 22 three-pointers on 44 attempts.

But this game was much closer as the Nets built a 14-point lead in the first quarter.

The Raptors didn't take their first lead until nine minutes remained when OG Anunoby drove the lane and scored on a left-handed dunk. Toronto was in control after that, stretching the lead to eight on Powell's drive and dunk from the right wing.

The Nets would have had a final shot to send the game into overtime after Timothe Luwawu-Cabarrot's three-pointer with 40 seconds left trimmed it to 102-99 and Toronto was called for a shot-clock violation on the ensuing possession. But Lowry swiped the ball away on a handoff near midcourt, and Powell came up with the loose ball and scored on a breakaway dunk to seal the win.

Luka Doncic scored 28 points, and Dallas beat Los Angeles to even the Western Conference playoff series at a game apiece.

Two nights after scoring 42 points in the highest-scoring debut in postseason history, Doncic played just nine minutes in the second half because of foul trouble. He finished with eight rebounds and seven assists.

Kristaps Porzingis added 23 points for the Mavericks. They beat the Clippers for the first time in five meetings this season and earned their first playoff victory since 2016.

Kawhi Leonard had 35 points and 10 rebounds for the Clippers. They played without starting guard Patrick Beverley (Arkansas Razorbacks) because of a calf injury. 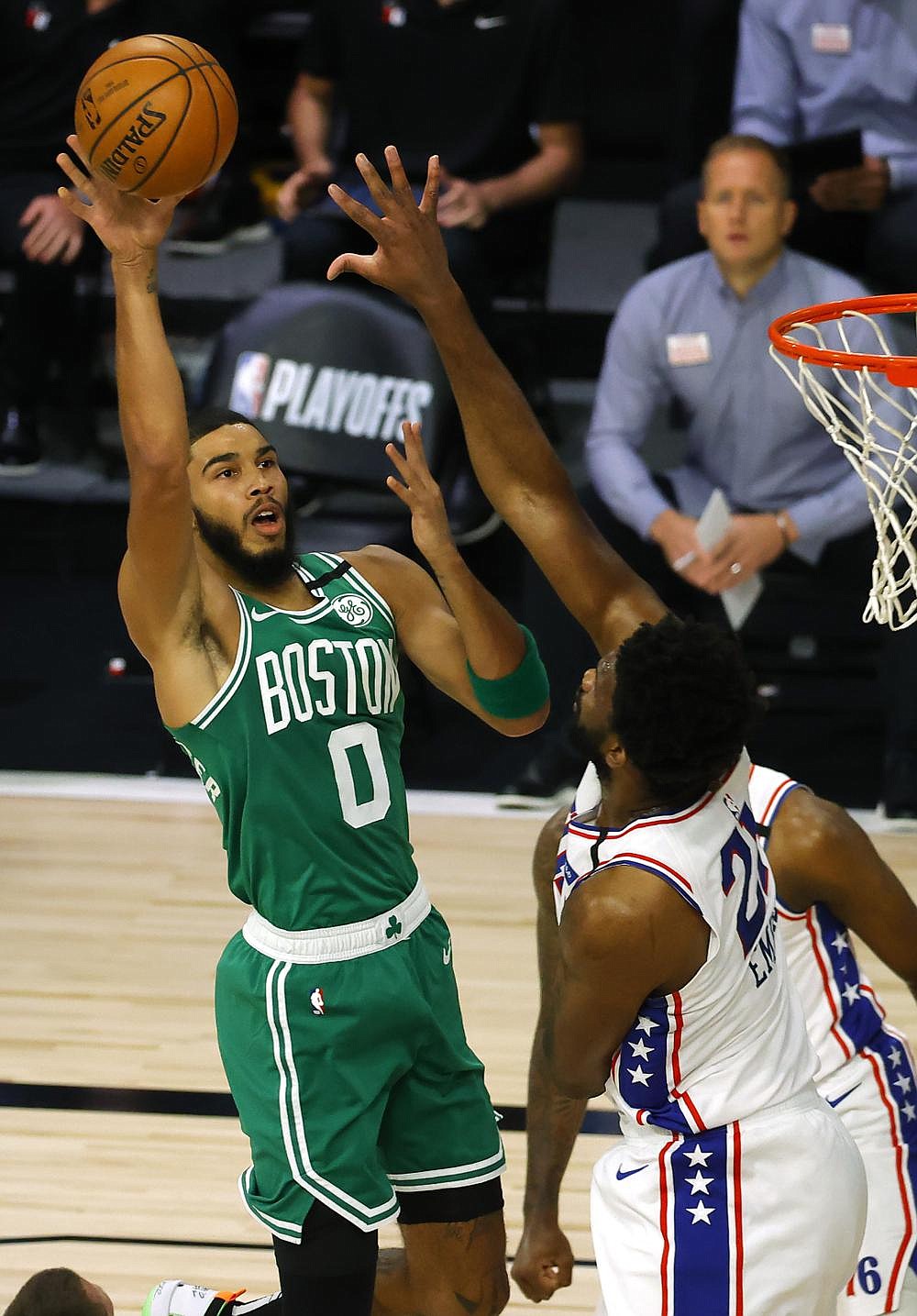 Jayson Tatum (left) of the Boston Celtics shoots over Joel Embiid of the Philadelphia 76ers during the Celtics’ victory in the NBA Eastern Conference playoffs Wednesday night at Lake Buena Vista, Fla. Tatum made 8 of 12 three-pointers and led the Celtics with 33 points. (AP/Kevin C. Cox) 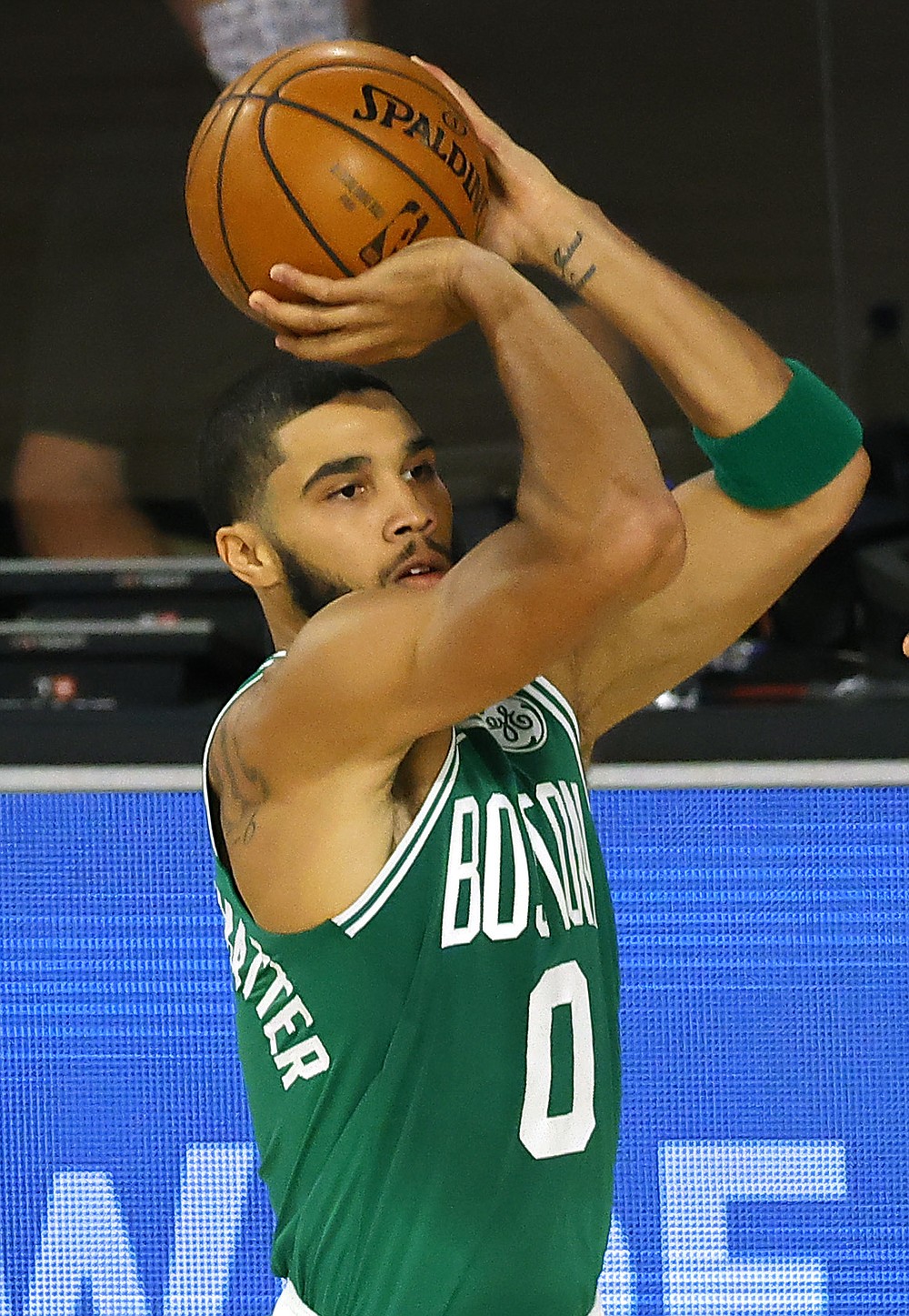 Jayson Tatum of the Boston Celtics shoots a three-point shot against the Philadelphia 76ers during the first half of Game 2 of an NBA basketball first-round playoff series, Wednesday, Aug. 19, 2020, in Lake Buena Vista, Fla. (Kevin C. Cox/Pool Photo via AP) 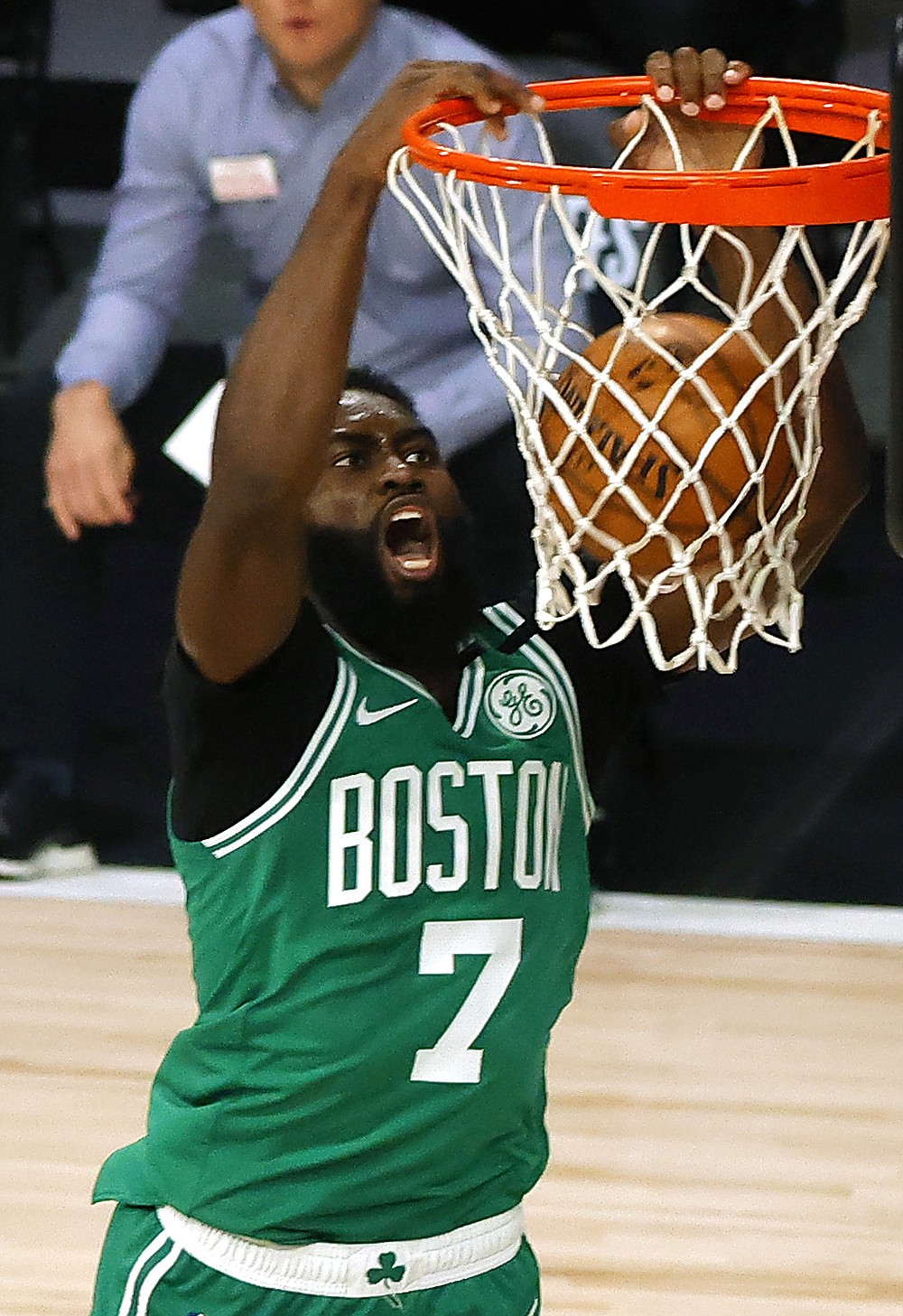 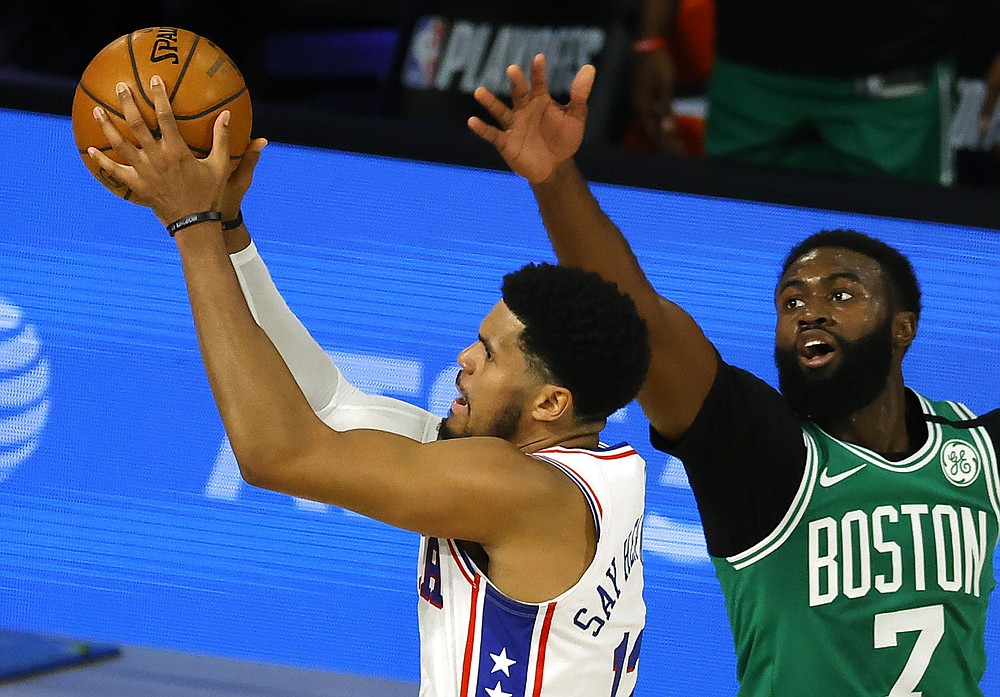 Tobias Harris, left, of the Philadelphia 76ers goes up for a shot against Jaylen Brown, right, of the Boston Celtics during the first half of Game 2 of an NBA basketball first-round playoff series, Wednesday, Aug. 19, 2020, in Lake Buena Vista, Fla. (Kevin C. Cox/Pool Photo via AP) 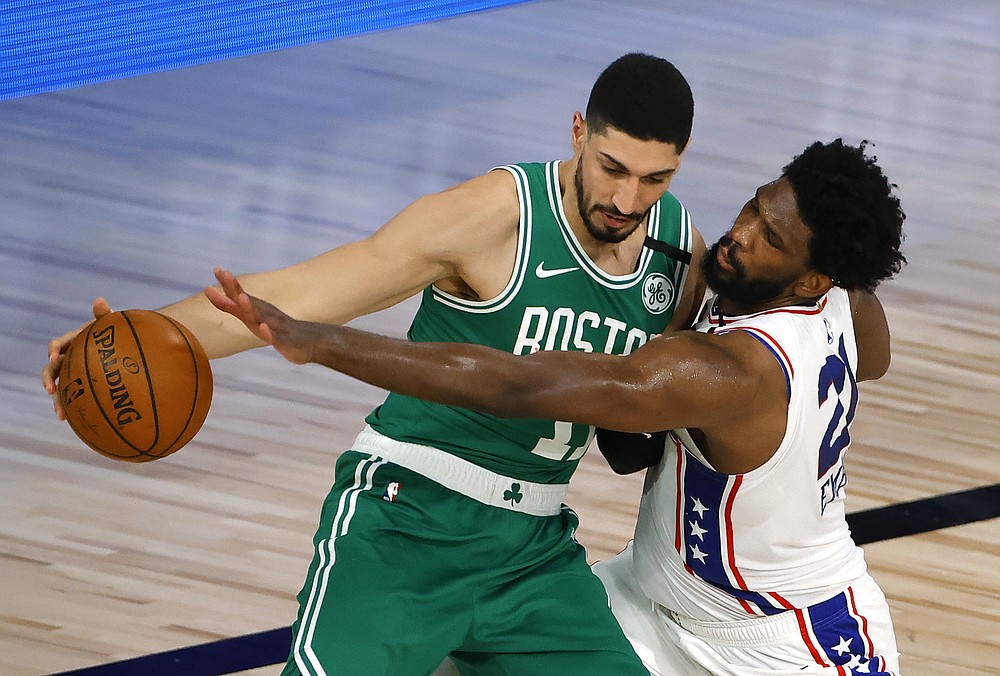 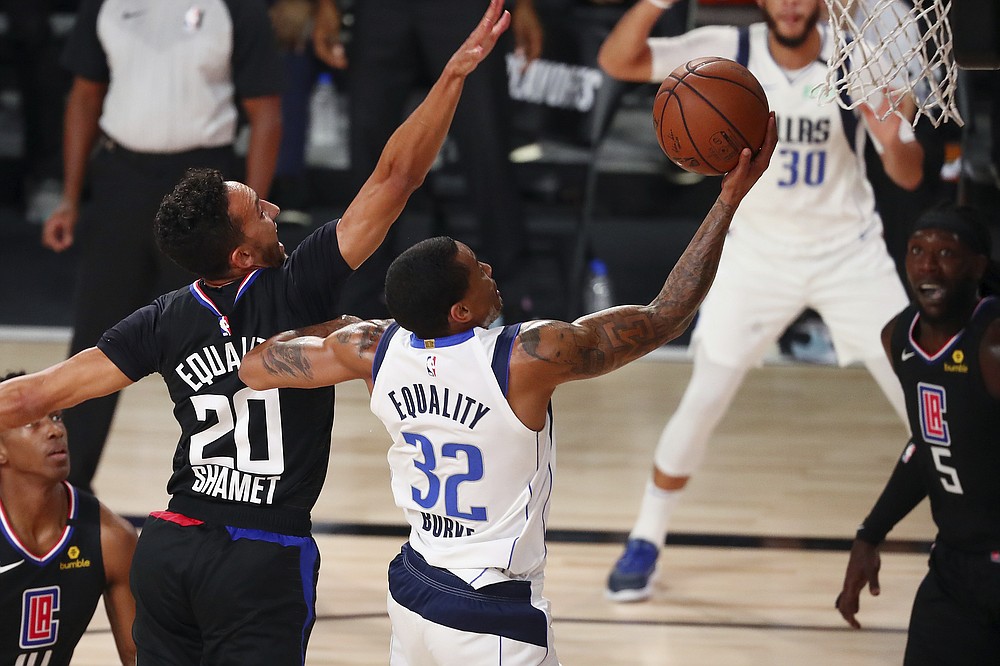 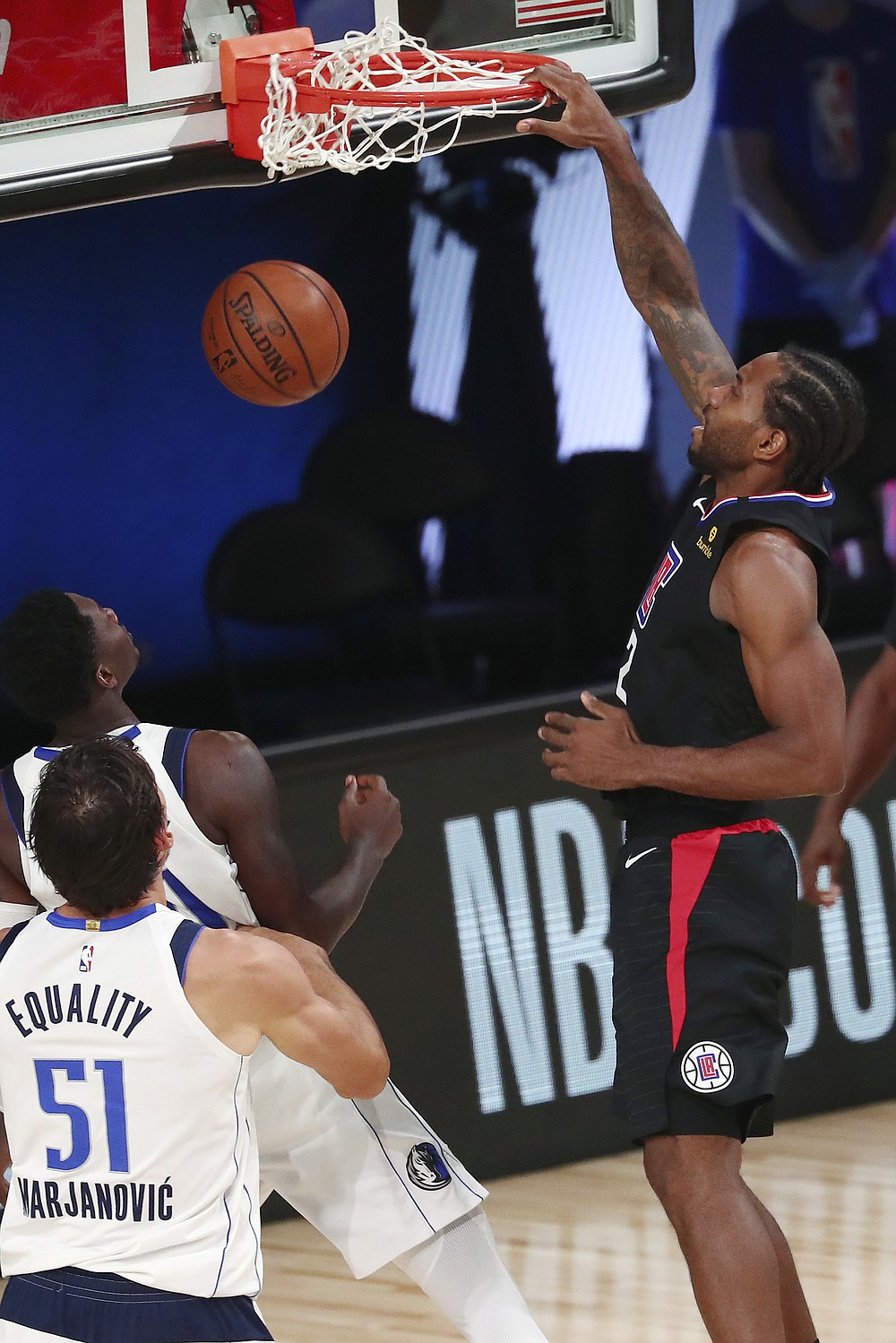 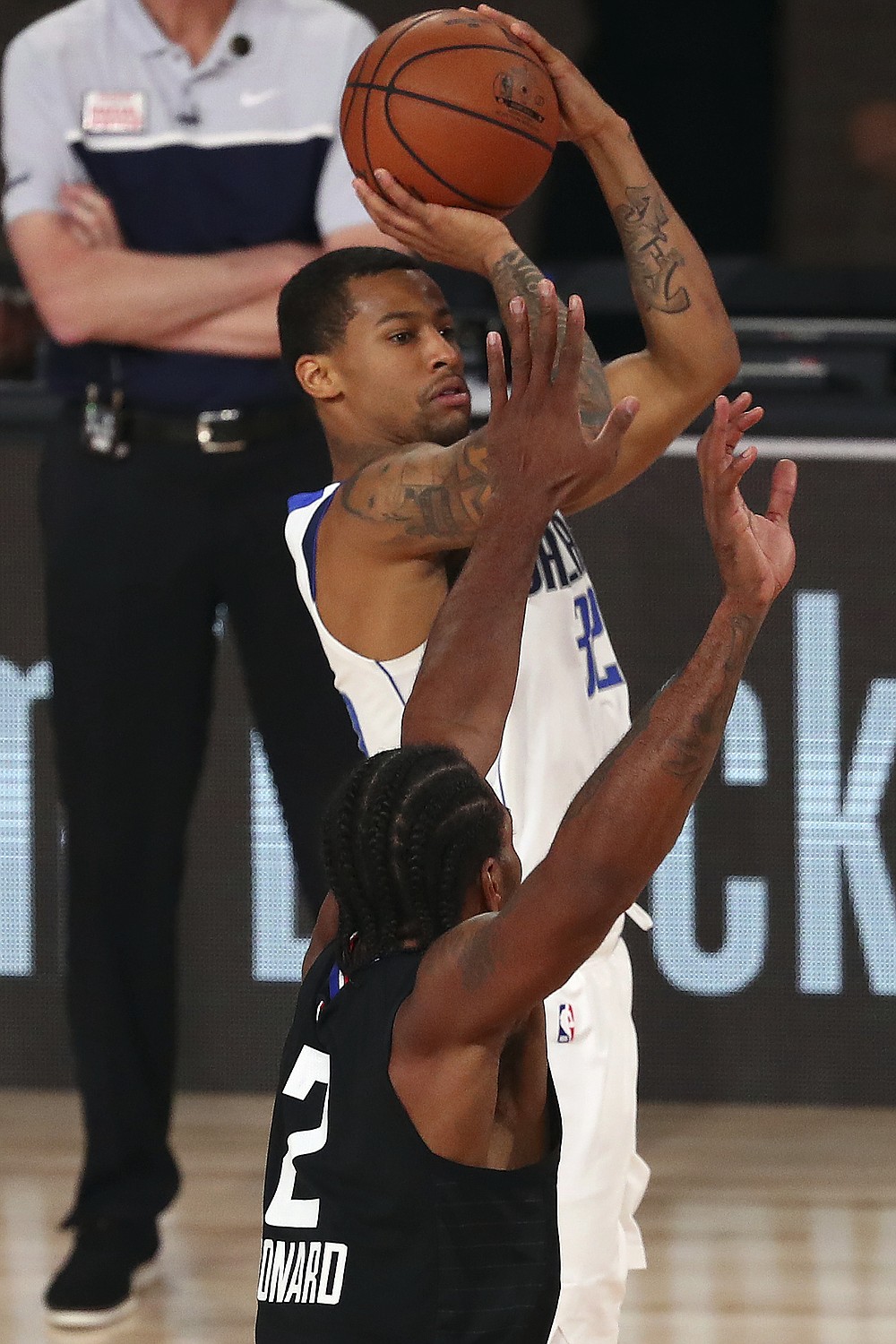