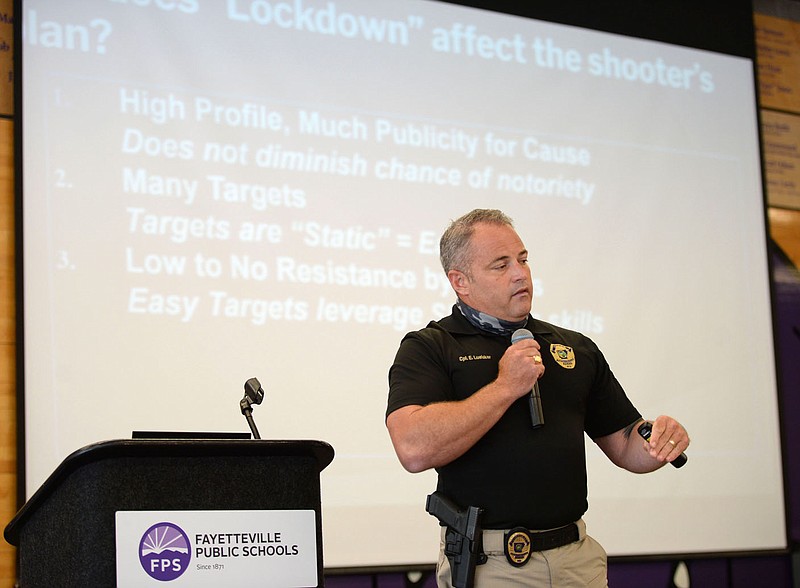 Cpl. Elliot Luebker of the Fayetteville Police Department and a school resource officer assigned to Ramay Junior High School, speaks Wednesday while describing strategies the department suggests to use during an active-shooter situation during orientation for teachers new to Fayetteville Public Schools. Teachers attended workshops and received instruction as well as gift bags ahead of the upcoming school year. Visit nwaonline.com/200806Daily/ for today's photo gallery. (NWA Democrat-Gazette/Andy Shupe)

FAYETTEVILLE -- Residents shared a variety of perspectives Tuesday during a discussion on whether the city should accept a grant to hire two more school resource officers.

The council voted 7-1 to table the issue indefinitely, essentially killing the measure. Mark Kinion cast the sole vote against tabling. The deadline to accept the grant money was today.

The city has seven school resource officer positions. The $250,000 federal grant council members discussed would have covered part of the expense of hiring two more.

Police Chief Mike Reynolds, along with three of the department's school resource officers, and Fayetteville Public Schools Superintendent John L Colbert and Board of Education President Nika Waitsman, all presented to the City Council before public comment began Tuesday.

Colbert said the School District has partnered with the city for 23 years on the school resource officer program. The district also employs 27 counselors, five social workers and partners with Ozark Guidance for assistance, he said.

The district takes statistics on student arrests seriously, Colbert said. He said he spoke with a number of students about their feelings regarding school resource officers.

"They said, 'We need them because we feel safe. They protect us,'" Colbert said. "These are students telling me SROs are very, very important to the Fayetteville Public Schools system."

The Police Department last week released statistics on school resource officer arrest activity. The numbers showed more than half of the 199 arrests made since 2016 were of Black students. The majority of those arrests resulted in a citation and the student being released to parents or guardians.

Nearly 60 residents spoke to the council via Zoom for a public comment period that lasted about four hours.

Stephen Coger with the Arkansas Justice Reform Coalition said the temptation was for city officials to side with school administrators, but in this instance, the administrators were wrong, he said.

"I have no doubt that our SROs are good people on the whole, but that does not change the fact that we do not need any more cops in school," he said.

Monique Jones, president of the Northwest Arkansas branch of the National Association for the Advancement of Colored People, told a story of her son. Another child had been bullying him, and when he grabbed a pair of scissors to defend himself, a teacher saw him and called a school resource officer, she said. Her son was handcuffed and faced a felony charge of attempted assault, she said.

Jones said she eventually got the School Board to reinstate her son with reduced charges, but the experience left a lasting effect.

"He's currently 27 years old, and the choice by the school to have the SRO interaction continues to haunt him," she said.

Andrea Kitchen, an assistant principal at Ramay Junior High School, said most often resource officers serve as relationship builders. The officers can serve as mentors, and their role differs from that of a traditional police officer, she said.

"SROs are a last resort when it comes to disciplinary action," Kitchen said.

Joe Rocko, a parent of an adopted Black son with a developmental disability, said school resource officers always treated his son like a person, cheering with him during Purple 'Dogs football games.

The positive experience carried over into his son's daily life, Rocko said.

"It shames me that we would put these heroes, these people who sacrifice their lives for our kids, in a negative light," he said. "It kills me."

Siera Delk shared a story of a time when she was a senior at Fayetteville High School in 2012. A friend had misplaced his phone, and when she texted him, Delk said a school resource officer replied back posing as the friend, asking where and when to meet. Delk said her friend had marijuana and was arrested.

Delk went on to graduate from the University of Arkansas, went to graduate school at Arkansas State University, and joined the Arkansas Army National Guard for eight years. She said she wonders what would have happened to her future if she had gotten a minor in possession charge.

"I lost trust in the SROs at that point," Delk said. "There's this argument that if we integrate these police earlier, we are going to feel more comfortable. That is not true. You become a target."

Johanna Thomas, president of the Arkansas chapter of the National Association of Social Workers, said when school resource officers arrest students of color disproportionately, the result is a cumulative disadvantage.

Cumulative disadvantage is when children have contacts with the criminal justice system, which increases the likelihood of future interaction with the system, Thomas said.

The council supported applying for the grant in March. It rejected an amended version of the grant Aug. 4 by a 5-3 vote.

Council Member Sonia Gutierrez praised the school resource officers, but said the black and brown voices she heard stuck with her. She said she wanted to pause and re-evaluate the program.

"I'm not saying we need to get rid of it forever," Gutierrez said. "I'm just asking can we take a look, with these great ideas that were put forward while listening to these people, how could we do it different?"

Mayor Lioneld Jordan said the School Board and a superintendent he greatly admires asked for two more resource officers.

Jordan said he has always supported public safety, and praised the efforts of officers.

"They take every opportunity to improve," he said. "I'm confident they will always continue to do so."

According to statistics provided by the Police Department, 106 of the 199 school arrests made since 2016, or 53%, were Black students. Seventy-five, or 38%, were white, while 12, or 6%, were Hispanic and six more arrests accounted for other races.

Eighty-give of the 199 arrests made were for violent offenses, with 62 for nonviolent and 52 arrests made because of drug offenses, according to the department.

The city has seven school resource officer positions. The officers work elsewhere in the city when not in schools. The program had an average cost of $291,934 from 2016-2019, according to the department.