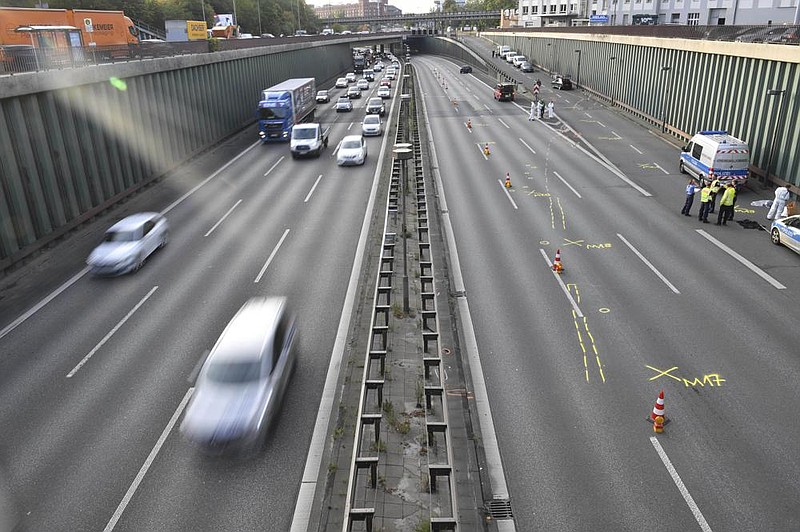 BERLIN — German authorities on Wednesday ordered a 30-year-old man accused of deliberately driving his car into other vehicles along a major Berlin highway and injuring six people moved to a psychiatric jail, as investigators continue to seek the man’s motives.

Officials said the Iraq-born man appeared to have carried out a deliberate attack late Tuesday motivated by Islamist ideology, but noted that he had been suffering from psychological problems.

The driver of a black Opel Astra struck three motorcycles on the Bundesautobahn 100, Berlin prosecutors and police said in a joint statement. He then stopped on the highway and put an old ammunition box on the roof of his car, claiming it had explosives inside, the statement said.

Three people were severely injured during the attack late Tuesday, including a motorcyclist left with life-threatening head and back injuries, prosecutor Martin Steltner said. The collisions led to the closure of one of the German capital’s main traffic arteries.

After the driver was detained, officers led hundreds of people stuck on the shut down highway away from their cars. Police used a strong jet of water to open the box the driver had put on the car’s roof, but found only tools inside.

Investigators did not reveal the man’s identity, as is customary in Germany, but media outlets identified the suspect as Sarmad D. He is under investigation over three cases of attempted murder.

KABUL, Afghanistan — Bomb attacks in Kabul and in northern Afghanistan, as well as an ambush in the country’s south killed at least five people on Wednesday and wounded 15, officials said.

Meanwhile in Puli Khumri, the capital of northern Baghlan province, a bomb targeted a vehicle belonging to the provincial intelligence department, killing two service members and wounding 11 people, including both military and civilians, said Nazir Najem, the provincial governor’s spokesman.

In southern Urozgan province, gunmen ambushed the vehicle of the intelligence chief in the city of Tarin Kowt, killing him and wounding two other service members, said Zelgay Ebadi, the spokesman for the provincial governor.

No one immediately claimed responsibility for the attacks. Kabul police spokesman Ferdaws Faramarz said one of the sticky bombs was attached to a police vehicle, while the other was attached to a car belonging to the education ministry. The police were investigating, he said.

Taliban spokesman Zabiullah Mujahid said he was not aware of the explosions in Kabul.

Meanwhile, the Islamic State group claimed responsibility for a mortar attack the previous day in Kabul that killed three people, including two government employees, and wounded at least 16, including including four children and woman.

CAIRO — A boat carrying dozens of migrants bound for Europe capsized in the Mediterranean Sea off Libya and at least 45 people drowned or were missing and presumed dead, the U.N. said Wednesday.

The capsizing, which marked the largest number of fatalities in a single shipwreck off the coast of the North African country this year, happened Monday when the engine exploded, U.N. officials said. The boat, carrying at least 82 migrants, then capsized.

Thirty-seven survivors, mainly from Senegal, Mali, Chad and Ghana, were rescued by local fishermen and later detained by Libyan officials onshore, according to a joint statement by the International Organization for Migration and the U.N. refugee agency.

The survivors reported 45 people, including five children, had drowned off the coast of the western town of Zuwara, the statement said.

COPENHAGEN, Denmark — Norway’s Foreign Ministry on Wednesday expelled a Russian diplomat linked to the case of a man jailed on accusations of spying for Russia, officials said.

“We have today informed the Russian ambassador that one of his employees is unwanted in Norway and has been asked to leave the country. This is because the person in question has performed actions that are not compatible with his role and status as a diplomat,” Siri R. Svendsen said.

It was unclear whether the expelled diplomat was the Russian intelligence officer that Norwegian authorities said was meeting with the suspected spy in an Oslo restaurant when he was arrested on Saturday.

The accused man has not been officially identified beyond that he is a Norwegian national in his 50s who was born abroad. However, Norwegian broadcaster NRK identified him as Harsharn Singh Tathgar.