Some near-misses and a few interesting also-rans 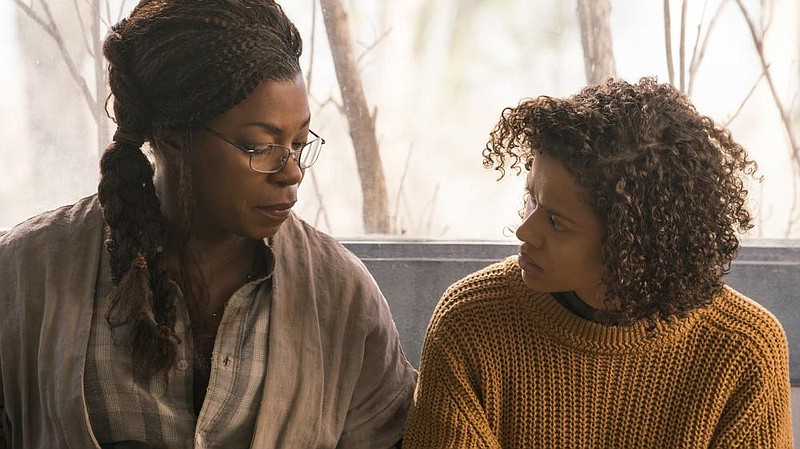 1 "Fast Colour "(2018): Julia Hart's quasi-superhero film about a young woman with powerful telekinetic energy is the kind of picture that gives you a scenario in which a great number of unusual things have already taken place, and the audience is tasked with making sense of them as information is doled out in small servings. The effect is like slowly wiping clean a window darkened with soot in order to reveal the colorful painting underneath (see also, Jeff Nichols' Midnight Special, another mysterious film about a person endowed with special powers, for reference), which can be enlivening if handled properly.

The result here is a bit hit and miss: Set in a near future in which the world is in perpetual drought, and water is rare and extremely expensive, we follow the harrowing journey of Ruth (Gugu Mbatha-Raw), a young woman, perpetually on the run, who suffers from violent seizures that cause local earthquakes wherever she is stricken. Sought out by the government, lead by a creepy scientist named Bill (Christopher Denham), Ruth eventually makes her way back to her rural childhood home, where her mother Bo (Lorraine Toussaint) has been taking care of Ruth's young daughter, Lila (Saniyya Sidney), under the watchful care of the local sheriff (David Strathairn).

There, Ruth is forced to confront the nature of her powers -- handed down through the female generations of her family -- and find resolution to the traumas that have led her psyche to run amok. As analogies go, giving such powers to a black woman, and then forcing her to stay hidden as much as possible to avoid being snatched by the government -- there are no spandex tights, or opportunity to "combat the forces of evil" in this vastly more recognizable version of the country -- works pretty well. As do the performances from Mbatha-Raw and Toussaint, which are well-grounded. It is, however, clear, that Hart, who wrote the screenplay with her husband, Jordan Horowitz, is much more interested in the interpersonal relationships than much of a cohesive plot (the ending, while affecting, doesn't make much sense, emotionally or otherwise), and the pacing of the film, which starts out promisingly slow and meticulous before hurtling past almost nonsensically in the last act, is at times awkwardly uneven. But the mystery that powers Ruth's plight, echoing the world's dried-up agony, is atmospherically rich, and the film, like its protagonists, carries a certain grace.

2 "The Last House on the Left" (1972): Wes Craven's directorial debut was so outrageously upsetting at the time of its release, it was banned, re-edited and/or blacklisted almost everywhere it played.

A protogenic example of '70s-era exploitation fodder, the film follows the horrors that befall a pair of high-school girls, Mari (Sandra Cassell), and Phyllis (Lucy Grantham), who go to NYC one night for a concert, and get accosted by a band of murderous thugs, led by Krug (David A. Hess), and his "girl" Sadie (Jeramie Rain). After a night of debauchery and rape, the crew heads out to the country with the girls locked in the trunk of their car, only to break down, unbeknownst to them, in front of the very house where Mari lives with her parents (Gaylord St. James and Cynthia Carr), who are busy putting up birthday decorations and baking a cake for their abducted daughter.

Beyond clumsy and amateurish, Craven dispenses with such niceties as plot logic and character development (in this way, disavowing the film's source material, Ingmar Bergman's "The Virgin Spring") -- though, to be fair, if such things were what you're looking for in your exploitation films, you have a long road ahead of you. Instead, the director leans heavily in favor of heavy, simulated gore, and wild juxtapositions (Hess, who also performed the contemporary-sounding songwriter soundtrack, sings Cat Stevens-esque ballads about the bloody action as it's taking place, and Craven mines much amusement out of cutting between Mari's parents frosting the birthday cake, and the thugs molesting the two young women).

The film's bloody climax, in which Mari's parents design and implement a complicated revenge campaign, takes delight in it the set-up, which involves, among other things, the father setting up a series of violent "Home Alone"-style booby traps. Despite its rep as uber-disturbing, most of its most loaded offenses seem fairly tame by today's standards -- except, perhaps, for the continually leering quality of Cravens' lens, as the film begins with young Mari in the shower behind shimmering cut glass, and makes her breasts a focal point for almost every character, including her parents, in the opening scenes. Along with other like-minded films of its era, "Last House" played the cult-movie circuit almost continuously through the decade, behind an ad campaign reminding terrified moviegoers it was "only a movie." Modern audiences won't need the disclaimer.

3 "I Don't Feel at Home in This World Anymore" (2017): Sundance love child Macon Blair (the muse of Jeremy Saulnier) makes his directorial debut with this witty dramedy.

Melanie Lynskey is a stand-out as Ruth, a somewhat oppressed nurse's aid, whose house gets burglarized, leading her to finally galvanize into action. Enlisting the help of Tony (Elijah Wood), a peculiar-but-game neighbor, she launches her own investigation, eventually leading to a blood-spattered showdown with the perpetrators. Consistently funny (with a sly turn from Blair himself as a boorish bar patron), the film actually works best when it plays more or less straight.

By the time we reach the violent climax, it feels as if we've taken a wrong turn somewhere along the way. In emulating good buddy Saulnier's bloody métier, Blair might have actually short-changed his film.

4 Steamboat Bill, Jr. (1928): While not as off-the-hook genius as Sherlock, Jr. from 1924 -- to be fair, few films in history can match up to that madcap masterpiece -- this Buster Keaton picture does have much to offer, including a great haberdashery bit, creative use of a wind machine, and only one of the most famously perfect comic stunts ever captured on film. As is often his wont, Keaton plays a guileless young man, this one named Bill, just returned to his father, Sr. (Ernest Torrence), a riverboat captain of the Stonewall Jackson, an aging vessel vying for customers with the new, elegant steamer owned by rich fat-cat J.J. King (Tom McGuire). In love with King's lithesome daughter, Kitty (Marion Byron), young Bill tries dutifully to impress her with the usual disastrous results (in typical character, Keaton plays Jr. so hapless he can barely walk up a flight of stairs without somehow trapezing to the ground). Everything changes when Sr. gets arrested for threatening King, and a massive hurricane rips through the town, blowing over buildings, sending cars and people careening down the muddy thoroughfare, and leaving Jr. flummoxing his way over, under, and through debris. It is in this inspired series of physical stunts (and strong set design), that Keaton pulls the classic building-collapses-over-hero-who-pokes-out-through-an-open-window gag that Warner Bros. stole countless times for subsequent Looney Tunes installments. The glorious sorcery of Keaton's physical stunts is the way they make such perfect kid-logic -- Why couldn't you rig up a series of rope pulleys from which to operate a giant steamship from the upper deck? Why wouldn't a car with an open canopy roof acting as a sail drag a man 30 yards down a mud-slicked road? -- with such ridiculous ease as to make the whole fantastical enterprise seem perfectly natural, as if we were watching a different set of physical laws at play. When you hear old-school film lovers speak of the "magic" of the movies, it is this sort of thing to which they're referring.

5 "Blame" (2017): Writer/Director/Editor/Star Quinn Shephard was only 20 when she made this, her feature debut, but it is impressively put-together and skillfully handled.

When Abigail (Shephard) returns to high school after a prolonged psychotic break, she is tormented by a pair of bullies (Nadia Alexander and Sarah Mezzanotte), until a new drama teacher (Chris Messina) takes her under his wing, as they prepare a condensed version of "The Crucible."

Shephard shows deft skill as a filmmaker, even as she gives herself the undeniably ego-stroking role as the beautiful-and-supremely-talented-and-misunderstood outcast. The film plays with a lot of high-school film tropes -- mean girls, misjudged wallflowers, the teacher who sees the gifted artist within -- but is smart enough to subvert them just enough to keep it feeling fresh. Things might work a tad too conveniently, but it's still the work of a young filmmaker with a lot of potential.