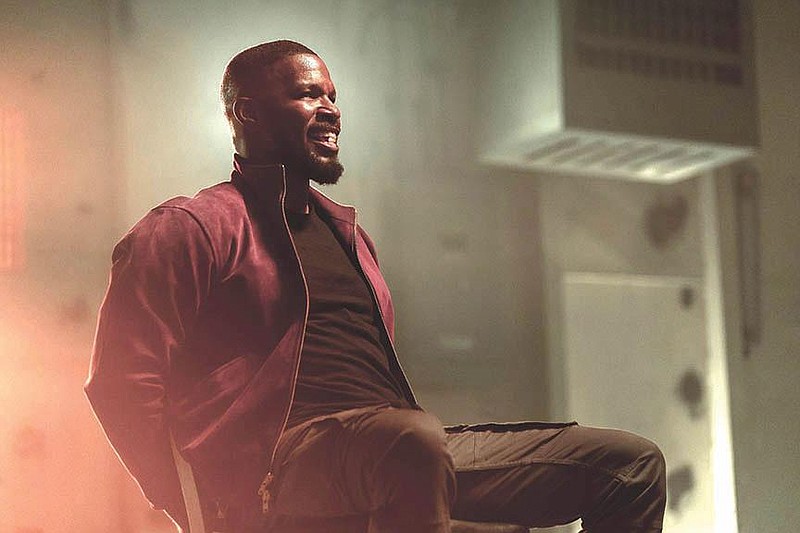 Art, aka The Major (Jamie Foxx) acquires the ability to launch directed, super-heated air that incinerates upon touch in the new Netflix movie “Project Power.”

Look! Up on the screen! It's a flop. It's a hit. No! It's another decent Netflix movie. Theaters are slowly reopening across the United States this weekend as Russell Crowe's "Unhinged" makes its debut, but I'm not particularly interested, so I'm hanging around Netflix for another week.

Jury's still out on whether I'll go see "The New Mutants" in theaters when it opens next week. I've waited a long time to see this movie, and it has been delayed and moved around more than any other flick in recent memory. But is my local AMC making me feel safe enough to venture out and see it with a mask? Undecided.

Fortunately, while the little Courtneys in my head used to personify the abstract concept of thought continue calculating how safe I feel, Netflix dropped its own original superhero movie called "Project Power."

The film is part "Limitless" and part "Lethal Weapon," with superpowers thrown in for good measure.

"Project Power" ends up being decent, thanks mostly to its main characters and some creative camera work. The special effects get the job done.

The premise is original enough: A shadowy group is distributing pills to the drug users of New Orleans. Take a pill, and you get a random superpower for five minutes ... or you might explode. Or maybe you'll get superpowers for five minutes after the first three pills. Then you'll die when you take the fourth pill. It's all a bit random and not well explained.

But boy have wristwatches made a comeback in this movie since everyone who takes a pill needs a slick way to keep track of their five minutes. BEEP, and off they go!

From what I gathered, the people who make these super pills somehow take evolutionary abilities from animals and give them to humans for a limited time. It's unclear what determines the ability people who take the drugs get. Either way, it looks like characters only get one power, no matter how many pills they take.

And, of course, if a character takes multiple pills, they'll explode or die in some other horrific manner from the overdose.

How the superpowers work was one of the movie's weaknesses because they don't explain it well. At different points throughout the movie, different creatures are shown on computer screens, the bad guys talk about animal evolution, and one of the main characters discusses being experimented on with some sort of radiation. It's all very jumbled.

Superpowers play a central role in the story, so they really should have been explained more clearly. Superman gets his powers from our yellow sun. Spider-Man gets his powers from being bitten by a radioactive spider and having his DNA altered. The basic premise of a pill giving you extraordinary abilities for five minutes is really cool. But I wanted a clear and concise explanation on who made the pills and how.

Through the movie, I got to see what I considered a satisfactory variety of powers, from tough skin and active camouflage to super strength. Some powers were kind of lame, like one guy turning into a large ... ogre thing? Not really sure what the power was there. But I liked that in a superpower lottery, some folks lose. You might get a useless ability and become Cheez-It Man, with the ability to produce limitless Cheez-Its from your hands. Or you might just die.

Where the movie shined was with its actors. Jamie Foxx plays a man named Art, who is hunting down the people who manufacture these pills after they abducted his daughter. Joseph Gordon-Levitt is Frank, a New Orleans cop who takes the pills himself to "level the playing field." And then there's this scrappy young girl named Robin, played by Dominique Fishback. She sells the pills to pay for her mother's diabetes treatment.

So really, at least one of the antagonists in this movie is the American health care system. By now there ought to be an established name for the genre of protagonists who turn to making/selling drugs to pay for necessary health care.

All three of these characters are entertaining to watch, but their stories are a little shallow.

I like to believe Foxx, Gordon-Levitt and Fishback all do the best with what they're given, but it's not much. One of the things I loved about "The Old Guard," was how well each of the five immortal warriors was developed through well-paced flashbacks revealing their histories and subtle character traits dropped here and there, like a love for Middle Eastern pastries.

In "Project Power," Foxx is simply an ex-military killer, and Gordon-Levitt is just a cop, even if he is an extremely charming officer (darn you, Gordon-Levitt). That's it, though. What else did the movie tell me about these characters? Nothing really. They are their duties/motivations. Period.

At least with Fishback, I got to see her at home taking care of a sick mother, at school being bullied by a teacher that makes Mr. Frond look competent and actually showing me her dreams to become a rapper. And let me just take a moment to say, when Fishback does her freestyle rapping in "Project Power," it's one of my favorite parts. When she's in the classroom, when she's at the vet, the words she spits are pure fire, and it was nothing short of a pleasure to see.

So while these actors get the job done, I feel like they could have really taken this movie from decent to superb if they were given a little more development.

The weakest part of "Project Power," is undoubtedly the villain ... because there isn't one, not really. Sure, there are evil drug dealers, generic henchmen, and a menacing guy with a beard, none of whom I remember well. At the end, there's this woman named Dr. Gardner (Amy Landecker) who is some sort of nefarious scientist running experiments on Art's daughter. None of them had much screen time.

Somewhere between the cool superpowers and three characters driving around New Orleans getting into fights and shootouts, the movie forgot to give me an established villain. I couldn't really point to one individual and say, "That's them. That's the head honcho antagonist." None of the bad guys get any development, and that's a big problem.

I wrote about how the main villain in "The Old Guard" was just a generic corporate guy with a lot of money, but at least I could point to him and say, "Bad guy." Easy enough. In "Project Power," I can't even do that. Talk about some sloppy writing. Now I'm a little nervous because the writer for "Project Power" (Mattson Tomlin) is also helping to write "The Batman." Let's hope he does a better job there, or I'll wish Warner Bros. had gone with Ben Affleck's original script.

One very pleasant surprise is the cinematography. There are some wildly creative shots in "Project Power." Michael Simmonds did a great job on the camera work, and it's constant throughout the movie, popping up here and there with shots that just made me smile and mutter, "Nice."

The best example comes when a woman is put inside a tank with thick glass and given one of the superpower pills. She manifests ice powers, but things start to go wrong when the heater in the tank malfunctions, causing her body temperature to plummet, and her flesh to crystallize. On the outside of the tank, I could hear Art and Frank fighting for their lives against armed drug dealers. But the fight is shot from inside the tank, just behind the girl slowly freezing to death.

And it's not a static shot, the camera follows along the glass in the circular tank as Frank and Art continue to fight, popping in and out of frame, along with those generic henchmen I wrote about a few paragraphs up. It's just a great scene.