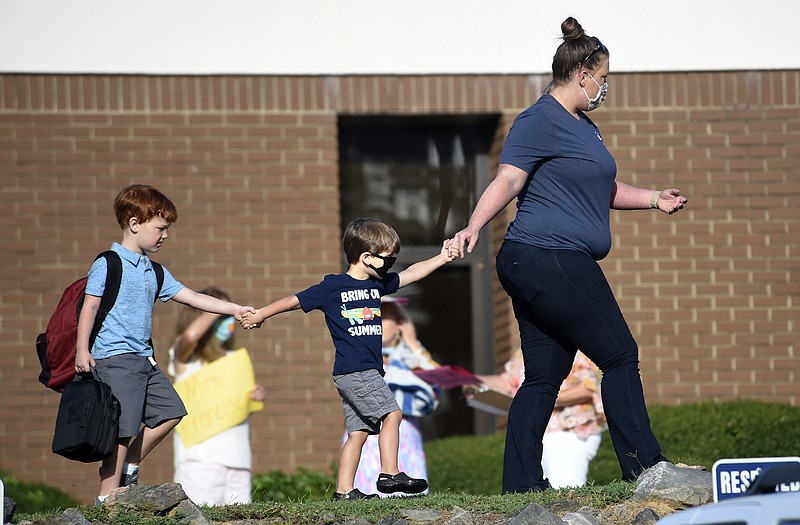 ATLANTA -- New guidance from President Donald Trump's administration that declares teachers to be "critical infrastructure workers" gives the green light to exempting teachers from quarantine requirements after being exposed to covid-19 and sending them back into the classroom.

Keeping teachers without symptoms in the classroom, as a handful of school districts in Tennessee and Georgia have already said they may do, raises the risk that they will spread the respiratory illness to students and fellow employees. Multiple teachers can be required by public health agencies to quarantine for 14 days during an outbreak, which can stretch a district's ability to keep providing in-person instruction.

South Carolina health officials also describe teachers as critical infrastructure workers, although it's unclear if any district there is asking teachers to return before 14 days.

Among the first districts to name teachers as critical infrastructure workers was eastern Tennessee's Greene County, where the school board gave the designation to teachers July 13.

"It essentially means if we are exposed and we know we might potentially be positive, we still have to come to school and we might at that point be carriers and spreaders," said Hillary Buckner, who teaches Spanish at Chuckey-Doak High School in Afton, Tenn.

Buckner, secretary of the county-level affiliate of the National Education Association, said it's unethical for teachers to risk infecting students.

Data kept by The Associated Press shows the coronavirus is spreading faster per-capita in Georgia than any other state, while Tennessee has the seventh-fastest spread. A few schools that reopened for in-person instruction in both states have already closed after cases were reported. Gordon Central High School in the northwest Georgia town of Calhoun switched to online instruction Wednesday citing a high number of teachers in quarantine.

At least five other school districts in Tennessee have given the designation to their teachers, seeking to exempt them from quarantine orders.

Tennessee Gov. Bill Lee on Tuesday blessed the move, with his administration saying it would accept the designation, citing the Department of Homeland Security's Cybersecurity & Infrastructure Security Agency.

That agency on Tuesday issued its fourth version of who counts as a critical infrastructure worker, for the first time saying teachers should be on the list alongside nurses, police officers and meatpackers.

Such workers can be permitted to keep working after covid-19 exposure "provided they remain asymptomatic and additional precautions are implemented to protect them and the community," the Centers for Disease Control and Prevention states.

"The decision is the district's," Lee, a Republican, said in a Tuesday news conference. "If they make that decision, we have given them guidance that they must follow if they choose that critical infrastructure designation."

In Georgia, suburban Atlanta 's Forsyth County has also designated teachers as critical infrastructure workers. Spokesperson Jennifer Caracciolo said that means they could be told to return to classrooms, but said the 50,000-student district will decide on a case-by-case basis.

A spokesperson for Georgia Gov. Brian Kemp said his administration is evaluating whether it wants to incorporate the federal guidance into Georgia's legal framework, which could spur more districts to act.

Critics in Georgia say the designation would ignore new health guidance issued to schools that says exposed teachers must quarantine for 14 days, even if they get a negative test.

Craig Harper, director of the Professional Association of Georgia Educators, a nonunion association, said it would be "reckless and starkly contradicts the newest Georgia Department of Public Health guidance intended to protect student and educator health and curb spread of the virus."

NEA President Lily Eskelsen Garcia said in a statement that the designation "has no legal merit and is more of a rhetorical gambit to give President Trump and those governors who are disregarding the advice and guidance from public health experts an excuse to force educators into unsafe schools."

"If the president really saw us as essential, he'd act like it," Weingarten said in a statement. "Teachers are and always have been essential workers -- but not essential enough, it seems, for the Trump administration to commit the resources necessary to keep them safe in the classroom."

Meanwhile, a paper published Thursday found that some children have significantly higher levels of virus in their airways than the most severely ill adults -- suggesting their role in community spread may be larger than previously believed.

The study in The Journal of Pediatrics comes on the heels of two others that offer insights about children and covid-19 transmission. On July 30, researchers reported in the journal that children younger than 5 with mild or moderate illness have much higher levels of virus in the nose compared with older children and adults.

Shortly before that, investigators in South Korea found in a household study that older children passed on the virus as readily as adults, while younger children did not.

All three studies were small and contradicted one another in some details, so researchers said they could not draw any definitive conclusions based on any one of them alone. But taken together, they paint a worrisome new picture of children's role in the pandemic.

Alessio Fasano, a physician at MassGeneral Hospital for Children and one of the new study's authors, said that because children tend to exhibit mild symptoms or none at all, they were largely ignored in the early part of the outbreak and not tested. But they may have been acting as silent spreaders all along.

"Some people thought that children might be protected," Fasano said. "This is incorrect. They may be as susceptible as adults -- but just not visible."

Lael Yonker, lead author and a pediatric specialist at Massachusetts General Hospital, expressed surprise that the viral loads of hospitalized adults who are usually kept isolated may be "significantly lower than a 'healthy child' who is walking around with a high SARS-CoV-2 viral load."

Of the 192 pediatric patients seen at Boston's Massachusetts General Hospital and Mass General Hospital for Children, 49 were diagnosed with acute infection and another 18 with MIS-C, the multi-inflammatory syndrome linked to the virus. The mean age of the children in the study was 10 years. The percentage of children who tested positive for the virus was about 25%, Fasano said, as compared with about 20% for adults.

Among the other preliminary findings: Age did not impact viral load [or amount of virus present] and that viral load appeared especially high about two days into the infection.

Separately, school nurses are suddenly finding themselves on the front lines as schools reopen, and they are in short supply.

The American Academy of Pediatrics recommends that every school have a nurse on site. But before the outbreak, according to the National Association of School Nurses, a quarter of American schools did not have one at all. And there has been no national effort to provide districts with new resources for hiring them, although some states have tapped federal relief funds.

Washington state is one of the places where nurses are a rarity in school hallways, with 7% of schools employing one full time, and nearly 30% of districts having one available for no more than six hours per week. Many are being asked to do more than ever before, with little in the way of new resources, training or backup.

New York City, the nation's largest district and one of the few big cities planning to physically reopen its schools on the first day back, went on a hiring spree after the city's powerful teachers' union said its members should not return to classrooms without a nurse in each of the city's roughly 1,300 school buildings.

Those nurses will be tasked with evaluating children for coronavirus symptoms and determining whether they should report to an isolation room away from other students and staff members, and communicating with parents already anxious about dropping their children off at school.

"It's weird that it takes a pandemic for people to be like, 'Oh, look at that, what you do is useful,'" said Tara Norvez, a school nurse in New York City. Norvez said she was looking forward to the start of the school year, as long as there was enough personal protective equipment and other safety measures in place.

"What we are going to do is just step up our game," she said.

Nurses fear they may contract the virus, and worry whether specially designated isolation rooms and personal protective equipment will be enough to contain outbreaks.

"Most school nurses are the only health care experts in their school community able to understand infection control and do disease surveillance," said Linda Mendonca, president-elect of the National Association of School Nurses.

"But not every school has a nurse who's going to look after the children and staff. You need that expertise as a resource to safely reopen schools."

Information for this article was contributed by Jeff Amy and Kimberlee Kruesi of The Associated Press; by Ariana Eunjung Cha of The Washington Post; and by Dan Levin of The New York Times. 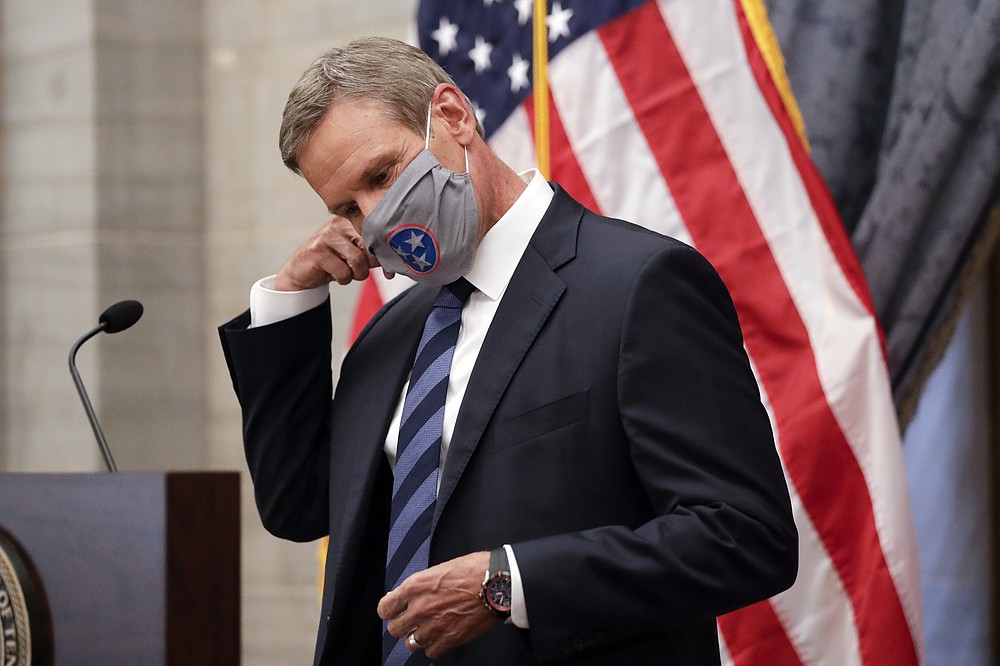 FILE - In this July 1, 2020, file photo, Tennessee Gov. Bill Lee removes his mask as he begins a news conference in Nashville, Tenn. Tennessee was one of the first states to begin reopening in late April after Lee reluctantly issued a safer-at-home order that forced businesses to close. Since then, case numbers have continued to rise in part due to more testing, but also because of an increase in community spread of the disease. (AP Photo/Mark Humphrey, File) 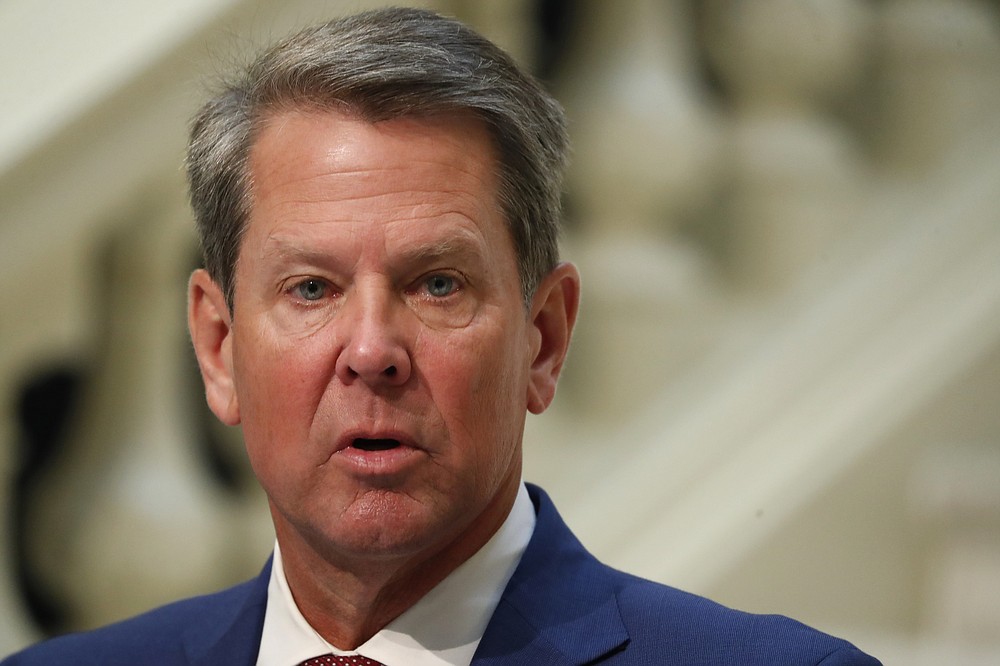 FILE-In this Friday, July 17, 2020 file photo, Georgia Gov. Brian Kemp speaks during a coronavirus briefing at the Capitol, in Atlanta. Kemp on Thursday, Aug. 13, said he’s dropping a lawsuit against the city of Atlanta in a dispute over the city’s requirement to wear masks in public and other restrictions related to the COVID-19 pandemic. (AP Photo/John Bazemore, File) 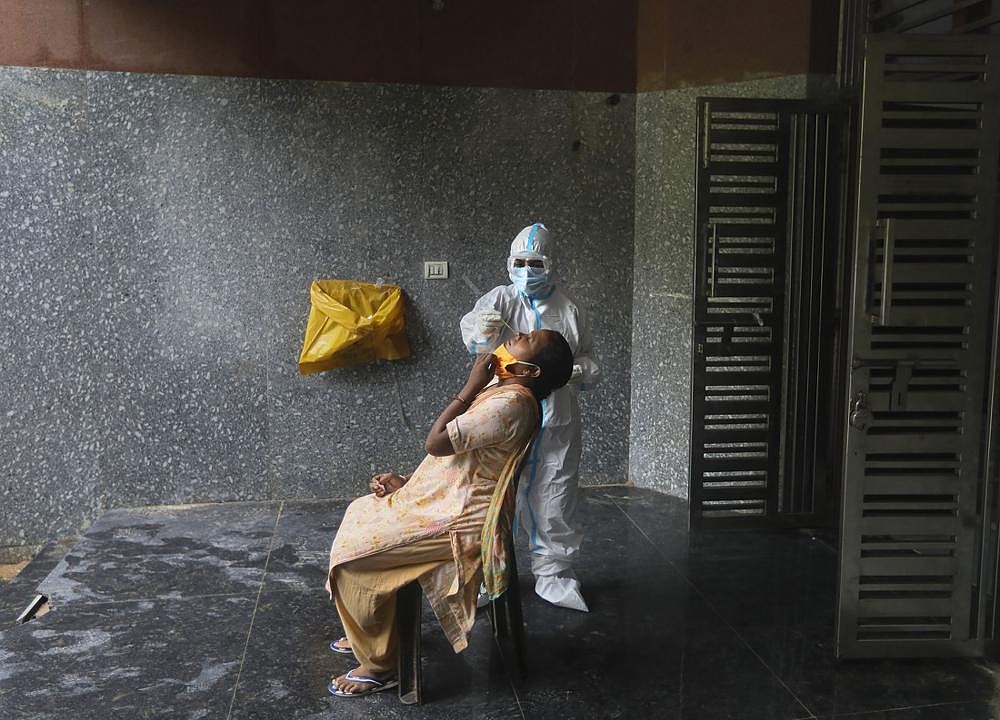 A health worker conducts a coronavirus test Thursday at a government school in New Delhi, India. The country has the fourth-most covid-19 deaths in the world and the third-most cases, with over 2.7 million. (AP/Manish Swarup)
ADVERTISEMENT