Pandemic cases back on the rise by Compiled by Democrat-Gazette staff from wire reports | August 22, 2020 at 2:01 a.m. 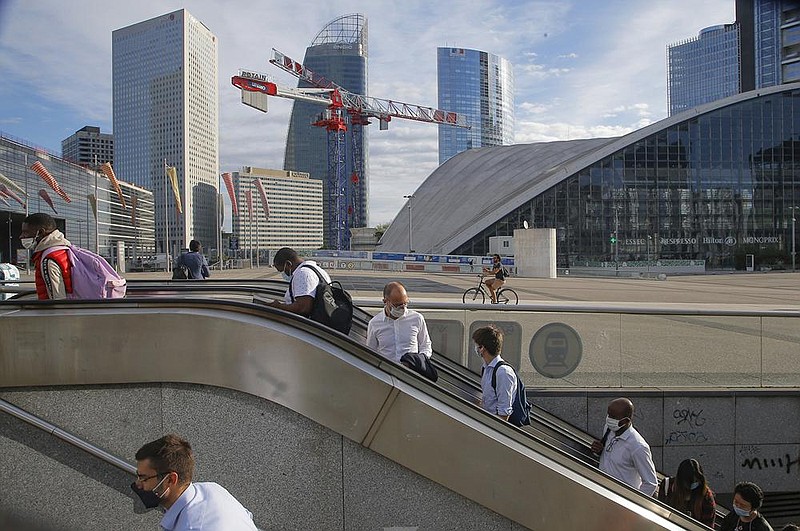 People take an escalator Friday at La Defense business district in Paris. The euro-area economy unexpectedly lost momentum this month as renewed travel restrictions and concerns about the coronavirus took a toll on services. (AP/Michel Euler)

LONDON -- The European economy unexpectedly lost momentum this month after a resurgence of coronavirus cases forced new restrictions, highlighting the challenge of rekindling growth while the pandemic remains untamed.

The sharp slowdown -- driven by services -- shows that the escape from recession won't be smooth sailing, and undermines lingering hopes for a V-shaped recovery. While infections are approaching levels recorded during strict lockdowns earlier this year, governments are reluctant to reimpose those measures.

An indicator of business activity published Friday by research firm IHS Markit fell back to a level that suggests the economy is barely growing after a relatively strong burst in July, when many countries had phased out the restrictions on public life that were imposed in the spring to contain the pandemic.

The so-called purchasing managers' index, which is based on a survey of 5,000 companies across the 19-country eurozone, dropped to 51.6 points in August from 54.9 in July. The 50 mark separates economic contraction from growth.

"The eurozone stands at a crossroads," said Andrew Harker, economics director at IHS Markit. "The path taken will likely depend in large part on how successfully covid-19 can be suppressed and whether companies and their customers alike can gain the confidence necessary to support growth."

Coronavirus contagions are rising rapidly in many European countries, even if deaths remain at a relatively low level. That has made some consumers more cautious. Europe's busiest airline, Ryanair, said this week it was cutting back further on the number of flights as demand remains low.

That suggests the European economy, which had been expected to bounce back from recession more forcefully than the United States, could take longer to heal.

The survey found that companies are cutting jobs for a sixth consecutive month, though not by as much as in April, with layoffs biggest in the manufacturing sector.

"Politically, we want to avoid closing borders again at any cost, but that assumes that we act in coordination," she said during a visit to French President Emmanuel Macron at his residence on the Mediterranean coast.

Before the meeting, Macron had told Paris Match magazine that "we cannot shut down the country, because the collateral damage of confinement is considerable." France reported 4,771 new infections Thursday, the largest daily increase since mid-April.

The eurozone economy shrank by 12.1% in the April-June period from the previous quarter but other indicators have pointed to a return to growth -- from retail sales to manufacturing. The unemployment rate has held steady thanks to aid from governments to keep redundant workers on company payrolls. Some of that aid will phase out or be reduced in coming months, meaning job losses are likely to pile up.

Florian Hense, economist at Berenberg Bank, expects no repeat of the severe first wave of contagions and restrictions on business. But the uncertainty means the economy will take time to regain strength and won't get back quickly to where it was before the pandemic.

"Governments should seriously consider to prolong, or at least phase out only slowly, furlough schemes that end this autumn," Hense said. "Otherwise the hit to employment and income could trigger a double-dip recession."

Information for this article was contributed by Carlo Piovano of The Associated Press and by Fergal O'Brien of Bloomberg News. 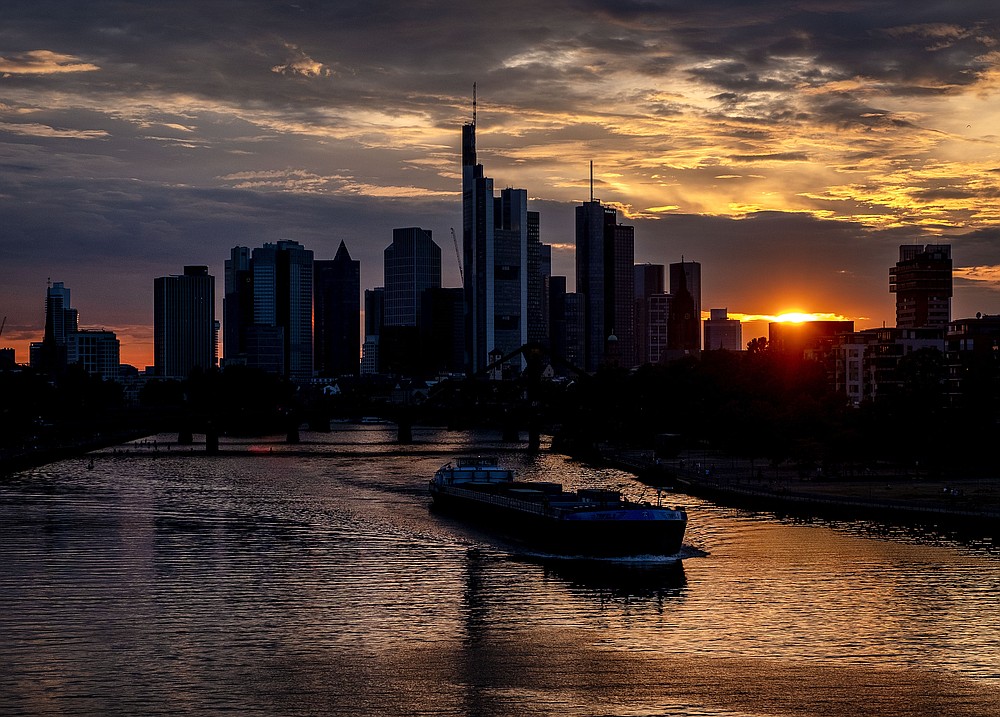 A cargo vessel cruises on the river Main with the buildings of the banking district in background in Frankfurt, Germany, after sunset on Friday, Aug. 14, 2020. (AP Photo/Michael Probst) 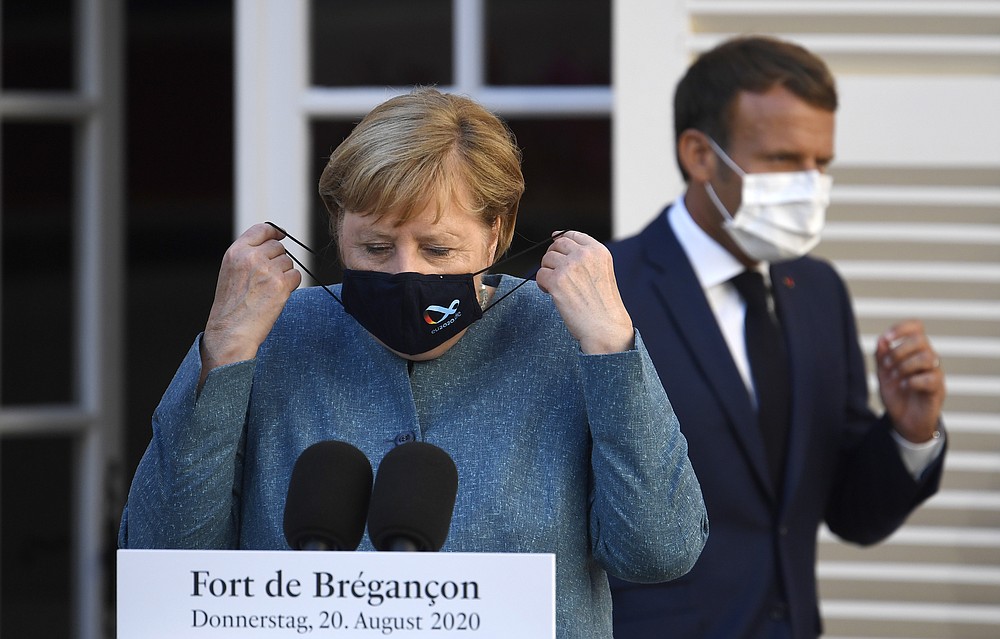 German Chancellor Angela Merkel, left, and French President Emmanuel Macron arrives for a press conference at the Fort de Bregancon, southern France, Thursday, Aug. 20, 2020. The leaders of Germany and France are meeting Thursday at a Mediterranean retreat for talks on how to resuscitate Europe's economy without causing a new virus crisis, and on a growing number of global hot spots. (Christophe Simon/Pool Photo via AP)
ADVERTISEMENT