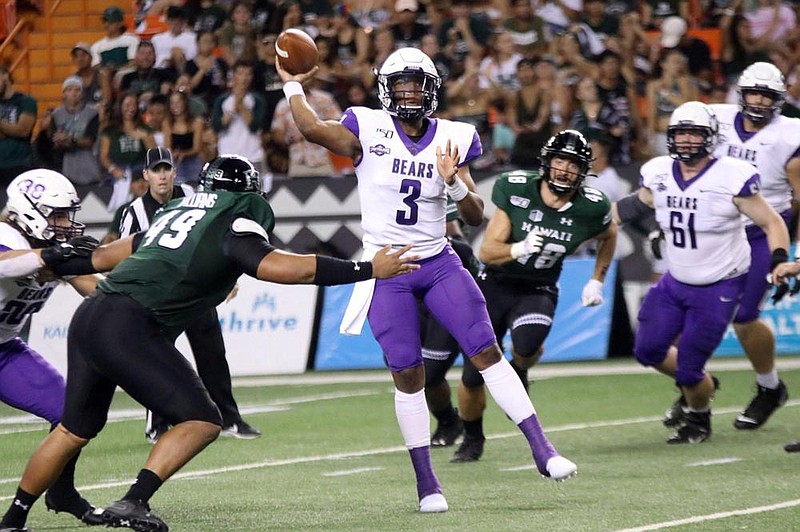 Central Arkansas quarterback Breylin Smith (3) set school records last season with 3,704 passing yards and 32 touchdown passes, but he has faced obstacles throughout his career and life. (Photo courtesy of the University of Central Arkansas)

"When your quarterback has the humility and the poise to lead your program and be the face of your university," Brown said, "then other guys are going to fall in behind him and really follow what he's trying to do as a leader."

A Conway native, Smith has become a leader worth following. He's the glue that keeps the Bears together, Brown said. And after growing up just minutes from campus, Smith is well on his way to leaving his mark at UCA, much like his mother, Dandra Thomas, did years ago.

Smith has faced a host of obstacles to become the player and man he is today -- from suffering a major injury to overcoming tragedy, with the death of his mom in 2003 and his grandfather in 2017.

His athletic ability and work ethic have never been questioned, coming from a long line of athletes. He's unafraid to seek mentorship, including from a Razorback legend. And he's become one of the most selfless players in UCA's program after being raised by his grandparents.

"I am so thankful for the way he turned out," said Smith's grandmother, Sandra. "With all the things he's been through in life, losing his mom and his grandfather, I am so proud of him. He's just a good young man. And I don't think I can say it better than that."

Smith was born to be an athlete.

His dad was a linebacker at Stephen F. Austin. His mom played both basketball and volleyball at UCA, and was inducted into the Conway High School Hall of Fame. His aunt and uncle, Mario and Micaela Thomas, both played basketball at UCA. His uncle Travian Smith played for the Oakland Raiders from 1998-2004. His other uncle, Ike Thomas, played for the Dallas Cowboys in the 70s. And his grandfather Danny Thomas played basketball at Hendrix College.

"It's sort of in his blood, for sure," said Smith's dad, Bryan. "He didn't want to lose at an early age. I knew he was going to be talented."

His grandparents raised him after the accident, trying their best to normalize the transition.

"Losing a child is not easy. And that was hard on us," Sandra said. "But our focus was on Breylin and wanting to make him feel comfortable as much as possible. He was a happy child. You hear the phrase 'it takes a village.' Well, there were so many people in Conway who helped him grow up."

One of those people was former Arkansas quarterback Ron Calcagni.

Calcagni was Smith's neighbor, living across the street from his grandparents on Savannah Park Circle. Calcagni, who had a 25-4-2 record at Arkansas, saw something special in Smith from the moment they met.

"He wanted to be the best. He wanted to learn the finer points of being a quarterback," Calcagni said. "He has that 'it' factor where he's a leader. You can trust him, he's committed and he's caring. He's an all-American young man."

Calcagni was Smith's first quarterback coach in the fourth grade and remains close with him to this day.

With Calcagni's training and Smith's determination, he soon became a standout at Conway High School. The summer before his sophomore year, he was invited to one of UCA's camps. It was then that Brown -- who was UCA's offensive coordinator and quarterbacks coach at the time -- knew he wanted Smith to be on his team.

So, at 14 years old, Smith was offered his first scholarship.

"Just by the way he carried himself, the way he went about preparation and the way that he threw the football at a young age, you knew he was going to grow into something special," Brown said. "I think it's important, especially at a program like UCA, to find hidden talent that a lot of people aren't looking at yet. And that's what we found in Breylin."

Smith was caught off guard by UCA's offer. At the time, he wasn't even thinking about playing in college. And it wasn't soon after that he received an offer to play as a preferred walk-on at Arkansas.

"I was oblivious, really. I was just playing for the pure love of the game, just for fun. And that's probably when I realized that, OK, I think this could kind of go somewhere," Smith said. "But from the get-go, I just felt at home at UCA. I really liked the relationship that I had started with Coach Brown and them being the first ones to offer me, That's what made it a pretty easy decision for me."

Smith committed to the Bears the summer before his senior year of high school. He threw for 2,333 yards that year, totaled 17 touchdowns and averaged 212 rushing yards per game.

"Not only did he have great athletic gifts, he was so mature and so polite. All around, you could not ask for a better person athletically and personally," said Clint Ashcraft, Smith's high school coach and now Conway's athletic director. "We won a lot more than we lost with Breylin. But those nights that didn't go our way, watching him kind of regroup the team was special. He was one of the guys that everyone looked up to."

It's been much of the same at UCA. But similar to when he was younger, Smith faced hardship in his first three years at UCA.

During is redshirt freshman season, on Sept. 24, 2017, his grandfather, Danny, died after suffering a brain aneurysm. He was 65.

"It was very difficult for Breylin. Danny loved him so much," Sandra said. "I think he stayed more focused on football and other things to kind of take his mind off of it.

The following year, in Smith's first season as the starter, he suffered a broken ankle in the fourth game of the season against Sam Houston State.

"He actually played the next play on a broken ankle and then went down the next play," Brown said. "But I remember going out there and looking him in the eyes and there was no fear in his eyes. That shows his competitiveness, his willingness to do anything for his teammates."

Smith looked like the kid Calcagni, Ashcraft and Brown knew he would become -- a player that's easy to rely on in moments of adversity. 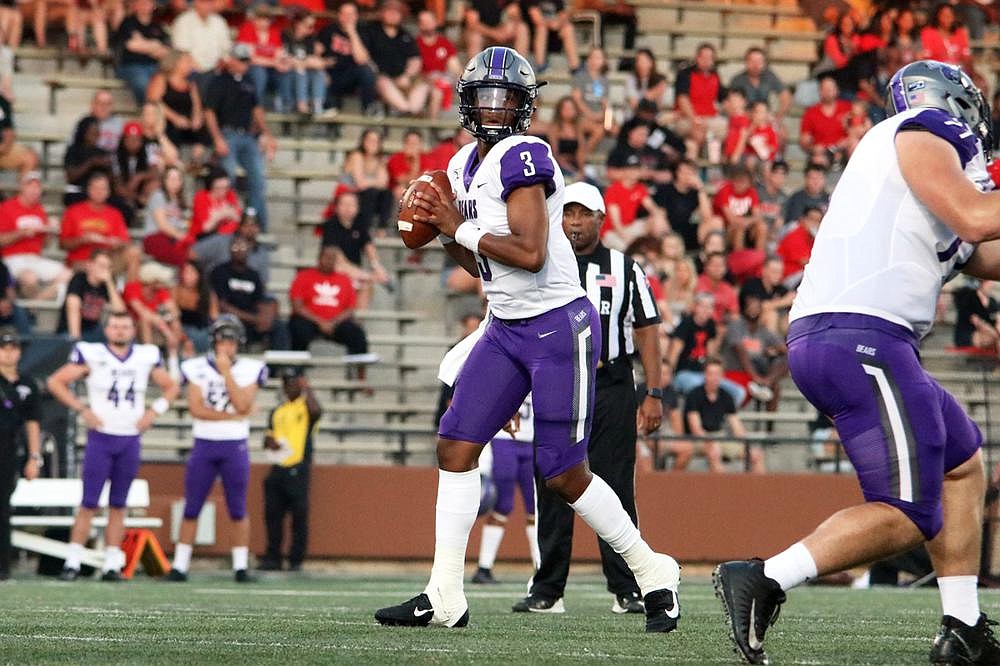 Quarterback Breylin Smith (3) was offered his first scholarship at age 14 by Central Arkansas, where he is now the starter. (Photo courtesy of the University of Central Arkansas)
ADVERTISEMENT