Virus toll of 22 an Arkansas high 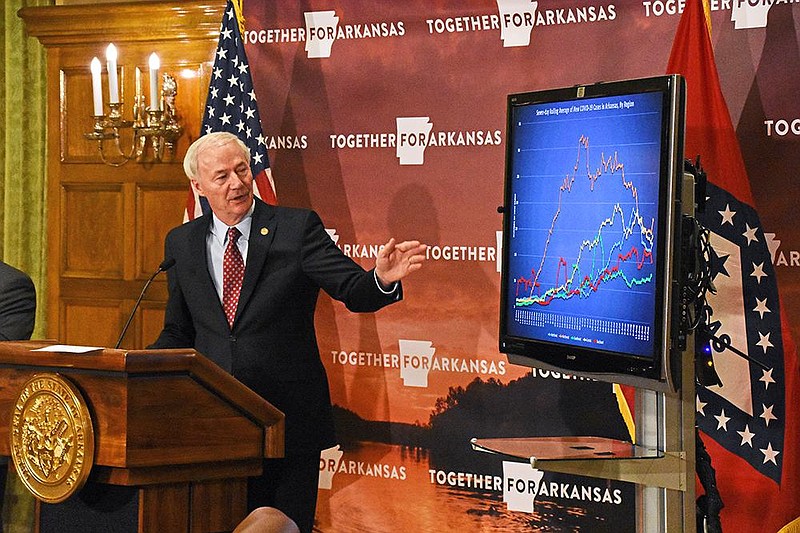 “Clearly what we’re seeing is that we’ve had a number of clusters from group gatherings,” Gov. Asa Hutchinson said Friday. “They’re not associated with schools, they’re associated with other activities that go on in the routine of life. But that is not smart, it is not good; that leads to cases and that leads to death.” More photos at arkansasonline.com/822gov/. (Arkansas Democrat-Gazette/Staci Vandagriff)

A surge in new coronavirus cases, combined with Arkansas' single-day high in recorded deaths, led Gov. Asa Hutchinson to declare "we're not back to normal" as he urged residents to halt larger gatherings and follow public-health guidelines.

The state Department of Health reported 887 new cases of the virus on Friday, the highest number in a single day this week and the fourth-highest daily increase since the pandemic reached the state in March.

While the number of active cases in Arkansas had been on the decline since early August, Hutchinson said an uptick caused by Friday's numbers was a troubling sign that some Arkansans continue to flout the state's directives.

"Clearly what we're seeing is that we've had a number of clusters from group gatherings," Hutchinson said. "They're not associated with schools, they're associated with other activities that go on in the routine of life. But that is not smart, it is not good, that leads to cases and that leads to death."

Arkansas also reported 22 new deaths from covid-19 on Friday, which is the highest number recorded in the state in a single day.

State Health Secretary Jose Romero said four of those deaths occurred in July and because of delayed reporting only became known to the Health Department over the previous 24 hours. Other late-reported deaths from earlier in August also were included in Friday's numbers, Romero said.

Half of the deaths reported by the Health Department occurred among nursing home residents, including seven people from one nursing home in Ashdown.

Romero said the "vast majority" of Friday's deaths were of people over 70.

There were 5,854 active cases of the virus on Friday, Romero said. Since the start of the pandemic, 55,652 Arkansans have tested positive. Of those, 663 have died.

[Video not showing up above? Click here to watch » https://www.youtube.com/watch?v=x5hJkSJ_44k]

The number of people hospitalized rose by 10 on Friday, to 509. There were 120 patients on ventilators Friday, an increase of 12 from the previous day.

Hutchinson defended the decision to begin the public school year next week, noting the precautions the state has taken during a two-week delay to deliver protective equipment to classrooms and Wi-Fi hot spots to students who will be participating remotely.

"We're working very hard to make sure that the schools are ready for education this year, and it takes teamwork to do that," the governor said, before adding, "The best option, because of equity concerns, is that we have the classes in the school facilities."

Still, critics of the decision to reopen schools continued to push for a last-minute delay.

In a statement Friday, Arkansas Advocates for Children and Families called for delaying the start of the school year until mid-September, then allowing school districts to open after meeting certain metrics, such as having a downward trend in the number of cases in their communities and in the percentage of positive tests among residents.

The group said that it was concerned about the safety of students and school personnel and a lack of internet access and digital literacy among students from low-income families, minority groups and special-education students. It also cited the potential for a spike in cases "in the aftermath of the Labor Day holiday."

"State data trends in COVID-19 prevalence, such as the number of positive cases and the percentage of positive tests, [have] yet to show a downward trend for 14 days, indicating that community spread is still not where it needs to be and testing is still not sufficient to reach all infected people," the group said in the statement.

On a related matter, the Little Rock School District issued a news release about infected students.

"Little Rock School District was notified today of separate cases involving four students who tested positive for COVID-19 within the community. While the students are quarantining as required by [the U.S. Centers for Disease Control and Prevention] and Arkansas Department of Health (ADH) guidelines, ADH has determined there are no direct contacts or need for quarantining within the Little Rock staff or student body," according to the release from Pamela Smith, the district's communications director.

Corrections Secretary Solomon Graves said Friday that the prison system has completed testing its entire population of prisoners after a series of outbreaks at more than a dozen facilities.

The effort to test the more than 14,000 prisoners in state Department of Corrections' custody began earlier this month with the assistance of 10 National Guard troops.

The result of that effort -- in addition to earlier mass-testing conducted where outbreaks occurred -- is the discovery of at least 5,120 coronavirus infections, more than a third of the state's prison population, Graves said.

In addition to prisoners, 378 staff members at the prisons have been positive out of the 4,728 tested.

According to the Marshall Project, an online publication that covers the criminal-justice system, Arkansas has a higher rate of coronavirus infections in its prison system than any other state in the nation.

Graves said the effort to complete mass testing at prisons where the virus had not previously been identified required 8,080 prisoners to be tested. Of the 6,699 results that have been returned, just over 4% have been positive, he said.

At least 38 prisoners have died from covid-19, according to department spokeswoman Cindy Murphy.

The two most recent deaths in the prison system occurred Friday, Murphy said. A prisoner in his 70s who was housed at the Wrightsville Unit's Hawkins Center died at Baptist Health Medical Center in Little Rock, while another prisoner in his 50s from the Ouachita River Unit died at CHI St. Vincent-Hot Springs.

Both prisoners and advocates for prison reform had criticized the department's handling of the pandemic and called upon Hutchinson and the Department of Corrections to do more to increase releases of inmates from crowded prisons and to provide better sanitation supplies to those who cannot be released.

On Friday, Graves said the Board of Corrections agreed to expedite parole consideration for 481 prisoners. That group is in addition to the more than 800 prisoners already granted early release during the pandemic.

"The men and women who live in our facilities, that is their home and over these last few months it has been a challenging time," Graves said. "They have been supportive of our efforts and largely cooperative, not just in terms of testing but also regarding the wearing of masks."

Hutchinson said the Department of Corrections will soon develop and announce a new plan for the continued regular testing of prisoners. Facilities where outbreaks are discovered will be completely tested in the meantime, he said.

"This will have to be ongoing from time to time to keep a handle on [the virus] in the future," the governor said.

The Health Department announced Friday that it will not continue to delay the expiration of medical-marijuana registry cards beyond Sept. 30.

Cards set to expire earlier this year were given an extension in April that allowed them to be used until Sept. 30. In order to renew a card before the new expiration date, the Health Department said that applications -- including an updated physician certification and $50 fee -- must be submitted to the department by Sept. 11.

Stephanie Williams, the chief of staff for the Health Department, said patients can continue to receive their physician certification through a telehealth visit until further notice.

Cards with an expiration date after Sept. 30 will expire on the date written on the card, the department said in a release.

The Health Department warned Arkansans about two incidents in which scammers posed as agency officials to try to extract payment from victims.

In one case, a caller purporting to be a contact tracer directed a person to quarantine and said the person needed to provide a credit card to get a letter of release.

"Legitimate case investigators and contact tracers affiliated with the Department of Health will never ask for payment or request any credit card or bank account information," Romero said in the release.

Calls from potential scammers can be reported to the attorney general's office at www.ArkansasAG.gov, by emailing OAG@ArkansasAG.gov or by calling (800) 482-8982.

In a separate incident, someone claiming to be an inspector demanded payment from at least one Pulaski County eatery, the release said.

If a business has questions about an inspection or a payment request, the Environmental Health Protection program can be reached during normal business hours at (501) 661-2171. Businesses can also contact police. 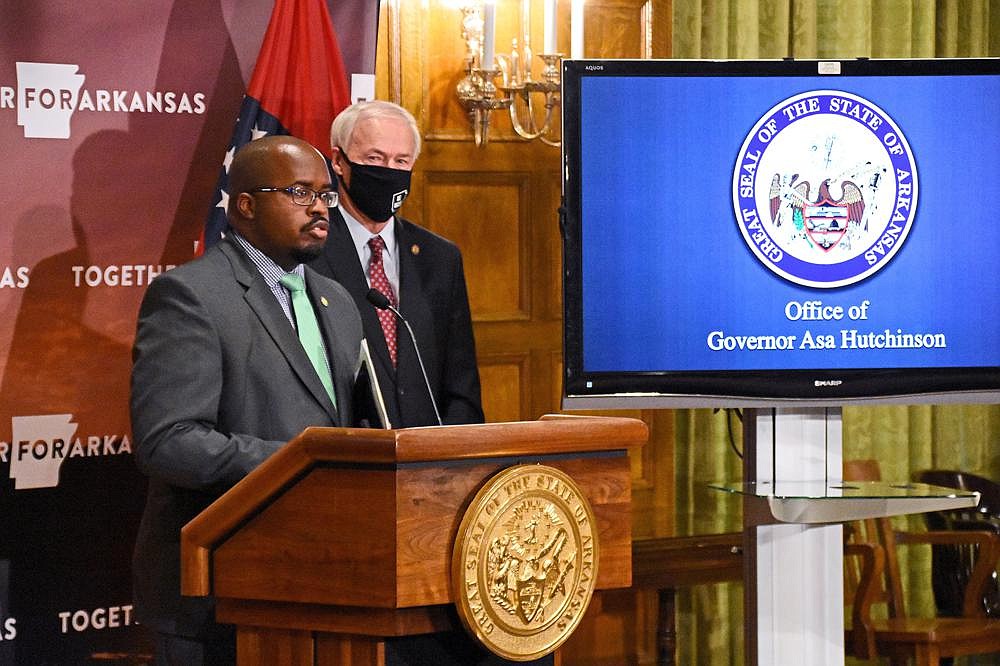 State Corrections Secretary Solomon Graves said at Friday’s briefing that the prison system has completed testing its entire population of prisoners after a series of outbreaks at more than a dozen facilities. “The men and women who live in our facilities, that is their home and over these last few months it has been a challenging time,” Graves said, adding that inmates have been cooperative with testing and wearing masks. (Arkansas Democrat-Gazette/Staci Vandagriff) 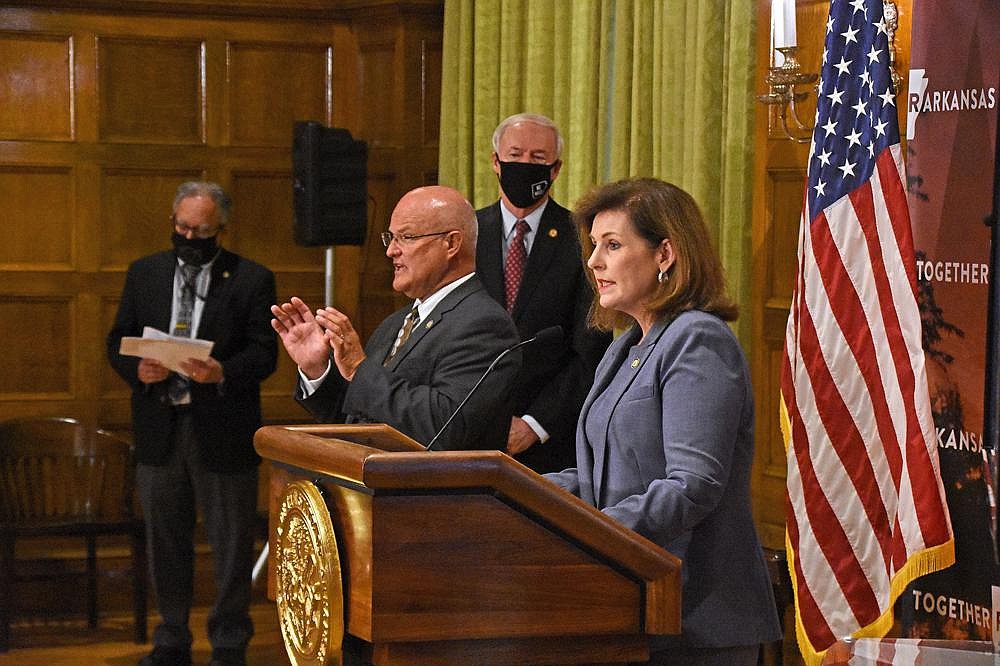 Stephanie Williams, chief of staff for the state Health Department, said medical-marijuana patients must renew their registry cards before Sept. 30 but can receive their physician certifications by telehealth visits. The certification and a $50 fee must be submitted by Sept. 11 to avoid expiration, she said. (Arkansas Democrat-Gazette/Staci Vandagriff) 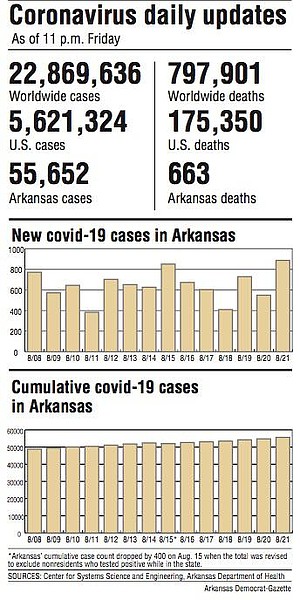