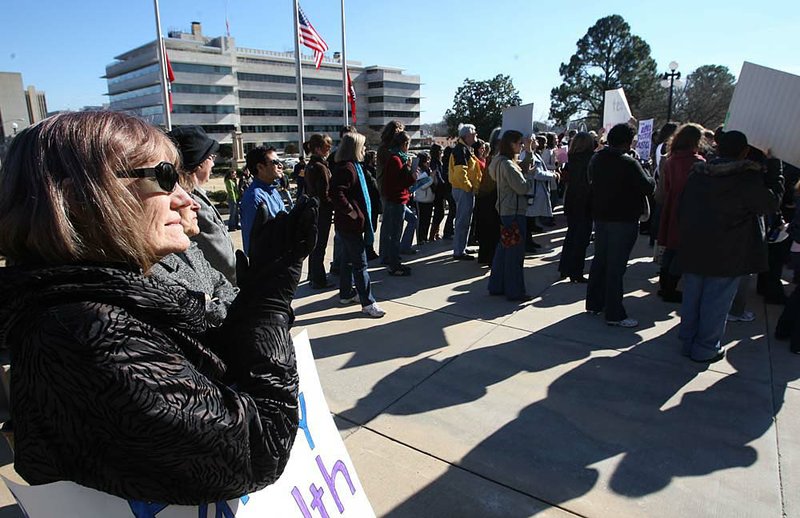 Susan Farque (left) of Little Rock and others applaud a speaker during Saturday’s Rally for Reproductive Justice at the state Capitol.

I am a social media skeptic.

I use it, in part because everyone in my business feels compelled to self-promote. And through it I've developed some rewarding relationships with readers and others with whom I wouldn't otherwise interact. It's been especially helpful since we've all been under house arrest. I usually kept a browser window open to Facebook even if I don't monitor it constantly.

But social media is a bad thing for democracy. It is very easy to abuse, and not everyone is able to differentiate between what is credible news, what is wishful speculation and what is simply a damn lie. I know people who seem reasonable enough in real life but act like jackasses on social media, pretending to credentials they don't have and sharing propaganda from dubious sources.

While it's sometimes hard to believe that they don't know that this stuff is inaccurate, I suppose sometimes they are genuinely confused. There are a lot of shops out there producing counterfeit news; even savvy consumers might get bitten once in a while. Especially if they come across exactly what they're looking to buy.

Sometimes, although I know I shouldn't, I'll engage these posters of misinformation. My motives are not pure; I am well aware that I will not change their minds or the minds of their fellow travelers. I'm doing it in the same spirit that some people antagonize phone phishers or pretend to be Nigerian princes reaching out through email for an accomplice to some great economic swindle.

I'm just entertaining myself, and maybe a few other people who understand that Chuck Shumer actually looks nothing like that man in the photo (which looks like it was taken around 1968), or that Bill Gates and Dr. Anthony Fauci were not roommates at Cornell because Gates went to Harvard and is 15 years younger than Fauci.

Or that Jeffrey Epstein made his fortune, and in fact was hanging around with the political and social elite, long before the biotech company Moderna was formed in 2010. Sigh.

While it's comical, it's also extraordinarily sad. I know what Mencken said about the booboisie, but now we've given everyone license to broadcast their ignorance and intolerance, and tools to identify and connect with like-minded idiots so they can thumbs-up each other's memes (apparently grown-up people think it not only appropriate but witty to communicate in second-hand memes).

Who takes these people seriously?

Enough to have at least temporarily scuttled the American Experiment and lent a new connotative shadow to American Exceptionalism: the rest of the world solves problems we find intractable, like school shootings and covid-19, which is now the third-leading cause of death in the U.S. ahead of accidents, lung disease, diabetes and Alzheimer's. (Yep, we're different, all right.)

Last week someone asked President Donald Trump about QAnon, the conspiracy-theory group that believes he's secretly battling a cabal of elite pedophiles and child cannibals who have taken over the highest ranks of world government and economy.

He responded by asking what was wrong with battling a cabal of elite pedophiles and child cannibals who have taken over the highest ranks of world government and economy. He said he didn't know much about QAnon, but he appreciated that they liked him and that they were growing in popularity.

He's happy to have them in the Republican party, which now seems to have only one first principle: the defense and veneration of a failing businessman who parlayed a talent for shameless misbehavior into a reality TV career, then made the lateral move to politics by promoting racist nonsense about Barack Obama not being an American citizen. (Which plenty of people on social media still believe.)

They need them and their money, but they disdain them.

Just like the Republicans need Trump's base, especially now that they've run off a lot of fiscally conservative good government moderates who understand that the post office isn't supposed to turn a profit but provide a service.

They can't afford to alienate anti-science types who see wearing masks as an infringement on their liberty (as though wearing pants isn't) or squirrelly conspiracy theorists. While they probably privately believe that baby-caging Trump is a joke and a disgrace and are worried about whether he'll eventually drag them down with him, right now you support Trump or get primaried.

And you don't want that. You want to keep your phony baloney job and to have people kowtow to you because you maybe can do something for them. You like being called "honorable."

I could be wrong.

Maybe Scientologists are right about Xenu, the galatic overlord who allegedly brought billions of disembodied alien souls to the earth 75 million years ago. Can I prove it didn't happen? Maybe L. Ron Hubbard wasn't some weird science fiction writer who lived on a boat to evade prosecution by several countries and died of a stroke alone in a motor home. Maybe he really did just voluntarily discard the body he used in this lifetime and went on to bigger things.

And maybe his Republican loyalists are right about the pedophile-busting Donald Trump.

If not, each and every Republican who has not specifically opposed Trump's anti-Americanism deserves to wear the shame for the rest of their political careers. Every one of them put party and personal careerism before country. Each and every one of them welcomed QAnon and the boogaloo boys into their coalition. No wonder their only real campaign strategy is voter suppression.

Everyone who ever sits down to dinner or raises a glass of wine with these fine ladies and gentlemen will remember that forever.