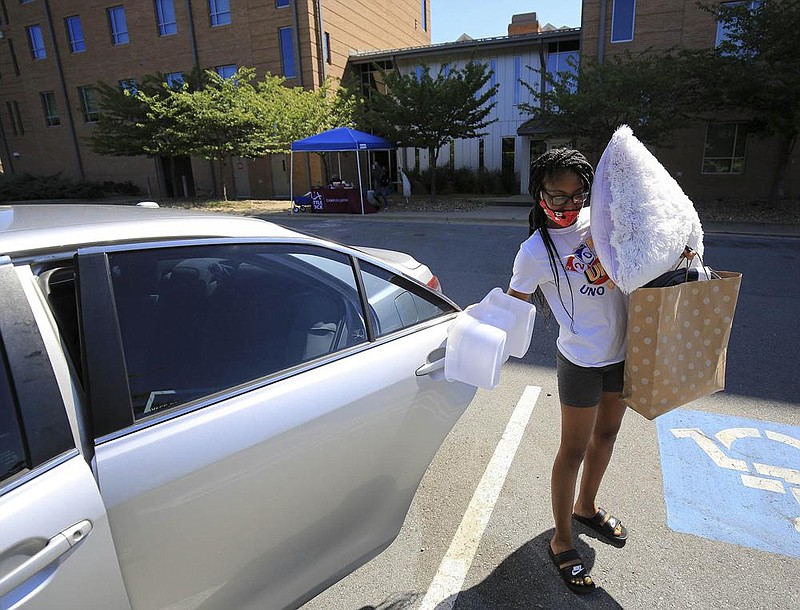 Jayla Greer, 18, from Helena/West Helena unloads items from her car Thursday while moving into her dorm room at the University of Arkansas at Little Rock. (Arkansas Democrat-Gazette/Staton Breidenthal)

A few days into the school year, some of Arkansas' public universities have begun or will begin to list their cumulative and/or active coronavirus cases.

Eight of the state's 10 traditional public residential universities responded to Arkansas Democrat-Gazette requests for information on cumulative and active coronavirus cases, and quarantine and isolation room use earlier this month.

In response to another request for updated information and information related to campus-facilitated testing, sent to those 10 schools and three community colleges with dormitories, some said they planned to publish at least some of that information online soon.

Several schools already have reported active coronavirus cases on their campuses and usage of their isolation and quarantine rooms to prevent the virus's spread, with cases more than doubling in the past week at Southern Arkansas University in Magnolia.

Arkansas' institutions of higher education are reopening their doors to students as some major universities across the nation have decided to close them after coronavirus clusters popped up on campus in dormitories and Greek houses.

In those cases, the schools had reported clusters and dozens of active cases, prompting calls, even from students, for a return to remote-only learning before the decisions were ultimately made.

Nationwide student reaction to reopening is mixed. There is excitement to return for face-to-face learning, pessimism that it won't last, frustration that students are paying the same amount of money for more online courses, and skepticism that school leaders who are deciding to reopen have students' best interest at heart.

Students told the Arkansas Democrat-Gazette that they wanted to pay less in tuition and fees for a reduced on-campus experience, that they were concerned for their own and others' health, and that they struggled to learn remotely and preferred face-to-face instruction.

Rashad Kirksey, president of the Arkansas State University Student Government Association, will attend some courses this fall on campus, where he likes to be "on the front lines" and helping students with their needs.

The senior political science major and aspiring law student is from Jonesboro and remained on campus this spring as a resident assistant for students who couldn't move off campus.

"It was very traumatic, and not just in the sense of our university but in a sense of being awake to present danger, in our face," Kirksey said.

While the Arkansas Department of Health daily reports on covid-19 cases at long-term-care facilities and correctional institutions, no such report exists for Arkansas' residential colleges, though all colleges are required to report cases to the department.

State officials have discussed having a uniform case-reporting process and dashboard for the pre-kindergarten-through-12th-grade schools, but no such dashboard has been published.

The University of Arkansas, Fayetteville has a covid-19 dashboard on its website showing five cases for the week of Aug. 10 among people who may have been on campus. Two cases were confirmed through university-affiliated tests conducted through Aug. 16, two were self-reported and one was reported to the university by the state Health Department.

SAU, which started its fall term on Aug. 11, has published a dashboard of its positive cases. As of Friday, the number of active cases was 21, more than doubled the 10 since Aug. 14.

On Aug. 14, two active cases were on campus, with those sufferers occupying two different empty rooms to quarantine from the rest of campus. On Aug. 21, the university reported that seven people sick with the virus were using isolation rooms on campus, and 13 contacts of positive cases were quarantining on campus. A total of 53 contacts are currently in quarantine.

Arkansas Tech University in Russellville and the University of Central Arkansas in Conway began posting some covid-19 data on their websites.

Tech has posted its active cases for its Russellville and Ozark campuses -- six and three, respectively, as of Friday.

UCA has posted its cumulative cases, isolation and quarantine room usage, test totals and positivity rates, with plans to update the page each Wednesday, spokeswoman Amanda Hoelzeman said. That's only some of the information the university intends to publish.

In Batesville, Lyon College, which opted at the end of July to do remote-only learning this fall, also has created a webpage showing covid-19 cases.

Before deciding to go online-only, the college signed an agreement with Austin, Texas,-based Covid Health Project to conduct 1,500 tests. The plan, according to Provost and Dean of Faculty Melissa Taverner, was to test everyone, including employees, before they arrived on campus. They would be tested in groups, with employees going first, then freshmen asked to arrive early, then athletes and then everyone else.

Larger universities in Arkansas said they will not test everyone before arriving on campus nor require everyone to be tested before they arrive, even though many universities across the South and the nation announced that they would require negative test results before permitting someone to return to campus.

Lyon College's students and employees together comprise fewer than 1,000 people. The smaller scale is why Taverner thinks the college was planning to test everyone.

As of Friday, the Batesville college had tested all employees -- nearly 200 in a single day in the gym -- and about 60 students who had applied to either live on campus or visit campus for academic activities. Of 242 tests, there were four positives. Three cases are active, and seven people have had to quarantine.

People are asked to quarantine while awaiting test results, said Shawn Tackett, head athletic trainer and the coronavirus response coordinator for the college. Tests are overnighted to a lab in Houston, and results are ready within 24-48 hours of arrival.

This fall is the first for use of dormitories at the University of Arkansas Community College at Rich Mountain and National Park College.

The college, which starts classes this week, reported two cases to the newspaper Thursday. Both of those people have recovered, it said.

On Friday, the Rich Mountain college reported seven active coronavirus cases on campus and 12 of its 101 quarantine rooms being used.

Most universities did not respond to a records request Thursday for updated data or records kept on active cases, tests administered, and quarantine rooms currently being used. Several responded the week before with numbers of active cases.

The University of Arkansas at Monticello had four active positive cases with one person in isolation on campus as of Wednesday.

The University of Arkansas at Fort Smith had four active cases as of Aug. 14, and all were quarantining off campus.

UALR had five active cases as of Aug. 14, and none of them were on campus within the 14 days before being tested, Harmon said.

UCA had six active cases as of Aug. 14, and none were in university housing. Another student tested positive last week and entered the university's isolation housing, Hoelzeman said. Seven other students were identified as close contacts and have gone into the university's quarantine housing.

ASU had 12 active cases as of Aug. 14. The university calculates its total cases by using reports from people who test positive, whether they are on campus or off campus.

About a week and a half ago, Henderson State University had not used any of its quarantine rooms for cases and reported seven student-athletes testing positive for covid-19 in July.