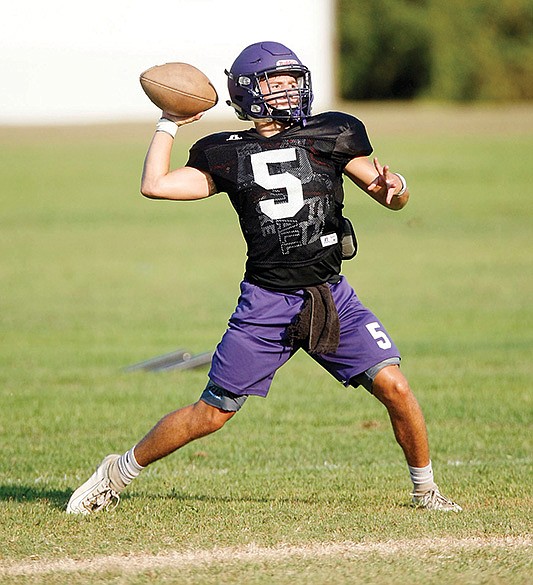 Expectations are high for the Lonoke Jackrabbits, which finished last season tied for the 4A-2 Conference title with Southside Batesville, Riverview and Central Arkansas Christian.

The conference title was Lonoke’s first since 2008 and the first for coach Harry Wright, who led his team to a 6-5 record during his first season at the helm.

But just like every team in the state, Lonoke is facing unknowns this year following the shutdown of all athletic programs from mid-March to June 1 because of the COVID-19 pandemic.

“We started June 1 with all the restrictions,” Wright said. “You had to wear a mask when you weren’t working out. We were spread out all over the place. We weren’t able to build some of that team chemistry like you normally would during the summer. On Aug. 3, we got the green light to start football drills. Then we got the green light to put pads on. It’s been a process. It’s definitely been different than any other year I’ve been a part of.

“The biggest thing I’m having problems with is speaking to the whole team without having everyone spread out. I probably say ‘spread out’ a hundred times a day. They are kids, and they want to be close. It’s been a process. We’re doing the best we can to follow the regulations.”

Normally, the Jackrabbits would have eight competition days during the summer, whether during team camps or 7-on-7 camps.

“We didn’t have any this year,” Wright said. “Feeling like you’re behind, I tell our kids all the time that we’re not the only ones who put the helmet on for the first time Aug. 3. Everybody is in the same boat. It’s an equal playing field. For a coach, you never really feel like you’re prepared anyway. You always have that feeling you’re behind.”

“That is our first goal every year,” he said. “Everyone is 0-0 right now. From my perspective, looking at year 2 of the program, my goal, a standard that I always hold these kids to is a high standard. We’ve got to get closer to reaching that.

“The kids we have now have bought in. They are representing us in the right way. I think we’re making strides in that.”

Junior Spencer Pepper returns at quarterback. A year ago, he started all 11 games, passing for 1,431 yards and 18 touchdowns while leading the team in rushing with 1,115 yards on 234 carries and 12 scores.

“We have a lot of weapons,” Wright said. “I’m excited about a lot of these sophomores. I think we’ll be more versatile than we were last year. There were a lot of games where Spencer was making plays or Anthony Parks. If it wasn’t one of those two, we weren’t able to move the ball very well.”

4 touchdowns a year ago.

“This year, we’ll be more dynamic with who we have at receiver and with Parks coming back at running back,” Wright said. “Spencer is throwing the ball better. Being that he’s a year older and a year stronger, I’ve been really impressed with how he’s throwing the ball the past two weeks.”

Wright said he expects the 4A-2 to be tough this year.

“It’s a wide-open conference,” he said. “Stuttgart will be really talented with incoming sophomores.”

Lonoke opens the season Aug. 28 against rival Carlisle. The 4A-2 Conference opener is set for Sept. 25 at home against Heber Springs.