Wolves' defense in a taking mood 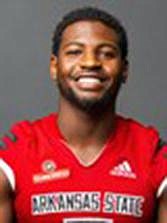 JONESBORO -- Sophomore cornerback Jarius Reimonenq roamed the sideline, repeating the same phrase over and over.

"It's a mindset!" Reimonenq yelled, high-fiving his teammates and coaches after scoring a 67-yard scoop-and-score during Arkansas State University's scrimmage Saturday.

"We've got the talent, we've got the scheme. It just started in here," said Reimonenq, pointing to his head. "Just come out ready to play. Turn the switch on to play to the best of our abilities and that's what we did today."

Reimonenq was an integral part in Arkansas State's defensive success Saturday, not only recovering a fumble but also making an interception.

The ASU defense was stellar across the board, forcing six turnovers -- four interceptions and two fumbles.

It was the confidence boost the defense needed after a poor performance in last week's scrimmage.

"The defense needed to show some life compared to what we saw last week and what we saw Monday and Tuesday," ASU Coach Blake Anderson said. "They came out with energy from the meeting we had this morning at 9 o'clock to pre-practice where you could see them bouncing around, you could feel the energy on the sideline, and you could hear guys on the sideline trying to encourage and be vocal. And that carried to the field."

The defense's four interceptions all came via sophomore quarterback Layne Hatcher, who threw one interception to Reimonenq, another to freshman Javar Strong, and two to sophomore safety Detravion Green. The two fumbles were courtesy of senior running back Jamal Jones, with Reimonenq and senior defensive back Elery Alexander recovering.

Last season, Arkansas State tied for 48th in the country in forced turnovers with 19. If the Red Wolves can improve by the slightest margin, it could be the difference between an 8-win and 10-win season.

"See ball, get ball, go score," he said. "You have to have a type of mindset to really create turnovers. It's a refuse to lose mindset. Whenever you've got a guy wrapped up, making a simple tackle, refuse to lose. He might be driving you back, rip the ball out."

The defense had its lapses, though. It gave up three 30-plus yard touchdown passes, including a 43-yarder from junior quarterback Logan Bonner to sophomore wide receiver Jeff Foreman, and a 40-yarder from Hatcher to senior wide receiver Brandon Bowling.

"Defense is a game of emotions, a game of passion, it's contagious when you do something good and do something well," said Duggan, who is entering his second season as the defensive coordinator. "We can't fix the effort. We have to have great effort. And that's what they did."

As for the offense, the solution to limiting turnovers is an easy one, according to offensive coordinator Keith Heckendorf.

"You hold onto the ball and you don't throw it to the other team," Heckendorf said. "It's a great opportunity for us to learn and grow. If everything goes perfect for you and you have your first sign of adversity in your first game, you don't know how your team is going to respond until that moment. So I'm looking forward to seeing how this team responds to the adversity we had today."

Veterans such as senior linebacker Caleb Bonner and senior defensive lineman Forrest Merrill were vocal on and off the field. And young guys such as freshman cornerbacks Taylon Doss and Kenneth Harris made plays in crucial situations.

"I think it's a start," Duggan said "The first thing you have to do is you have to get them to play hard. That's No. 1. We can't be a great defense unless you have guys playing with great effort. It can be a springboard that they can feed off and know this is what it takes to play phenomenal defense."

Just two weeks from the Red Wolves' season opener at Memphis on Sept. 5, Duggan said he wants to see more from his defense. But there's no question the defense's confidence is sky high, which is where Duggan wants it.

"I definitely think this day was a great day in determining who we are and what type of defense we're going to be," Reimonenq said. "But I think today really determined that it's OK to have fun on defense. It's OK to go around and knock somebody's head off. And just enjoy the game.

"We showed signs and flashes of being great and flying around to the ball."