WATCH YOUR LANGUAGE: Allusions don’t have to be accurate to be powerful 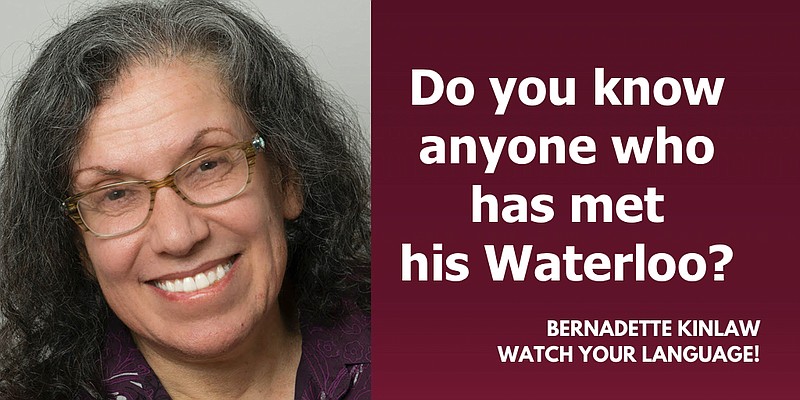 Recently, I watched a couple of documentaries about the Titanic, the supposedly unsinkable ship that sank on its first voyage after hitting an iceberg in April 1912.

Though the disaster happened more than 100 years ago, the mere mention of the ship's name and an iceberg conjures images. A speaker is able to convey an idea with a historical allusion. That's a powerful tool.

An allusion is a mention of anything from the past that helps you understand things in the present. A person warning of a looming iceberg likely doesn't truly mean a floating chunk of ice will rear up in the middle of a speech. It's a figurative disaster.

Back in 2011, dancer David Hallberg became the first American to join Moscow's Bolshoi Ballet as a principal dancer. When he appeared on "The Colbert Report," Stephen Colbert jokingly called Hallberg "a Benedict Arnold in slightly tighter pants."

Why? Because Benedict Arnold was a general in the Revolutionary Army who agreed to turn over an American fort to the British in exchange for cash. His name is now synonymous with a traitor. And apparently he wore loose pants.

Dave Odom, a college basketball coach, was interviewed for a profile of a high school basketball scout, Tom Konchalski. In describing Konchalski, Odom said, "He's Mother Teresa in long pants whose greatest loves are basketball and people. He cares about everybody."

We all know that Odom wasn't saying Konchalski was a nun or a missionary who'd help the sick and hungry, or even that he'd ever be canonized. But with the one reference, he was illustrating the goodness and selflessness of the recruiter.

Do you know anyone who has met his Waterloo?

Waterloo, in Belgium, is where Napoleon Bonaparte, an aspiring emperor, experienced his decisive and final military defeat in 1815.

And once again I found an example in The Washington Post of this historical allusion in a sports story. Hmm. Maybe they're in the sports reporter guidelines.

This reference was to PGA golfer who almost hit the bottom of the golf world.

[Chris Baker] almost met his Waterloo in, well, Waterloo. The one in Iowa.

That was in 2013. Now that was hell. "Rock bottom," he admitted. Left there nearly flat broke and a broken golfer.

I can imagine it was irresistible for this reporter to resist both the allusion and a decent pun.

Most of us are familiar with the U.S. Civil War. It was the war that divided the nation, roughly North versus South, and killed about 620,000 people.

When speakers or writers mention a civil war — with lowercase letters — they mean a huge, figurative battle breaking apart previously close-knit groups. Recently, an opinion writer who quit The New York Times described a divide within the newspaper, calling it "a civil war inside The New York Times between the younger reporters and the over-40 reporters." Of course, no one in the newsroom was planning to shoot it out.

The Nazis were the people in the fascist party of Adolf Hitler from 1933 to 1945. The term Nazi, sometimes with the lowercase n, is described in the dictionary as "a harshly domineering, dictatorial, or intolerant person."

I hate the term "grammar Nazi." No matter how hard I advocate good grammar, I'm in no way similar to a fascist. I don't even think I'm a little brutal. Maybe, just maybe, I'll accept persnickety.

Naturally, some historic allusions strain reality. You likely have heard that "Nero fiddled while Rome burned."

A couple of years ago, a sportswriter criticized Knicks president Phil Jackson for blaming NBA coaches and players for not doing enough to win. The writer said Phil Jackson was doing a good imitation of Nero. Rather than focusing on solutions, Jackson ignored the problems. You likely have heard similar criticisms of CEOs focusing on some minor venture while the company goes steadily downhill.

But the History Channel jumps in with pesky facts. Though Nero was a vicious, horrid leader, he couldn't have been playing the fiddle while he neglected the city. The fiddle had not been invented yet in A.D. 64. One historian theorized that the emperor sang while Rome burned, but no witnesses could support this.

And yet, the phrase still conveys its point. Maybe it's more of a semi-historical allusion.

You need to know something about the people you're speaking to to use historical allusions well. If your 2-year-old is not in the mood to eat the bread in a sandwich, you aren't likely to mangle the (disputed) quote from Marie-Antoinette about eating cake. Toddlers aren't likely to get the point.

It's the same as with jargon. If you're talking to a nonmedical person, would you call a scar a "cicatrix"? Not likely.

I searched The Washington Post website and found the word cicatrix used only once, in a review of a play.

Over the next 75 minutes, she asks audience members to make selections from the likes of knickknacks in a bureau and photos pegged to a clothesline. Each item refers to a particular scar on Hynes's body, such as one she sustained after being run over by a London double-decker bus. Once a selection is made, she recounts that cicatrix's backstory, creating a show that is, thus, different for each performance.

Promise me none of you will do this.

Let me know if you hear a good historical allusion.

Sources include Merriam-Webster, The Washington Post, the History channel, Britannica. Reach Bernadette at