Arkansas focusing on safety of voters 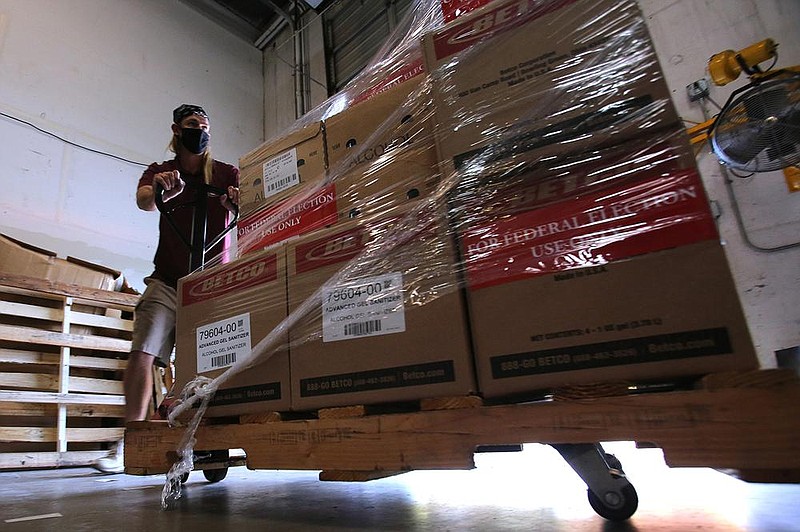 Jacob McCray loads a pallet of personal protective equipment last week at the secretary of state warehouse in Little Rock. The equipment, which will be used in the Nov. 3 election, was headed for Yell and Logan counties. More photos at arkansasonline. com/824election/. (Arkansas Democrat-Gazette/Thomas Metthe)

Despite the spread of covid-19, Arkansas will be ready on Election Day, Secretary of State John Thurston said.

In order to protect voters during the pandemic, the secretary of state's office is distributing as much as $1 million in personal protective equipment to county clerks across the state.

Last week, several truckloads of equipment were dispatched. More are scheduled to ship out this week.

"The counties are working really hard to put things in place to make sure the polling sites are safe. They're going to have the equipment to do so," Thurston, a Republican, said in an interview last week.

Instead of using ink pens, voters will now use disposable computer styluses.

"They've been ordered, they're coming from China, they're being delivered. We hope to have them soon," Thurston said.

Each one is supposed to be emblazoned with the words, "I voted."

They cost the state roughly 10 cents each, Thurston said.

Or the voter can keep it as a souvenir.

The goal is to make voting feel safe and be safe.

"If an individual comes and has their mask on, they won't have to touch a single thing. And, of course, there'll be social distancing at polling sites as well," Thurston said.

Arkansans with fears related to covid-19 can request an absentee ballot, Thurston noted. Or they can fill out a ballot during early voting.

Voting on Nov. 3 is a third option.

"Make sure you vote," Thurston said.

"Me, personally, I'm going to show up to the poll," he said. "I don't want to trust the Postal Service or someone checking the mail with my vote."

That figure is likely to skyrocket this time, he said. 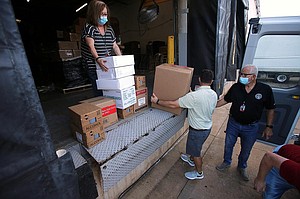 Photo by Thomas Metthe
Leslie Bellamy (from left) stacks boxes of personal protective equipment for Waylan Arnold and Ralph Burns to load into a van last week at the warehouse in Little Rock. The shipment was headed for Desha County. (Arkansas Democrat-Gazette/Thomas Metthe)

"I wouldn't be surprised if we had over one hundred [thousand] for sure, possibly 150,000 absentee ballots," he said.

It takes longer to tabulate absentee ballots than those cast electronically, so it may take a while to determine the winners in close contests, he said.

"Don't be upset if we don't know the results by the time [people] go to bed," he said. "It'll be a long night, no doubt, but it will be that way across the nation."

"In Arkansas, no, I'm not concerned about an election being rigged at all," he said.

If a person votes in one county and then tries to vote again in another county, the system will immediately know it, she said.

Elections officials are working with a U.S. Department of Homeland Security representative to protect against outside attacks, Bellamy said.

Election officials also consult with the Arkansas Division of Emergency Management, she said.

"It's been a nice collaborative effort to keep the state safe," she said.