ASK THE VET: Bread dough is a no-no for the doggos 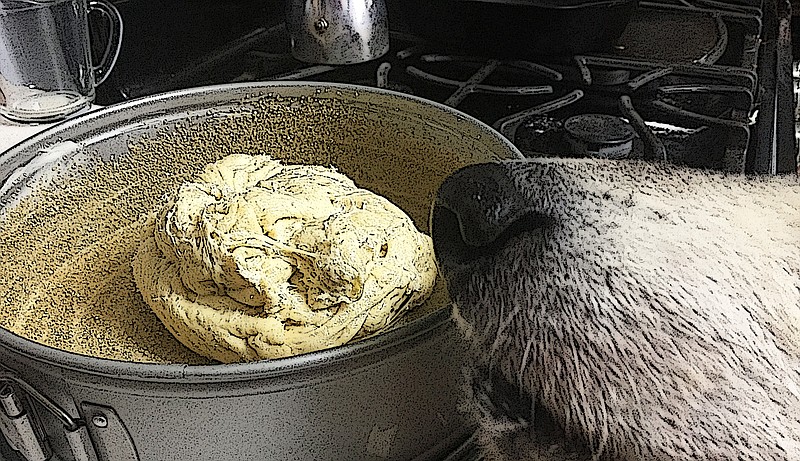 Q: I'm doing a lot of extra baking these days since the pandemic keeps me at home more. My family loves my fresh bread, but making it gave rise to a near-catastrophe involving our dog, Bandit.

When my back was turned, Bandit stole some freshly made bread dough right off the kitchen counter. I didn't realize it was a problem until he started vomiting.

To make a long story short, our veterinarian saved Bandit's life but told us that some dogs die after eating raw bread dough. Please warn your readers about this danger.

A: The raw yeast in bread dough causes two problems in dogs, each of which is potentially fatal.

First, just as it does when resting on the kitchen counter, dough rises in a dog's warm, moist stomach, expanding to many times its original size. This causes abdominal pain, retching and bloat — and, sometimes, breathing problems and stomach rupture, either of which can be fatal.

In addition, the yeast in the bread dough ferments in the stomach, releasing alcohol. So, the dog is at risk of alcohol poisoning, characterized by poor coordination and disorientation, with possible coma and death.

It's not just bread dough that causes problems. Chocolate, grapes, raisins, macadamia nuts, onions, garlic and even the artificial sweetener xylitol are all harmful to dogs.

I learned the hard way in my own home that even the most obedient dog sometimes steals food from the kitchen counter. So, if you must leave the kitchen while you're baking or cooking, move food to a spot your dog can't reach.

Q: My cats got into a fight, and one of them now seems to be in pain. I have some children's liquid Tylenol I can give him. What is the dose for a healthy 10-pound cat?

A: Tylenol, known generically as acetaminophen, is highly toxic to cats because they don't metabolize it the way humans do. In cats, acetaminophen causes red blood cell destruction, liver failure and death.

Instead of giving your cat human medication, take him to his veterinarian. He may be suffering from a painful bite-induced abscess hidden beneath the skin.

Many human drugs besides acetaminophen are toxic to pets. The Animal Poison Control Center of the American Society for the Prevention of Cruelty to Animals, or APCC, reports that in 2019, over-the-counter medications ingested by pets were the number one reason people called for help. Acetaminophen, ibuprofen and other over-the-counter human medications generated 19.7% of APCC's calls.

Next, at 17.2% of calls, were human prescription drugs. At the top of this list were medications for heart disease, attention-deficit/hyperactivity disorder, thyroid conditions and depression.

It's not just human drugs that poison pets. Overdoses of veterinary drugs, especially flavored medications, were responsible for 9.3% of the calls to APCC.

Keep all human and veterinary medications secured so your curious cats can't get to them. Tighten lids and store medications in their original childproof containers in a secure cabinet or drawer. If you carry acetaminophen or other medications in your purse or backpack, be sure to put them where your cats can't explore and find them.