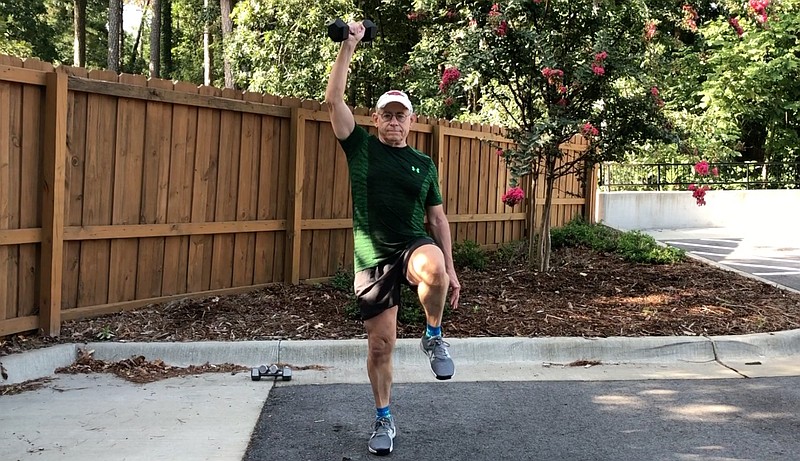 Biomechanics is the study of the mechanical laws relating to the movement or structure of living organisms. Within the study of biomechanics, there are three Laws of Motion.

This week, I'll focus specifically on the Law of Reaction to demonstrate the importance of balance and flexibility. In addition, I will present a cool new exercise that allows one to build bilateral balance.

Ground reaction force occurs during walking, running, jumping and any other kind of movement that includes force application against the ground.

The Law of Reaction also applies to joint movements. As one flexes the bicep, the tricep group is extended. The reverse is also true.

The point is, no movement occurs in a vacuum. Every movement we initiate also initiates opposing movements to counterbalance it.

Therefore, it's important to place equal emphasis on opposing muscle groups for every major joint. Even if the primary goal is to build strength in a given area (such as the quadriceps), my recommendation is to also challenge the opposing group (hamstrings) equally.

This practice will protect joints from developing imbalance, reducing the number of muscle strains.

You can provide that level emphasis by countering one exercise with another. For instance, you can do pulling movements that engage muscle groups on the back of the body after you do pushing motions (like pushups), which engage the front. But some of my favorite exercises include a "built-in" balance mechanism that helps to avoid overdeveloping one muscle group, particularly in relation to the core muscles.

The Quadruped Raise is a great example of this concept at work, and it's an easy exercise that is appropriate for almost all fitness levels.

1. Select a dumbbell. Hold it in your right hand and stand with your feet shoulder-width apart. Position the dumbbell even with the right shoulder. This is your starting position.

2. Simultaneously press the dumbbell overhead while lifting the left knee up. The knee should reach 90 degrees just as the arm reaches full extension.

3. Lower the dumbbell and your knee and then repeat for 12 reps.

4. Switch the dumbbell to the left hand and repeat.

Raising the opposite knee during the shoulder raise requires core muscles to engage, which oppose the back contractions that must occur to press the dumbbell overhead.

It's a great way to keep the back/core muscular engagement matched up, which works as a protective mechanism against injury during the exercise — but also as a long-term biomechanical stabilizer. It's a win-win!