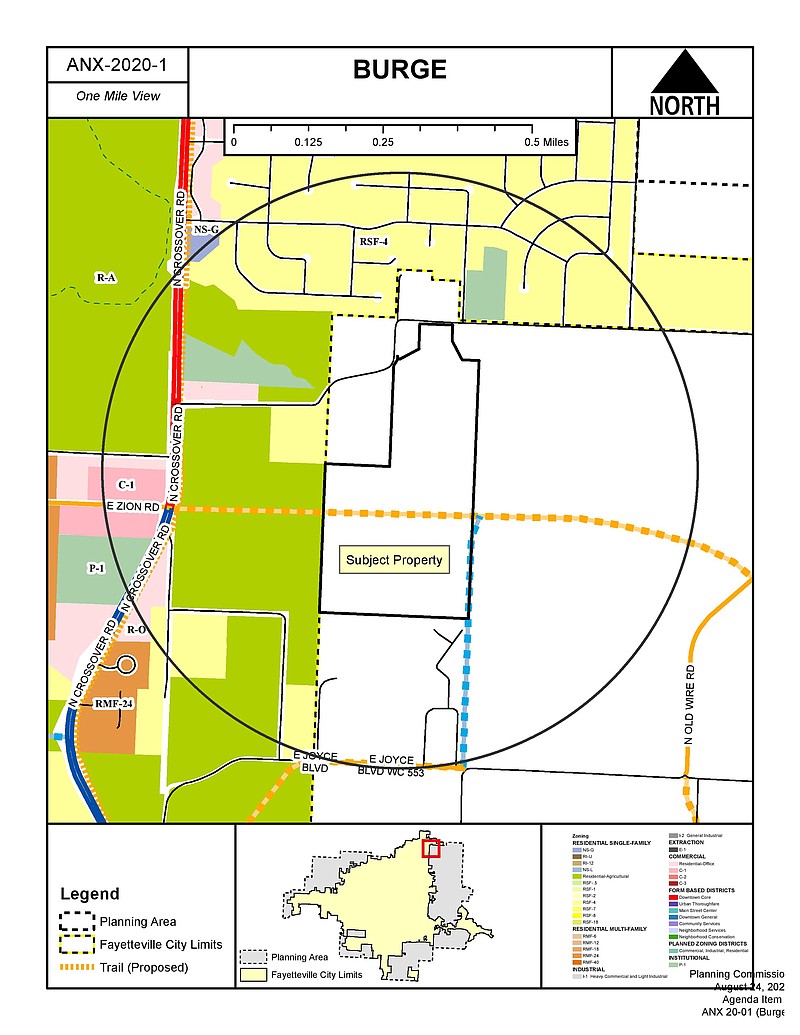 FAYETTEVILLE -- The Planning Commission indefinitely put on hold an annexation request for about 60 acres at the northeast edge of town, with members saying they wanted to know more about what the city would get.

The land sits south of Zion Road, east of Crossover Road, and has long been used as a family farm. Hilton Creek runs east-west through the property, and the area around the creek is a floodplain. The western edge of the property abuts the city.

Attorney Will Kellstrom presented the item to the commission and said there are no finalized development plans. Before the meeting began, Kellstrom requested a separate item to rezone the land be tabled indefinitely.

Water service is already available in the area, and a developer would build the sewer service up to city code, Kellstrom said. Annexing the land would subject it to city regulations, including the streamside protection ordinance, which would help preserve the creek, he said.

"If you look at the guiding principles for annexation in City Plan 2040, this is essentially the type of land you guys are looking for," Kellstrom said.

Seven residents addressed the commission during the meeting, which was held online via Zoom. Most of the residents live near the property and expressed opposition to the potential development annexation would bring. Neighbors spoke of frequent flooding in the area, as well as an inadequate bridge that would serve as an access point to the land and couldn't handle an influx of residents. Many expressed concern over not knowing the details of what is planned.

Kari Griggs said she's experienced flooding nearly every year of her 22 years living in the area. Hilton Creek is shallow and narrow, and every time more development pops up, the flooding gets worse, she said.

In 2017, the Griggs had to rebuild their home from significant flooding, and are still recovering, Kari Griggs said. The land sitting between the city and Washington County has created a headache of jurisdictional issues, she said.

"I just want to make sure that somebody is looking at how this water is going to move through this creek, and assure me it gets from Copper Creek down to Lake Fayetteville without taking our property with it," Griggs said.

Commissioner Matt Hoffman said the city's process reviewing annexation requests is backward. Rather than deciding to accept a piece of land, approving a rezoning request and then reviewing a development proposal, the opposite should happen, he said.

Hoffman suggested the annexation be submitted with a planned zoning district, which is a far more detailed request than a standard rezoning.

"I think there's probably a way to do this site sustainably with a great compact, complete and connected neighborhood," he said. "I look forward to partnering with the applicant on that as a commission and working through those details in a public setting, where the neighbors have an opportunity also to weigh in."

In other business, the commission voted 7-1 in favor of rezoning about 2 acres at the northeast corner of Mount Comfort and Rupple roads. Kum & Go made the request. Several residents spoke in opposition.

Commissioners acknowledged resident concerns but said the commercial zoning type was appropriate for the area. The City Council will have final say on the rezoning. Any requests for variances to code to build the gas station also would have to go through the commission.