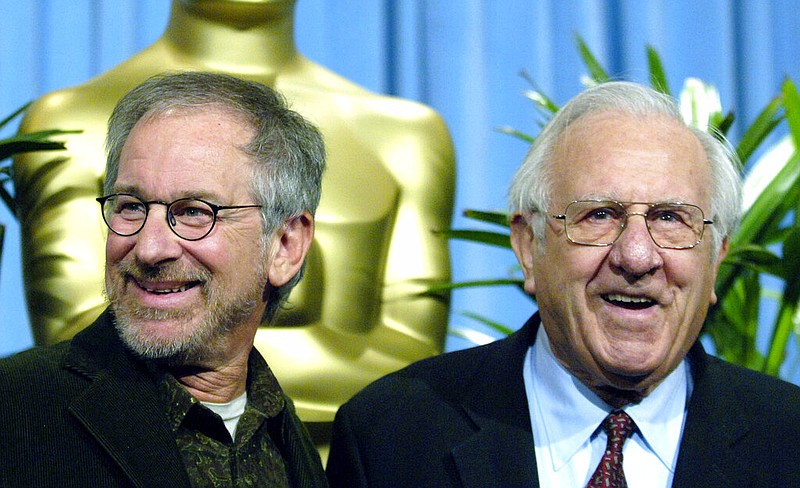 Steven Spielberg (left) arrives with his father, Arnold, for a luncheon in Beverly Hills, Calif., in this Feb. 13, 2006, file photo. Arnold Spielberg, a pioneering computer engineer, has died. A family statement says he died Tuesday, Aug. 25, 2020, in Los Angeles at 103. (AP / Chris Pizzello )

Spielberg died of natural causes while surrounded by his family in Los Angeles on Tuesday, according to a statement from his four children.

Spielberg and Charles Propster designed the GE-225 mainframe computer in the late 1950s while working for General Electric. The machine allowed computer scientists at Dartmouth College to develop the programming language BASIC, which would be essential the rise of personal computers in the 1970s and ’80s.

“Dad explained how his computer was expected to perform, but the language of computer science in those days was like Greek to me,” Steven Spielberg told the General Electric publication GE Reports. “It all seemed very exciting, but it was very much out of my reach.”

Later on he understood.

“When I see a PlayStation, when I look at a cell phone — from the smallest calculator to an iPad — I look at my dad and I say, ‘My dad and a team of geniuses started that,’” Spielberg said in the family statement.

Arnold Spielberg said of his son in a 2016 interview with GE Reports that “I tried to get him interested in engineering, but his heart was in movies. At first I was disappointed, but then I saw how good he was in moviemaking.”

Arnold helped Steven produce his first full-fledged movie, “Firelight,” made in 1963 when the budding director was 16.

“The story was a forerunner to Steven’s ‘Close Encounters of the Third Kind,’ with aliens landing on Earth, and I built the special effects,” Spielberg told the Jewish Journal in 2012. “But while Steven would ask for my advice, the ideas were always his own.”

The son of Ukrainian Jewish immigrants, Arnold Spielberg was born in Cincinnati in 1917. He was obsessed with gadgetry from the start, building his own crystal radio at age 9 and a ham radio at 15, developing skills he would use during World War II as a radio operator and chief communications man for the 490th Bomb Squadron, also known as the “Burma Bridge Busters.”

His experiences during the war were part of the inspiration for his son’s 1998 film “Saving Private Ryan.”

Arnold Spielberg graduated from the University of Cincinnati and went to work in computer research for RCA, where he helped develop the first point-of-sale computerized cash register, before moving on to GE.

Late in life he worked on the archiving technology used by the USC Shoah Foundation, an organization founded by his son to preserve personal histories of the holocaust.

All four children were with his first wife, Leah Spielberg Adler, who died in 2017. The two had divorced in 1965, and the issues the split brought up for Steven Spielberg were explored in his 1982 film, “E.T.”