Group calls for change in Conway 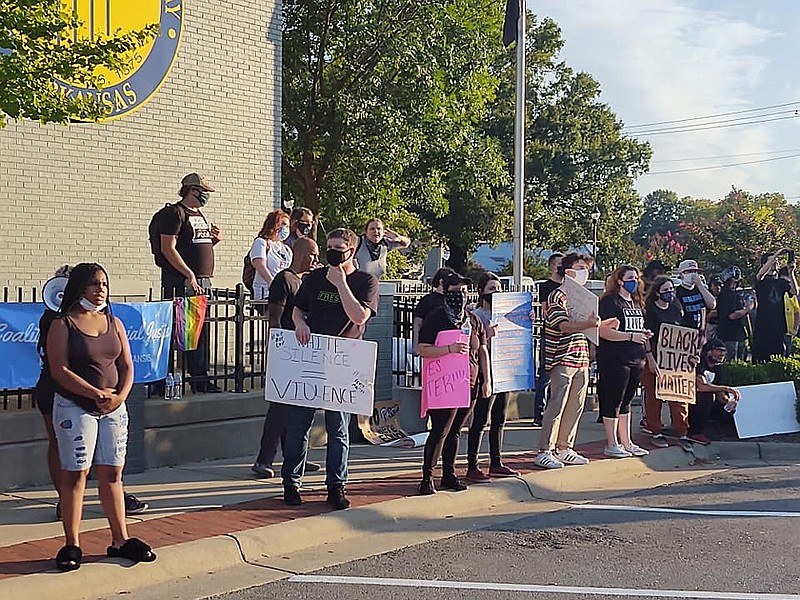 A group of protesters in Conway.

CONWAY -- The Police Department released little information Tuesday about its completed internal investigation into the death in February of a Black man who was being arrested after a shoplifting accusation.

Meanwhile, a group denied its request to address the City Council on Tuesday night about race relations protested outside City Hall. A group of armed people also stood in the area, some of its members claiming they were ready to defend the city should the first group start to riot.

Lionel Morris, 39, of Conway died Feb. 4 after a stun gun was used on him numerous times as he ran from and struggled with officers. He was suspected of shoplifting at the Harps Food Store at 1120 E. German Lane.

In late July, the 20th Judicial Circuit's prosecutor determined there was no evidence of criminal wrongdoing by police officers in Morris' death, which was investigated by the Arkansas State Police.

At that point, Police Chief William Tapley initiated a professional standards investigation into the matter. Mayor Bart Castleberry announced he asked the officers involved be placed on paid administrative leave while the internal investigation was done.

"The Conway Police Department is continually striving to find ways to better serve our community," Tapley said Tuesday. "After reviewing the incident, we have begun the process of implementing new practices and procedures that we believe will result in strengthening the relationships and trust between the department and those we serve."

"At this time the department has addressed any personnel and policy issues discovered during the investigation. Specifics or records regarding or relating to the investigation and any resulting personnel action are deemed closed and per Arkansas law, not subject to public disclosure," the statement said.

"I say, 'Lionel,' you say?" Yaminah Cummins, screamed into the megaphone.

"Morris," the crowd responded, throwing their fists in the air.

"When I say George, you say?" Cummins yelled.

"Floyd," the crowd roared back.

In May, George Floyd, a Black man, died in Minneapolis while being pinned down under the knee of a white police officer. The incident sparked protests and riots across the country.

Across the street from City Hall, nearly two dozen counterprotesters, most dressed in camouflage and gripping rifles, lined the sidewalk. One man played loud music from his pickup with a megaphone held to the speaker.

When approached by a reporter, the man screamed, "Don't come near me!"

A man others pointed to as the leader of the group wouldn't give his name because he "has family to protect" but said they were there to "back the blue."

"We're exercising our Second Amendment rights," he said, gripping his rifle tighter. "We're going to stay peaceful. Everybody's got a right to protest. Most of us are ex-military or police. We're here to back the police if they need our help."

The man said there were "30 or 40" more Arkansas Patriots stationed on the outskirts of town and the group was ready if the Black Lives Matter group began rioting or destroying property.

"We're not going to have another Wisconsin here," he said, referring to the protests and destruction in Kenosha, Wis., after the shooting this week of Jacob Blake by a police officer. Blake was injured.

Many of the Black Lives Matter protesters in Conway were also members of the grassroots group "Reinvest In Conway." Cummings said the group's request made last week to be placed on the City Council agenda for Tuesday's meeting had been denied with "no explanation."

The group presented a proposal to the city, she said, with the most urgent demand being a request to hold a town hall meeting to discuss solutions to Conway's racial issues.

On Tuesday, Castleberry said one of the group's demands was to defund the Police Department. He said the group protesting Tuesday previously met with him, the city attorney and "multiple members of the City Council."

"They have an open invitation to come by the city attorney's office at any time. They have been heard," Castleberry said. "As I have already stated, I will not defund the Conway Police Department."

"Any policy changes concerning the Conway Police Department should be brought to the City Council by the chief of police if he desires," Castleberry said.

In late July, Castleberry ordered the release of all video and audio footage of Morris' death and the release of dozens of investigative files of the incident. The mayor also invited several community leaders to view the video and offer feedback.

"We've met with multiple community organizations and groups on several occasions," Castleberry said Tuesday. "We've had Zoom [videoconference] calls and conducted in-person meetings. We will continue to listen to the community and hear their concerns."

Woodruff, the police spokeswoman, said nobody was available to answer questions about any personnel actions taken, which policy issues were changed and which new practices and procedures were implemented.

"This morning Chief Tapley advised me that he had concluded the internal review regarding Lionel Morris," Castleberry said. "I stand with Chief Tapley and fully support him and the men and women of the Conway Police Department."

A state Crime Laboratory report dated Feb. 6 and obtained through a Freedom of Information Act request stated the cause of Morris' death was "methamphetamine intoxication with exertion, struggle, restraint and conducted electrical weapon deployment."

In a redacted video of the event, released last month by the Police Department, two officers -- Hannah Fleming and Joshua Kear -- can be seen approaching Morris and a woman in an aisle of the store.

The store's manager had shown the officers an empty box previously containing a drone. When they approached Morris and the woman, Brandy Arnold, officers saw an unboxed drone and a box of half-eaten catfish strips in their cart, according to arrest reports.

Morris told the officers they intended to pay for the drone, and took it out of the box only because the box was damaged.

Arnold was handcuffed without incident, but Morris bolted and a chase ensued through the store.

A stun gun was used on Morris several times during the chase. Morris can be seen at one point placing Kear in a chokehold and grabbing for a knife on the officer's pocket. The officer threw the knife away from where they were.

Other officers arrived and subdued Morris.

In the video, Morris yells, "I can't breathe," to which an officer replies, "If you can talk, you can breathe. Chill out."

Morris repeatedly says he can't breathe, as the officer stands with a foot on Morris' back.

Tapley said the video shows Morris was placed "in the recovery position," and treatment began for injuries he had received.

The incident lasted about 6½ minutes before Morris died.