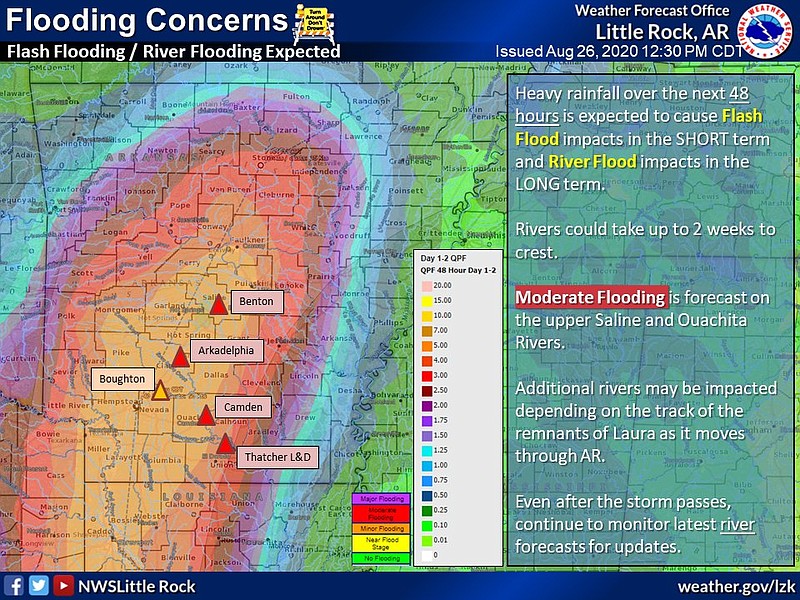 Outer bands of Hurricane Laura could cause rain Wednesday afternoon and night in Arkansas, but forecasters said the greatest effects from the storm — flash flooding, strong winds and possibly tornadoes — aren’t expected until Thursday.

Gov. Asa Hutchinson has declared an emergency ahead of the storm’s arrival, he announced at his afternoon news conference, and the state has begun preparations to respond to storm damage.

Hurricane Laura is expected to make landfall near the Texas/Louisiana coast Wednesday night or early Thursday as a major hurricane, according to a briefing from the National Weather Service office in North Little Rock.

Though rain is possible starting tonight in Arkansas, the storm center isn’t expected to enter the state until Thursday afternoon into early Friday morning.

Rain totals through Friday, when the storm is expected to have left the state, are forecast to be 6-8 inches for an area encompassing Hot Springs and Little Rock and 4-6 inches for a donut-shaped region around that area stretching from Texarkana to Pine Bluff to Russellville to Hardy. The rest of the state is expected to see less rain, between 1-4 inches.

Flash flooding is possible across the state, according to the weather service.

Forecasters said tornadoes are also possible with the storm, but they are likely to behave a little differently than the tornadoes associated with strong thunderstorms that Arkansas usually sees.

Tornadoes associated with the hurricane are anticipated to be weaker and shorter-lived, but also expected to cause more intense damage in localized areas.

The time of greatest threat for tornadoes is forecast to be Thursday evening into Friday, according to the briefing.

The weather service advised Arkansans to remain weather-aware over the next few days, especially because any deviation in the storm’s path from what forecasters expect could significantly alter the forecast.

Gov. Asa Hutchinson said Wednesday he has approved $250,000 in emergency funds to prepare for the hurricane’s effects in-state.

He said search and rescue teams are on standby, but director of the Arkansas Division of Emergency Management A.J. Gary said there is a chance winds will be too strong for teams to deploy.

The state’s emergency operation center, already active due to the coronavirus emergency, has increased its personnel to respond to the storm, Gary said.

He and the governor urged Arkansans to pay attention to the weather, and to be careful if they encounter downed power lines or trees, as well as not drive through water across a roadway.

Entergy Arkansas, which provides power to thousands in the state, said in a news release it has 1,200 employees on standby to assist with power restoration. Crews will focus on restoring emergency services first, according to the release, then will prioritize restoration based on what repairs will bring power to the greatest number of customers.

Outage maps can be viewed online.