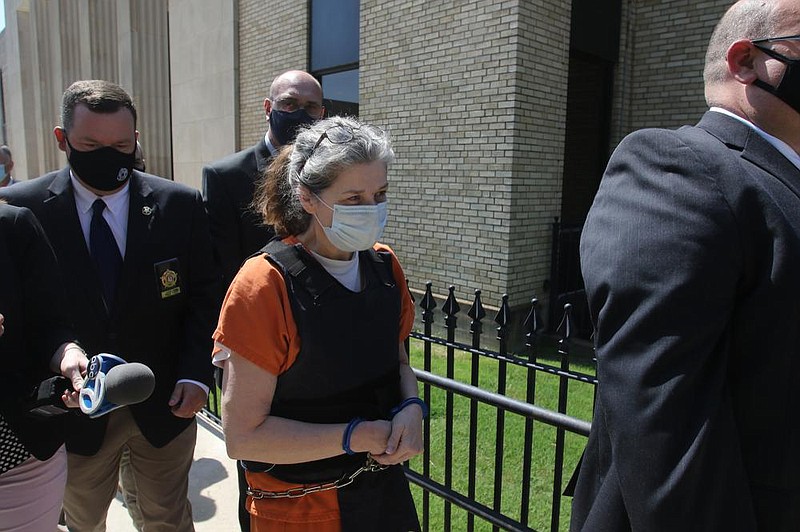 Rebecca O'Donnell is led out of the Randolph County Courthouse after pleading guilty to the murder of former state senator Linda Collins on Thursday, Aug. 6, 2020, in Pocahontas. (Arkansas Democrat-Gazette/Thomas Metthe)

The children and ex-husband of slain former state Sen. Linda Collins filed a lawsuit Monday seeking to halt the release of an archive of records from the investigation into the lawmaker's death.

The investigation ended earlier this month with a guilty plea by Collins' close friend Rebecca O'Donnell.

According to a copy of the lawsuit filed with the Pulaski County Circuit Court, Collins' family members fear that their own personal, sensitive information was swept up in investigators' efforts to build a digital footprint of the days surrounding Collins' death last summer, and that it now risks being exposed to the public.

The lawsuit was filed nearly three weeks after O'Donnell admitted to killing Collins. The admission was part of a plea deal that came with a 50-year prison sentence.

Since the plea agreement was reached Aug. 6, at least 10 public-records requests from media outlets have been sent to the Arkansas State Police and the Randolph County sheriff's office seeking the release of the investigative files, according to a copy of the family's complaint. Both agencies were named as defendants in the lawsuit.

The Arkansas Democrat-Gazette sent records requests to both agencies earlier this month, but it had received only a portion of the state police investigation files as of Tuesday.

Collins' body was found by her son, Butch Smith, at her home in Pocahontas on June 4, 2019. She had been stabbed to death, wrapped in a blanket and covered by a tarp, according to portions of the investigative record that have been made public.

State police later gained access to footage from a security system installed inside Collins' home, which showed O'Donnell, her friend and campaign aide, attempting to stash a kitchen knife into her purse with bloody hands, according to records made public over the weekend.

Other documents released over the weekend show that police also gained access to both Collins' and O'Donnell's phone records and Facebook accounts in an attempt to track their whereabouts and view messages between the two friends. In the lawsuit, Butch Smith and his sister, Heather Tate Williams, said they voluntarily turned their own phones over to state police to help with the investigation.

Phillip Smith, Collins' ex-husband, was not asked to turn over his phone, but state investigators do have his personal laptop in their possession, according to the lawsuit.

The lawsuit states that while the children and ex-husband have been unable to review the full investigative files, they fear that information -- including personal text messages, photographs, medical information and "intimate messages" between Collins' children and their spouses -- that is irrelevant to the criminal investigation but nonetheless gathered by police risks being made public by a "document dump."

The family "voluntarily handed over their personal devices to [police] in an effort to aid the investigation and had no reason to suspect that a day would come where their personal matters would be displayed for the public's scrutiny," the suit said.

Tess Stewart, an attorney for the family, declined to comment on the lawsuit Tuesday.

The complaint asks the court to halt the release of the investigative files until an "in-depth review" can be conducted to determine what information is subject to disclosure and what information should be kept private.

The case has been assigned to Pulaski County Circuit Judge Cathleen Compton, who has yet to rule on the request for a preliminary injunction.

A spokeswoman for the Arkansas State Police said Tuesday that the agency is still preparing its lengthy investigative file for release with necessary redactions. Randolph County Sheriff Kevin Bell sent a reporter an email on Tuesday, saying that he was holding off on releasing the county's records until the lawsuit is resolved.

CORRECTION: Heather Tate Williams is the daughter of slain former state Sen. Linda Collins. An earlier version of this story had an incorrect last name for Williams.