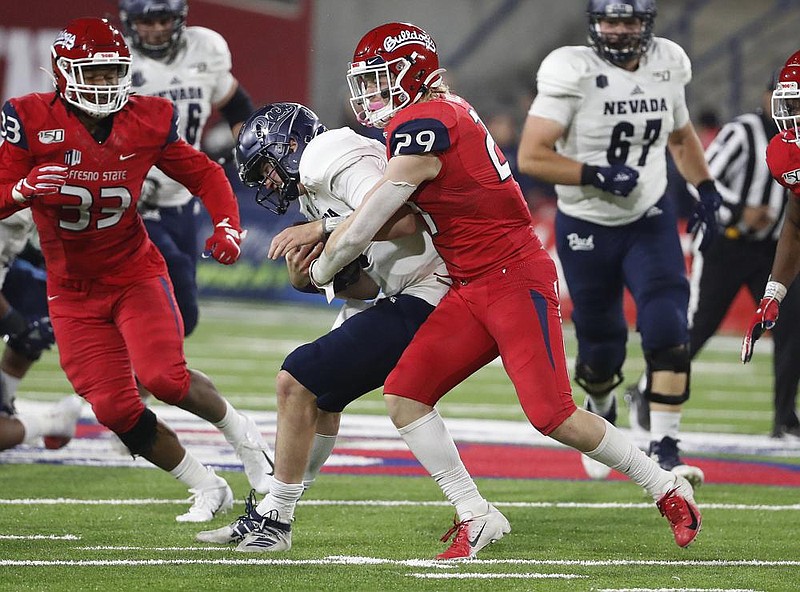 Justin Rice was in Albuquerque, N.M., when he received a call from SMU Coach Sonny Dykes and defensive coordinator Kevin Kane.

Rice, a standout linebacker from Fresno State, was on his way to Jonesboro to play for Arkansas State University. Dykes and Kane were hoping to change his mind.

The brief conversation kept Rice heading east, keeping the promise he made to Arkansas State. A day later, the Modesto, Calif., native found himself in Jonesboro joining his new teammates two weeks before their season opener.

For Rice, the 2020 season might be the most important of his career. Picked as the preseason Mountain West Conference defensive player of the year, he's expected to be selected in the 2021 NFL Draft. But after the Mountain West announced its decision Aug. 10 to postpone fall sports, Rice put his name in the transfer portal Aug. 14.

Rice has received attention from dozens of schools, including multiple Big 12 programs, according to his dad. But Arkansas State offered two things that most other schools couldn't -- a scholarship and the likelihood of immediate playing time.

"Agents have told us he needs to play, and he needs to show that he's making progress while he's playing. So when the Mountain West shut down, we're like, 'OK, now what do we do?' " Jeff Rice said. "Teams that are playing this fall are hot and heavy in fall camp. And every day that went by was going to put him in a worse spot to kind of be prepared for a season. So we kind of did two years of high school recruitment in a three-day period. And he made the decision about 24 hours before hitting the road down there."

One of the first coaches to reach out to Rice was ASU defensive coordinator David Duggan, who knew his unit -- which finished 124th in total defense last year -- could use Rice. The Red Wolves are thin at linebacker alongside senior Caleb Bonner.

So far, Rice has fit right in.

"It's an older player, a more mature player that's played at a very high level. He's got a very high football IQ, so he's picking up the game very quickly in our meetings," said Duggan, in his second year as ASU defensive coordinator. "Shoot, we put all of our base defense in a day and a half, and he seemed very comfortable and asked great questions."

"I've been coaching 36 years, and he's as good a football player as I've ever coached. I've coached some pretty good football players, but he had the 'it,' " said Roger Canepa, Rice's high school coach. "He's a kid that makes stuff happen. He's always had a knack for making big plays. He's the guy who you go to when you need to make a play.

"I'd think he'll jump right in and help that defense. I don't know what they run, but I know he's a playmaker."

Rice followed in his brother's footsteps and went to Fresno State to play running back. Despite breaking his foot in the first week of fall camp of his freshman year, he played in six games mostly on special teams. After a coaching change, he was asked to move to the other side of the ball.

The transition took time, but after redshirting his junior year, he had his breakout season in 2019. He started all 12 games for the Bulldogs, leading the team with 112 tackles and forcing four fumbles, which was tied for fourth in the NCAA. He also scored a touchdown on an 18-yard scoop-and-score against UNLV.

"As a player, he's just so instinctual," said Jared, who played alongside Rice for four years at Fresno State. "He just makes things happen. He has knack for getting the ball. And as a person, he's a pretty outgoing guy and has always been well-liked among his teammates. I think they got a real good one down there."

Coach Blake Anderson said the Red Wolves realize they're lucky to have him, saying "we just felt like it was something we couldn't pass on."

It's easy to see what Arkansas State is getting from Rice when looking at stats, but his father said his impact goes beyond a box score.

"His junior year in high school, he played the state championship game on a partially torn meniscus. And come hell or high water, he wasn't going to give up that. He grimaced and went out there and played," Jeff Rice said. "He's going to be kicking and screaming -- he wants to be on the field. And that's probably his biggest compliment is he's a tough kid, and he's going to do anything he can to help the team."

In less than two weeks, Rice will don a different tint of red. He'll have new teammates and unfamiliar faces by his side for the first time since high school.

And while he could have chose somewhere else and changed his mind in Albuquerque, he's happy to be in Jonesboro.

"He may not be a country boy, but he'll be OK," Canepa said. "Football is football. And Justin knows football."