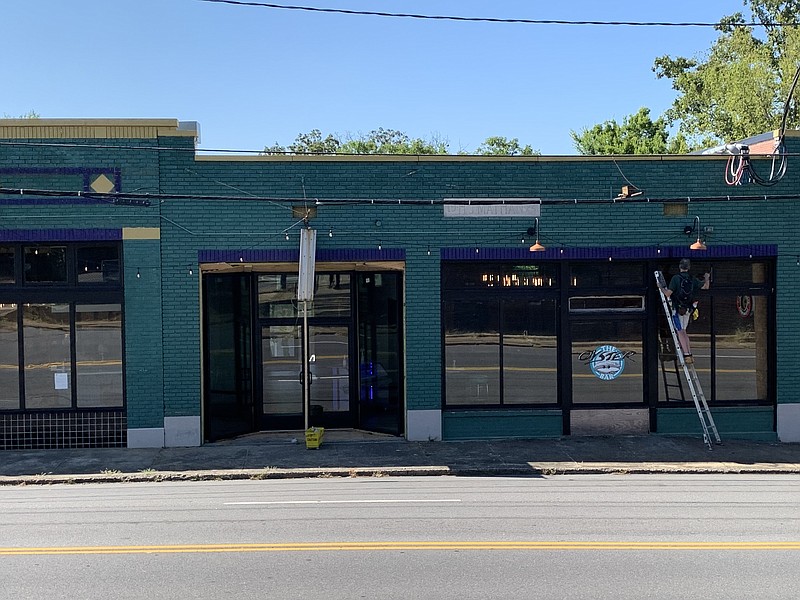 Little Rock landmark The Oyster Bar, 3003 W. Markham St., is reopening "on select dates," starting today and Saturday. "Just like a good oyster, opening up is half the battle!" was the opening line of an announcement on the restaurant's Facebook page, facebook.com/thelroysterbar.

Chris Tanner, who with his wife, Samantha, bought the venerable establishment in 2019 from retiring founder Virginia Boyd, says he expects to open two nights a week with a prix-fixe menu for customers who have made reservations, and who will be able to hold onto their tables for the entire evening if they want. Eventually, Tanner has said, he'll consider making takeout meals by reservation, but not on his opening weekend. "Next week we'll change it up," he says. "And if the demand is there, we might open another night."

The doors will open at 5:30 and close at 10 p.m. Jim Mills Music will provide entertainment on a newly built stage, starting at 6:15. The opening weekend menu includes char-grilled Gulf oysters and house hush puppies with butter as appetizers; chicken and andouille sausage gumbo and Key West pink shrimp as main dishes; and Manchego cheese grits and mustard greens as sides. Cost, $38, does not include alcoholic beverages or gratuities. To book a table, call (501) 666-7100.

We have more details on The Hangout Grill & Bar, 10840 Maumelle Blvd., North Little Rock, most recently the home of South Boulevard (aka SoBo). The new restaurant is a partnership between Alvin Watkins, owner of The Butcher Shop; Sauce(d) co-owner Kevin Case; and Chad Jones, president of Haynie Companies, which owns Mexico Chiquito. (You will recall we reported last week that Watkins has applied for a mixed-drink license from the state Alcoholic Beverage Control Division; Jones says the establishment will have two bars.) Jones says the target opening is Sept. 14-16 if all goes well, following some soft-opening activities. The menu, which Jones describes as elevated from common bar food, will feature sliders, street tacos, burgers, sandwiches and salads plus daily plate-lunch specials and entree specials — steak one night, for example, and rotisserie chicken another; a smoker on the premises will make possible pork and rib barbecue specials, and Jones says, they'll smoke hams and turkeys for Thanksgiving and Christmas. He expects hours to be 11 a.m.-8 p.m. Sunday-Thursday, 11 a.m.-10 p.m. Friday-Saturday. A phone number is pending. 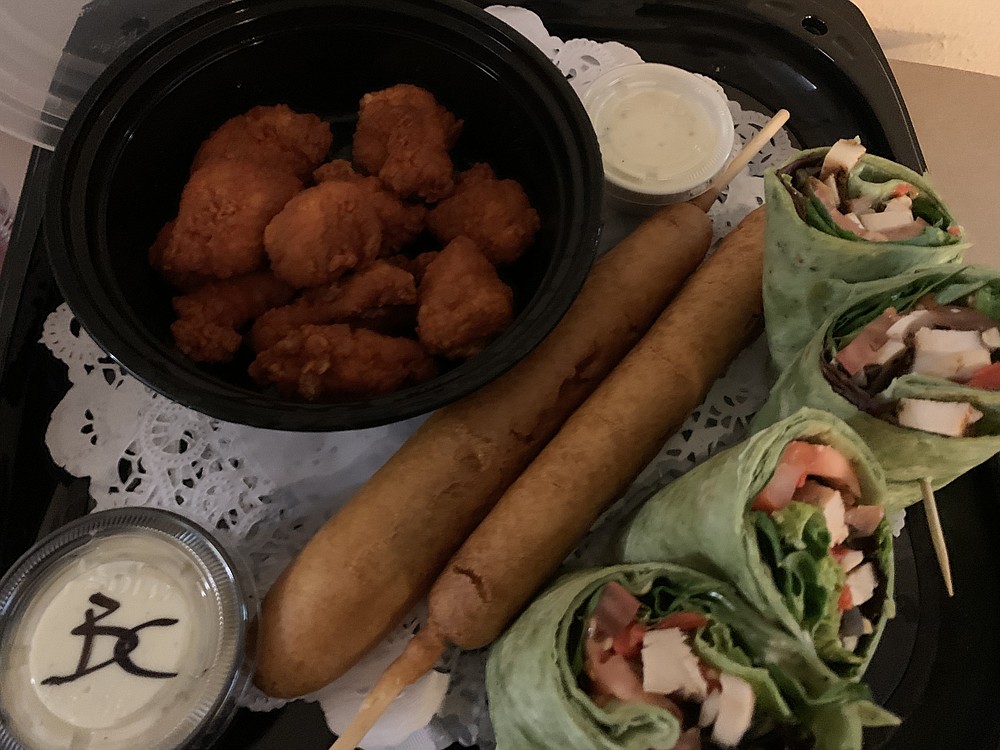 Just as this column was going to the press last week, we got word that North Little Rock's Simmons Bank Arena had added a curbside pickup option for its new "Arena Eats" offerings, which it had first announced as delivery-only, via Doordash, Bite Squad or GrubHub. It's open 11 a.m.-2 p.m. Monday-Friday; the menu includes chips and dips; "salads & such"; sandwiches and wraps; pizza — 8-inch personal and 16-inch "anti-personnel" (our term, not theirs) pies in cheese, pepperoni, meat lovers and veggie; and "Arena Classics" — including burgers, chicken tenders, pulled-pork barbecue sandwiches, boneless buffalo wings, nachos, loaded and barbecue-pulled-pork-stuffed baked potatoes, corn dogs, hot dogs and funnel cakes. Call (501) 324-2115 or visit tinyurl.com/yxe7ozls. If you're picking up lunch, drive in to the Cypress Street loading dock entrance ("underneath the marquee on the [Interstate 30] side"), veer to the right and park in one of the marked spaces and call (501) 324-2114 to let them know you've arrived.

One of our eagle-eyed readers says that in looking up "Minute Man Jacksonville" on Google, he spotted the opening date as Aug. 24 — as in Monday. And in a re-check on Monday, the Google page said "recently opened." He checked with us; we told him just what we'd reported a couple of weeks ago, that senior vice president Chris Bailey had said that, barring any further construction issues, the target is the first part of September to open the Minute Man resurrection at 140 John Harden Drive, Jacksonville (most recently Fuzzy's Taco Shop).

Our reader also checked the website, tinyurl.com/yybfnjvc, which provided no more concrete (no pun intended) target than "coming soon." And found still nothing specific on the Minute Man Memories Facebook page (tinyurl.com/y497vjxa). So he called the restaurant — (501) 983-4857. "The person (I didn't get a name but probably the owner) ... apparently he is getting a bunch of calls. He appreciates the interest but it is causing extra work." And provided our reader with that same target — "mid-September opening, like you reported." Hours will be 11 a.m.-9 p.m. Monday-Thursday, 11 a.m.-10 Friday-Saturday.

Meanwhile, it appears that somebody has gotten through to Google; we did the same search earlier this week and got "Opens Sep 14."

The restaurant will open with a new concept to protect diners and staff called SmartSpace that includes "built-in safeguards, physical barriers, social-distancing protocols and processes that go above and beyond pandemic-era expectations," according to a news release. Also installed in the HVAC system: CASPR air sterilizers, usually found in hospitals and airports, but not neighborhood restaurants, the release proclaims. And the company is providing employees with free covid-19-focused trauma insurance that also includes counseling and and wage protection.

And speaking of the 1200 block of Main Street, Little Rock's second outlet of the Alabama-based Rock N Roll Sushi franchise-chain operation has opened for pickup and delivery, going into the former Atlas Bar, 1224 Main St. Arkansas franchisees Chris Kramolis and Jason Alley opened their first location at 12800 Chenal Parkway back in the spring. Hours are 11 a.m.-8 p.m. Monday-Thursday, 11 a.m.-9 p.m. Friday-Saturday. The phone number is (501) 900-7625 (ROCK); you can order online at the website, rnrsushi.com; and the Facebook page is tinyurl.com/yy72ryy9.

In chain restaurant menu news: McDonald's is raising its spice quotient, adding Spicy Chicken McNuggets and Mighty Hot Sauce, starting Sept. 16 "for a limited time at participating restaurants nationwide." The nuggets will be in a "sizzling tempura coating made of both cayenne and chili peppers," according to a news release; the Mighty Hot Sauce combines crushed red peppers and spicy chiles. Meanwhile, for fall, Cracker Barrel Old Country Store is adding chicken pot pie to its menu and bringing back carrot cake.

And Kingsford Charcoal has been donating money to barbecue joints across the country through its Together With BBQ initiative since March, including Wright's Barbecue, 2212 Main Drive, Fayetteville (actually, apparently, in Johnson), where it has established a $5,000 tab on Friday that will allow customers to order pitmaster Jordan Wright's "Rocket Man" (a loaded mashed potato and brisket) for free, 11 a.m.-8 p.m. or until the $5,000 tab limit has been reached. The phone number is (479) 313-8618, the website is wrightsbarbecue.com and the Facebook page is tinyurl.com/y3owe63u.