PA tennis ahead of schedule 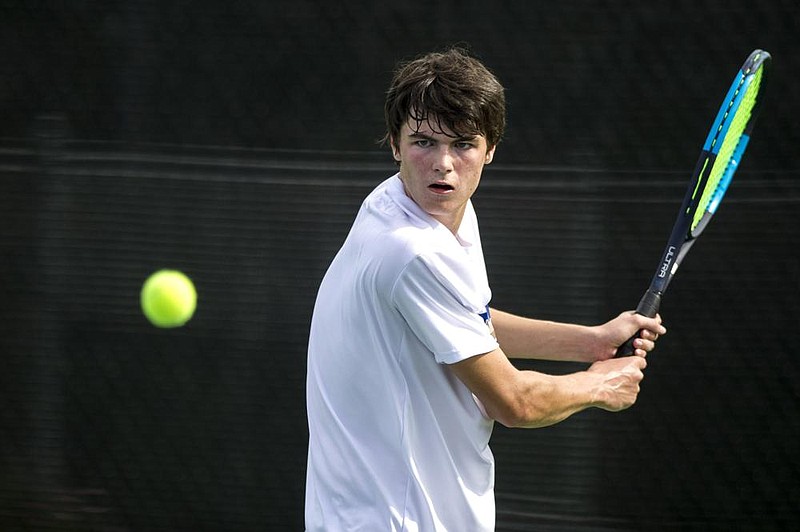 The coronavirus pandemic has caused headaches for high school teams around the state in more ways than one.

Aside from putting an end to sports seasons in the spring, covid-19 has had fall activities in flux for much of the summer, ultimately causing scheduling issues for many.

For a vast majority of teams, schedules are completed several months in advance before a season begins. Pulaski Academy Coach Bill Topich used that methodology to create a schedule for his boys and girls teams long before the pandemic caused disruptions.

"That's usually what I always try to do," Topich said. "We try to find high-caliber opponents to keep the kids sharp during the regular season. Even before Covid-19 was a factor, we were looking at Fayetteville, knowing that they always have a strong team in 6A and that we have a strong team in 4A.

"We had actually been planning that match out at the end of last season during the overall tournament. Me and [Fayetteville] Coach [Darin] Phelan were talking about getting together for it, and I'm thankful that we were able to set it up."

Golf, tennis and cross country were the first sports allowed by the Arkansas Activities Association to carry on with their fall seasons. That ruling came July 23, which gave teams enough time to not only prepare but also complete their schedules if they hadn't already done so.

However, there was no such worry for the Bruins and Lady Bruins.

"[Fayetteville] graciously traveled down here, which was nice," Topich said. "They always have a solid program and are always well coached. It's always great to be able to play up a division and see on of the better 6A teams in the state.

"But that's what we want. We want to play the best teams that we can play, especially early, because it toughens you up for the challenges that will come later."

Some programs had no choice but to alter their schedules.

The AAA allowed football teams to hold full-contact practices in early August. Since then, some players tested positive for the virus, forcing teams such as Harding Academy and Clarksville to cancel their football season openers and leave their original opponents, Bald Knob and Ozark, scrambling to find replacements.

The Lady Wildcats opened up defense of their Class 3A title by taking down the Lady Cobras 3-2 in their season opener Tuesday.

The match was a bit different than the one that was played in last year's final between the two, which Episcopal Collegiate swept 3-0. The Lady Wildcats also had won the previous three regular-season meetings prior to that.

But Fountain Lake pushed their rivals to the brink in the rematch and nearly ruined the head coaching debut for Episcopal Collegiate's Paige Gartar.

The Lady Wildcats, who return nearly their entire team from last season, dropped the first set 18-25 before winning the next two 25-19 and 25-22. The Lady Cobras rallied to nab the fourth stanza, 25-19, but ran out of steam in the deciding set and lost 15-8.

Five of last year's 10 state champions are set defend titles for the first time when the cross country season gets underway next week.

The Mountain Home and West Fork boys captured their first state championships in 2019 while Greenwood, Waldron and Quitman did the same on the girls side.

Waldron Coach Angie Bailey said things have gone good for her team, which had three runners finish among the top 18 during the individual portion of last year's state meet to help the Lady Bulldogs outdistance Jessieville.

"We started practice as soon as we were able," said Bailey, who is entering her 11th season as coach. "The kids have been running all summer. We had 6 a.m. practices and 8 p.m. practices.

"We're just hoping to be able to run meets."

A number of noteworthy volleyball matches are scheduled for today, including a pair of battles between perennial powers Bentonville, which won the Class 6A title last season and has captured six championships overall, and seven-time titlist Siloam Springs in a nonconference clash. Also, Benton, last year's Class 5A runner-up, will entertain Conway, which finished second in the 6A-Central in 2019. ... The golf match between Jonesboro, the defending Class 5A boys state golf champions, and Cabot, the 2018 Class 6A state champions, has been canceled, said Jonesboro Coach Blake Mackey. Heavy rain and wind associated with Hurricane Laura is expected to hit parts of the state today and Friday, including Northeast Arkansas.