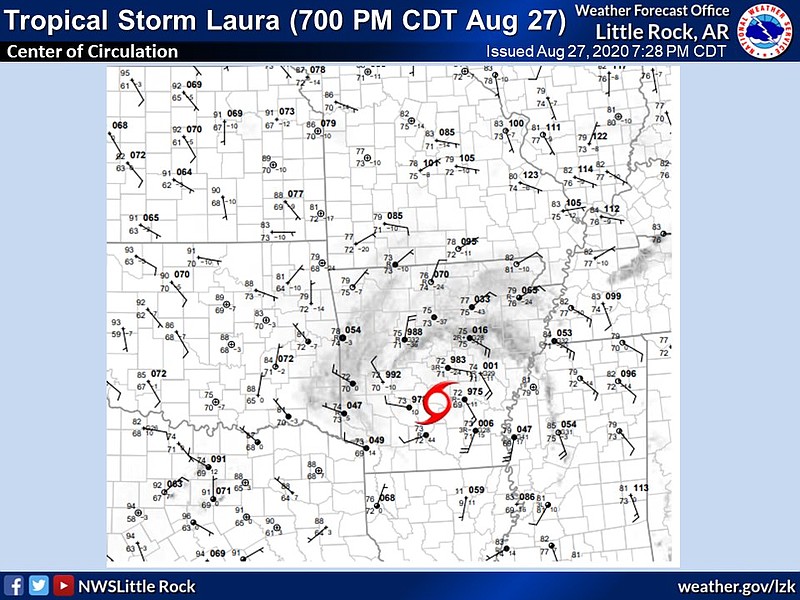 The National Weather Service issued a tornado warning for an area including Strawberry, Lynn and Smithville until 9:15 p.m.

A tornado warning also remained in effect until 9 p.m. for western Craighead County in northeast Arkansas. 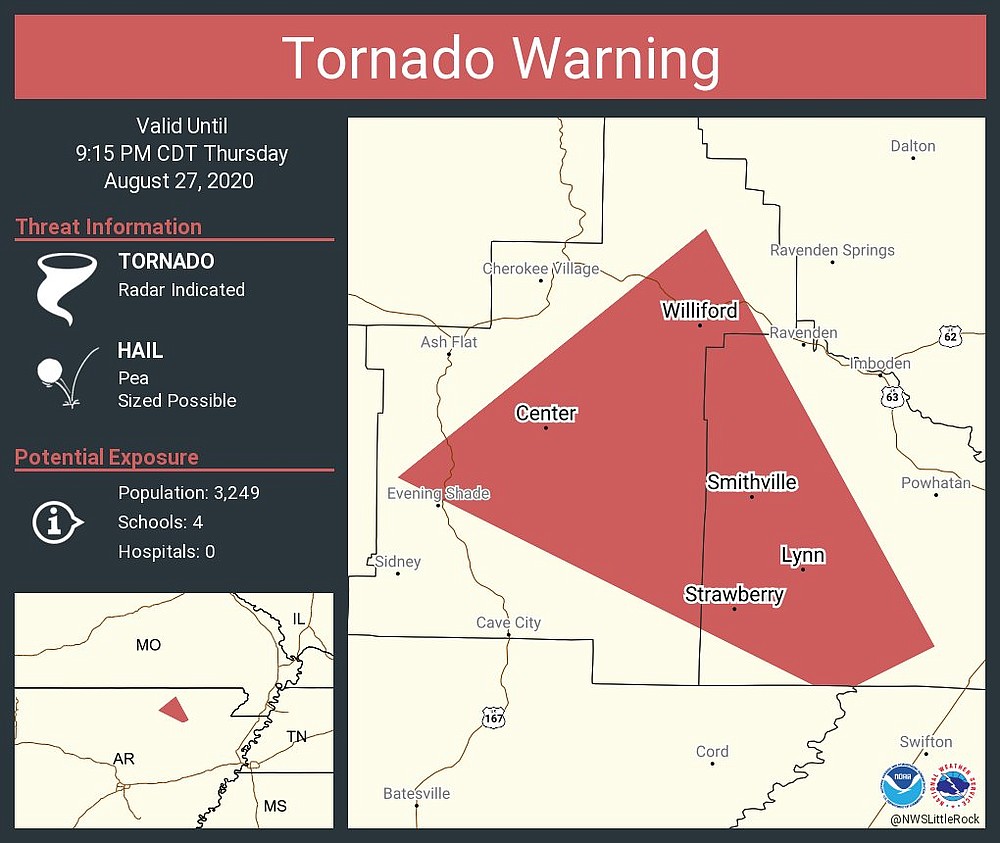 The National Weather Service issued a flash flood warning for a portion of southwest Arkansas lasting most of Thursday evening.

The warning covered areas including Mena, Booneville and Waldron, and was effective until 11:45 p.m. Thursday.

The announcement was made as tornado warnings began expiring around the state. 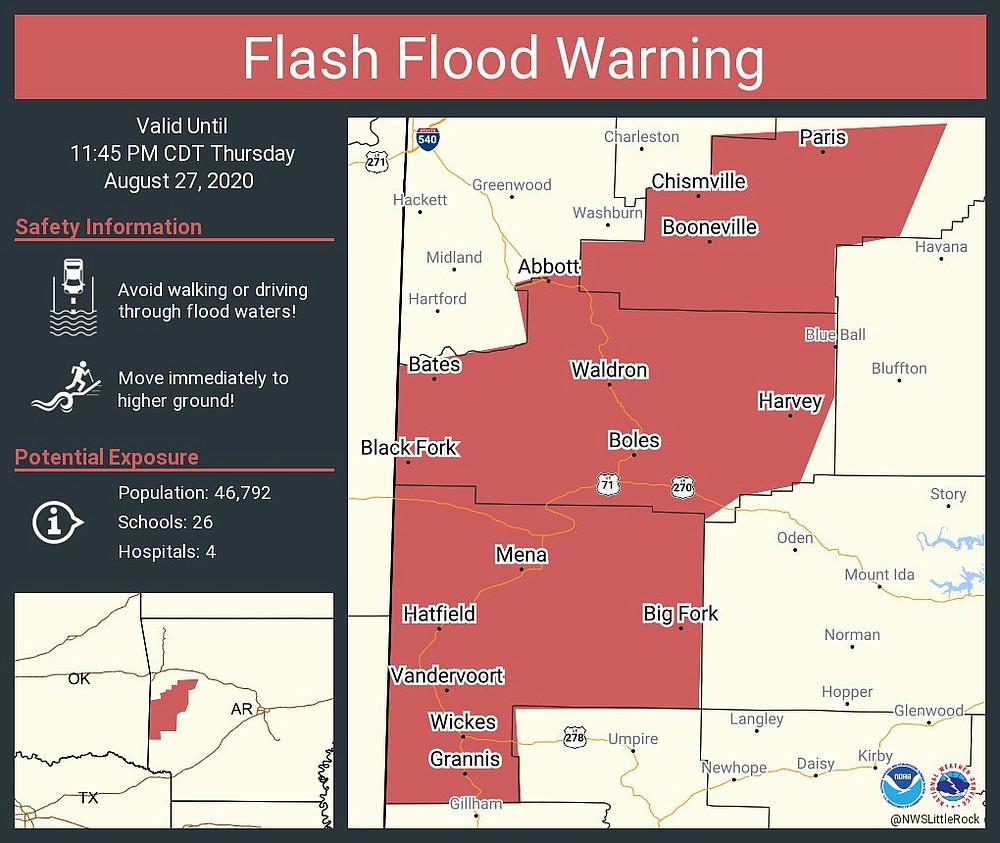 The National Weather Service issued a tornado warning for east central Independence County in north-central Arkansas, and southeastern Jackson County in eastern Arkansas, that is set to expire at 8 p.m.

The warning was inspired by a severe thunderstorm over Hickory Ridge, about 17 miles southeast of Newport and moving northwest at 35 mph. 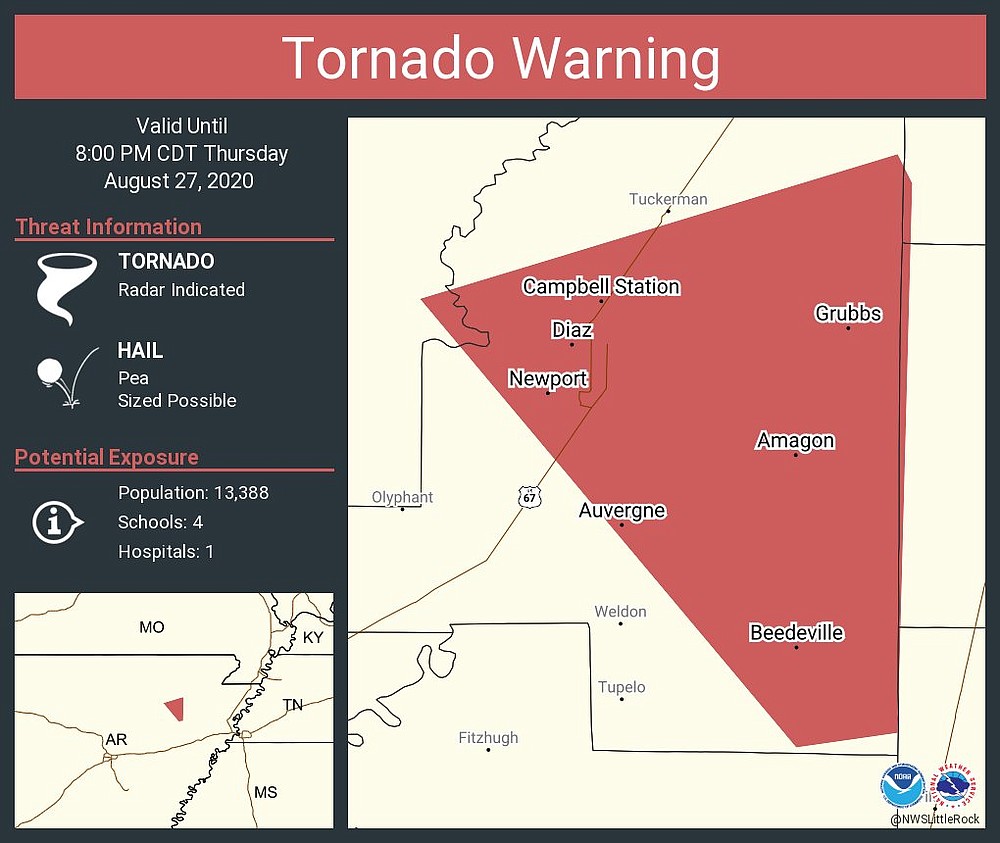 The National Weather Service issued a tornado warning for an area including Saint Charles, Snow Lake and Van that is set to expire at 5 p.m. 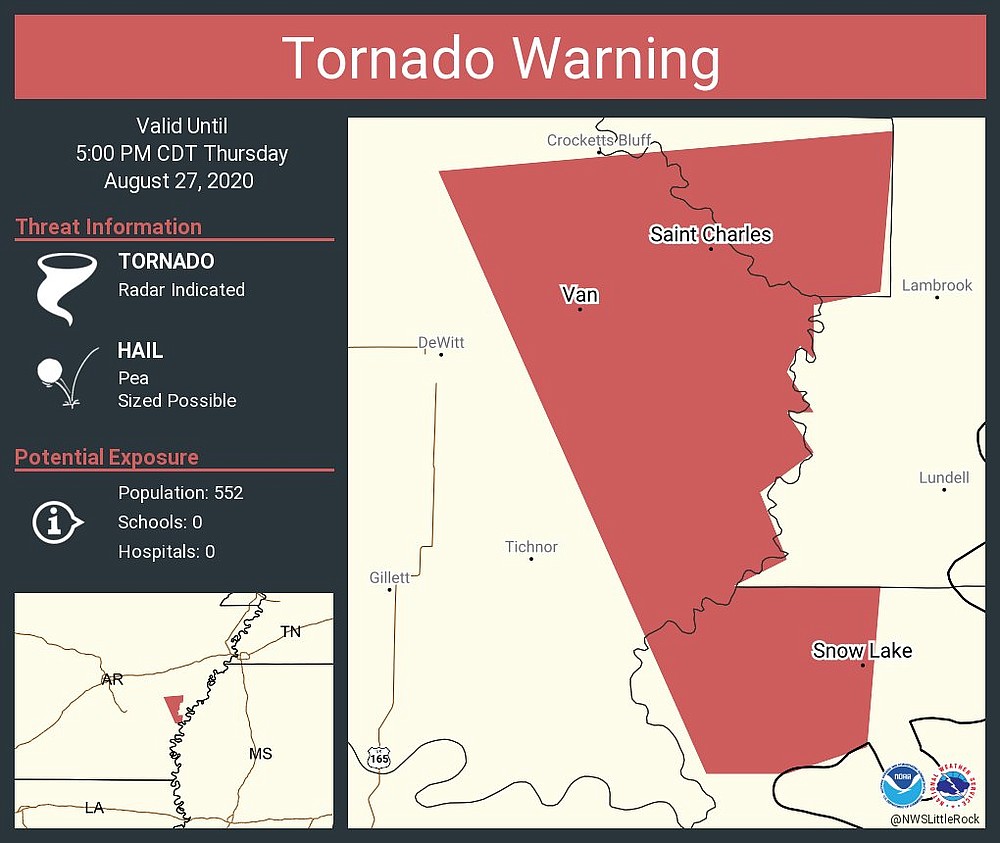 The National Weather Service issued a tornado warning Thursday afternoon for an area including Stuttgart and Almyra. It is set to expire at 4:15 p.m.

The weather service also issued a tornado warning for an area including Stuttgart, Hazen and Ulm set to expire at 4:30 p.m. 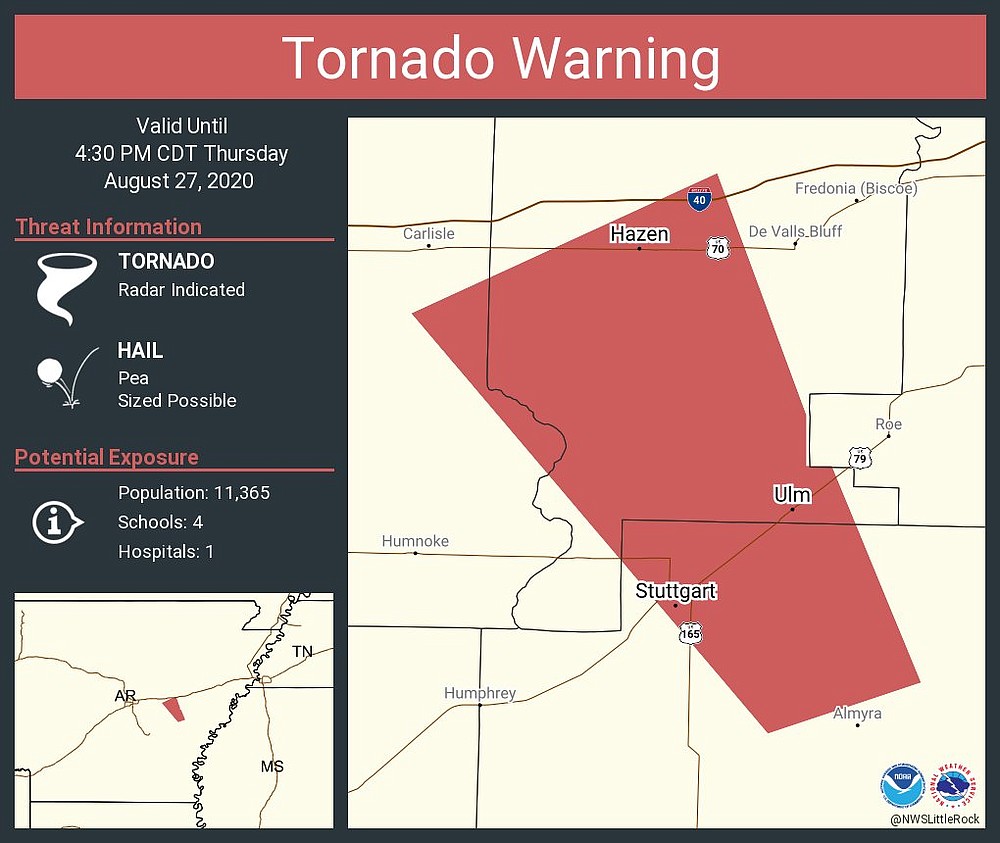 The number of Entergy Arkansas customers without power grew to more than 38,000 as of 3:45 p.m., including more than 4,000 in Pulaski County.

Entergy told customers Thursday afternoon that power outages in areas hardest hit by Laura may last days or even weeks, given the extent of damage across its service areas in Texas, Louisiana and Arkansas.

As of 2:45 p.m., more than 32,000 Entergy Arkansas customers were without power, according to an online outage map. Hundreds of thousands more Entergy customers in Texas and Louisiana were also experiencing outages.

The company said power restoration may be hindered or slowed by flooding and blocked roads as well as covid-19 precautions.

All lanes of eastbound I-30 were briefly blocked Thursday afternoon by a downed tree just east of Hope, according to an Arkansas Department of Transportation online map at 2:30 p.m.

Several other highways in southern Arkansas were also blocked by downed trees, the department said.

Additionally, Rock Region Metro announced it is suspending all transit service Thursday at 2:30 p.m. ahead of high winds that are expected to reach an unsafe level for bus operation.

Metro streetcar service has already been suspended as part of Metro’s covid-19 response.

As of noon Thursday more than 15,000 in Arkansas were already without power, according to an outage map from Entergy Arkansas.

The outages are clustered along the state’s southern border as the storm has started to move into the area. Customers in and around Magnolia and El Dorado are suffering the most power loss so far.

SWEPCO, which services far southwest and west Arkansas, reported just a few dozen outages in the state as of noon.

[SCHOOL CLOSINGS: Get the latest on school closings in Arkansas» arkansasonline.com/827tracker/]

Much of the southern half of Arkansas is under a tropical storm warning Thursday as the remnants of Hurricane Laura head for the Natural State.

The storm center is expected to cross the state in the evening and early Friday morning and bring with it heavy rain, high winds and possibly tornadoes.

Four to 6 inches of rain are forecast from southwest to Central Arkansas, according to a briefing from the National Weather Service in North Little Rock. Flash flooding is possible across that area but most likely in southwest Arkansas and could necessitate evacuations or rescues.

Rivers and tributaries could overflow their banks, while small streams and creeks could become dangerous rivers.

In mountainous areas, the weather service said, runoff could increase the chance for rock and mudslides.

The upper Saline and Ouachita rivers in particular are expected to experience moderate flooding.

The storm is also expected to bring winds up to 65 miles per hour to some parts of southwest and south central Arkansas, including El Dorado. Winds up to 50 miles per hour are widely forecast, from Texarkana to Searcy to Monticello. The area includes Little Rock.

The weather service anticipates wind damage to porches, awnings, sheds and unanchored mobile homes. Large tree limbs may be broken off and a few trees may be snapped or uprooted.

As for tornadoes, the time of greatest threat is anticipated by the weather service to be Thursday afternoon and evening.

Tornadoes are expected to be weaker and shorter-lived than tornadoes associated with super cell thunderstorms.

The weather service advised Arkansans to remain weather-aware because any deviance from the expected path of the hurricane could significantly change the forecast.

In a news release, city spokesman Lamor Williams said yard waste collection will be delayed, because crews have been reassigned to focus on picking up trash and recycling so residents can move carts from streets and sidewalks ahead of the storm.

The city will also close the gates at Boyle Park and Kanis Park, where street crossings often flood during major rainfall.

Matt Burks, the city’s emergency management administrator, advised residents to not try to walk or drive through flood water.

“People underestimate the force and power of water. Many of the deaths occur in cars swept downstream. Many of these drownings are preventable,” Burks said in the release. “A mere 6 inches of fast-moving floodwater can knock over an adult. It takes just 12 inches of rushing water to carry away most cars and just 2 feet of rushing water can carry away SUVs and trucks.”

This story was originally published at 11:18 a.m.