OPINION | TAKEOUT TASTINGS: Eating at home can be just as good as traveling to distant culinary shores 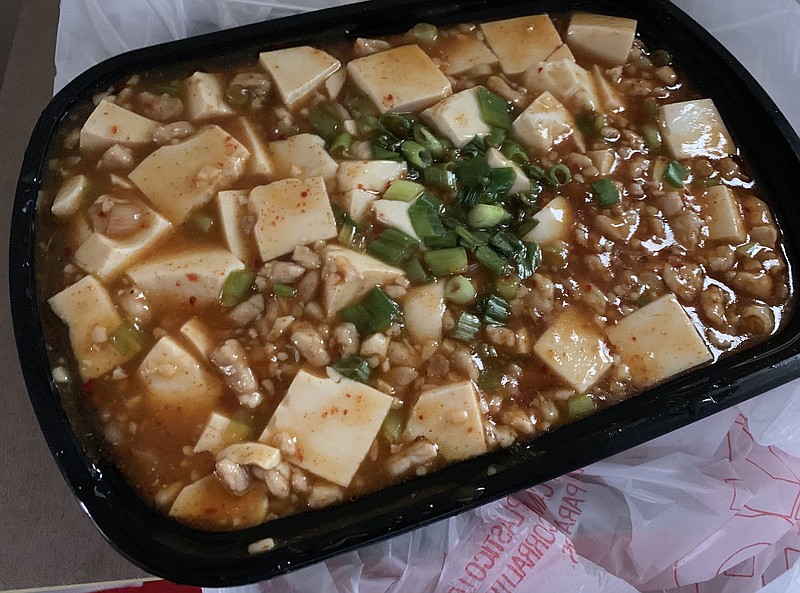 What it means to be a world traveler has changed in this time of plague. We visited the Far East, Latin America and the American South this week — just by doing takeout from area establishments.

This series continues to prove, though we’re a bit sorry to say it and hope it isn’t so for much longer, that you don’t have to dine in at a restaurant to dine well.

Just a reminder that we have been mostly keeping within a 15-minute “still hot — well, OK, it’s still warm” radius of our home table, and that we pay in full for all our meals.

WHAT WE GOT: Ma Po Tofu ($9.45), wonton soup ($1.99), two egg rolls ($2.50). Ma Po is the one dish from Sichuan province that you will find on almost every area Chinese menu, where it has been since before Sichuan (also spelled Szechuan or Szechwan) dishes became popular. It consists of huge chunks of tofu, aka bean curd, in a spicy red-brown-orange sauce with ground meat, usually pork. It’s one of our go-to dishes, and Fu Lin, now under relatively new ownership (it was bought out a couple of years ago by the people who run Mr. Chen’s and a handful of other Little Rock and North Little Rock Chinese restaurants. Here the rich sauce is only moderately spicy, though undoubtedly you can ask them to make it as hot as you can stand, and the portion size is enormous.

Fu Lin, once upon a time, did the area’s absolute best wonton soup, with a hint of sesame oil. Nor are their once top-notch egg rolls what they once were. But both soup and egg rolls are still pretty good. The wontons in the soup are of medium size and good firmness; the egg rolls have a good balance between meat and cabbage inside their firm, crispy shells.

HOW IT WENT: Fu Lin is open for carry-out only, but you can place walk-in orders, which is what we did. It was early in a dinner cycle and it took less than 10 minutes for our order to come out of the kitchen. The dining area is roped off and the entire front counter area is shielded by Plexiglas. The cashier was masked.

HOW IT’S GOING: The phone rang a couple of times and there was one other walk-in order while we waited. 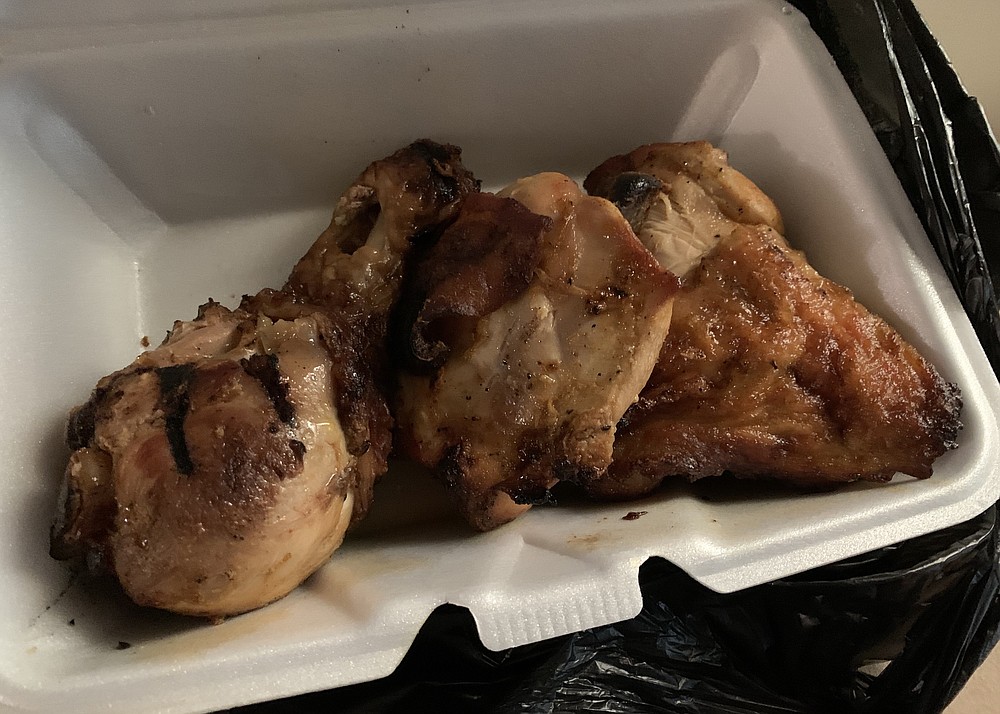 The chicken — in this case, two thighs and a leg — is smoked and grilled at Grill Pollo Famous Latin & American Style Chicken on Cantrell Road at Taylor Loop. (Arkansas Democrat-Gazette/Eric E. Harrison)

WHAT WE GOT: Three-piece Chicken Meal (two thighs and a leg, $8, includes a drink, one regular side and warm tortillas). This new establishment took over the space very briefly occupied by Zen Thai & Fusion, an offshoot of southwest Little Rock’s Zangna Thai Cuisine that was only open for a few weeks, and before that by Blue Coast Burrito and Pasta J’s West. The theme, if you will, is Latin-spiced grilled chicken, smoked, we’re told, for 48 hours and then grilled to order. (The online menu proclaims, “Fresh off the farm, fresh off the grill, never frozen.”) The flavor was superb, the chicken stayed moist and the pieces were huge — we could only get through two pieces, the leg and one thigh, and put the third aside for a later meal. The corn we opted for on the side turned out to be on the cob (hooray!); other side options: rice, pinto beans, green beans, mashed potatoes and gravy, fries, roasted potatoes and cole slaw. Other three-piece options: two legs and thigh, $7.50; two wings and a breast; $8; and two breasts and wing, $9. You can also order two- and four-piece meals, single pieces and family dinners; grilled chicken nuggets; salads, soups, wraps and sandwiches; chicken nachos, tacos and quesadillas; queso, guacamole and salsa; and desserts (churros and flan).

HOW IT WENT: The dining room is open at a very limited capacity. We placed and paid for our order in person. The Plexiglas-protected counter person was not masked. It took about 10 minutes for our order to come out of the kitchen. It’s do it yourself, if you want a napkin and a straw.

HOW IT’S GOING: The place wasn’t very busy early in the dinner process on a recent weekday. 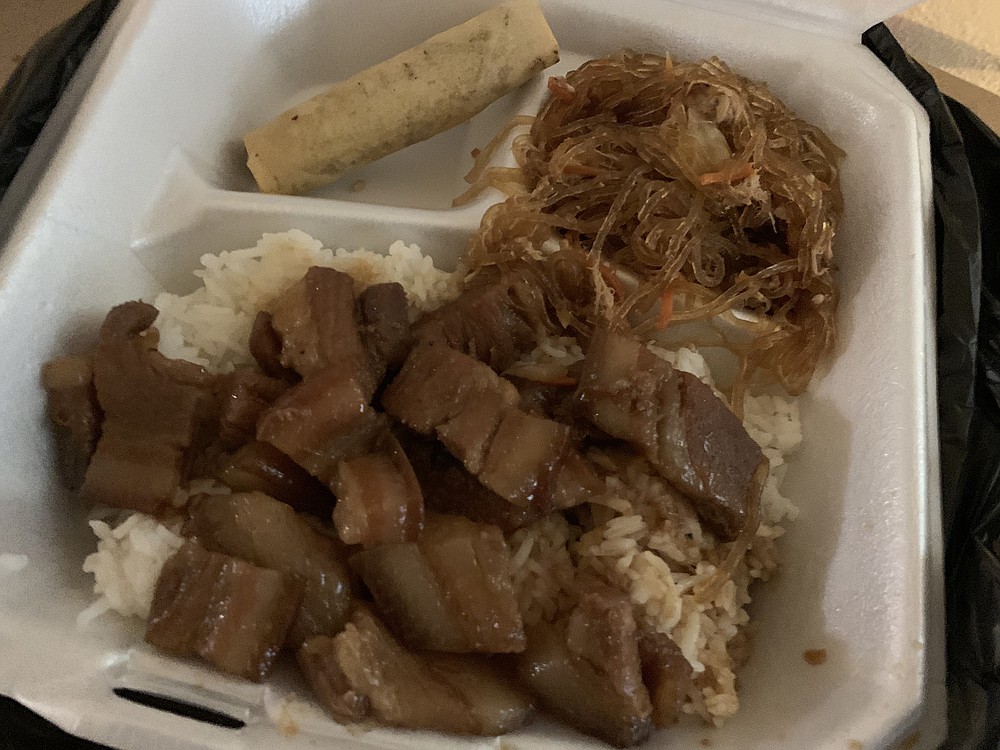 The Pork Adobo from the Filipino Munchies food truck comes on rice with a lumpia and pancit noodles on the side. (Arkansas Democrat-Gazette/Eric E. Harrison)

WHAT WE GOT: Pork Adobo ($12); two lumpia with sauce ($3). Little Rock used to have a quite respectable and, by some, much missed Filipino restaurant on South University Avenue, but that was probably not the best possible location at the time (although other Asian restaurants, including those serving Vietnamese and Korean cuisine, have since gotten a successful foothold in the Broadmoor neighborhood). And so when we spotted this food truck and learned it would be parked outside a downtown bank building, we didn’t think twice. Nor were we disappointed. We got a goodly quantity of pork belly marinated in adobo sauce — usually made of garlic, soy sauce, vinegar, bay leaf, ground pepper and sometimes sugar; a goodly portion of it was fat, but it was tasty indeed, served over rice; it came with one lumpia, the Filipino version of a crispy-shelled spring roll filled with ground pork and mixed vegetables, and a pleasant lump of pancit, thin, glass-like rice noodles.

HOW IT WENT: This being a food truck, we ordered and paid in person. It took about eight minutes to get our food, and it was still hot when we got it home. Everybody inside the food truck was masked.

HOW IT’S GOING: There were a handful of other customers waiting for their orders when we arrived, not bad when you consider how diminished the downtown workforce must be even months into the pandemic. 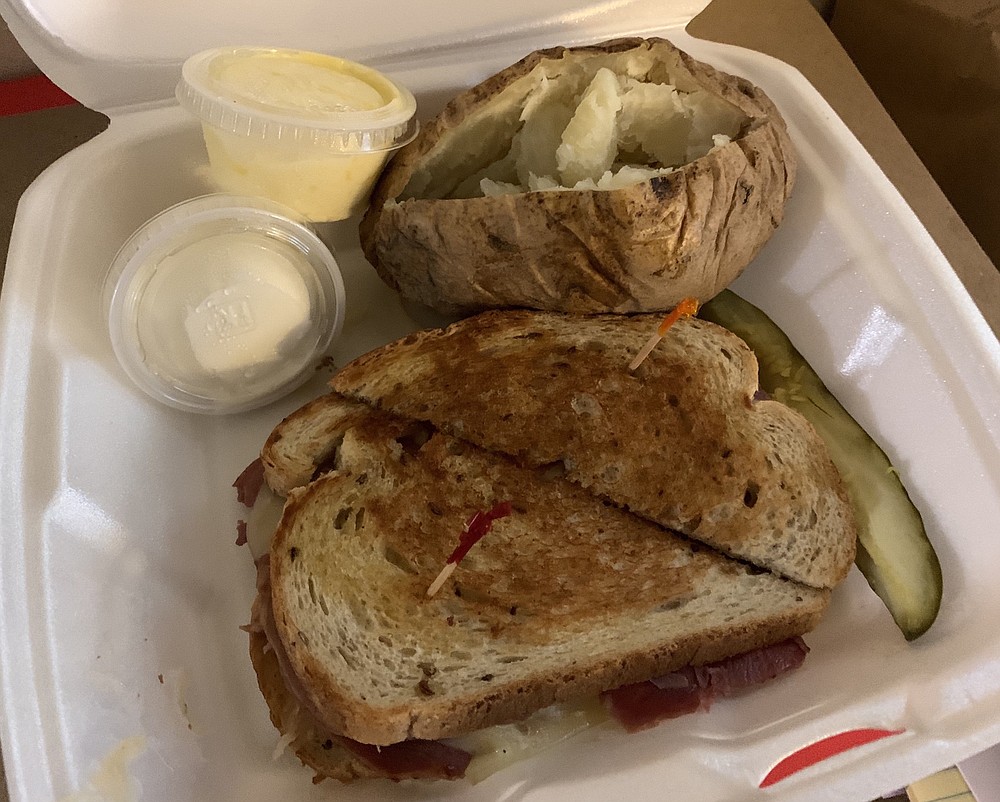 Buffalo Grill in Riverdale makes a mean Reuben. We got a baked potato, with butter and sour cream, on the side in lieu of fries or chips. (Arkansas Democrat-Gazette/Eric E. Harrison)

WHAT WE GOT: Reuben ($9.69); baked potato ($4.79, $2.99 with the sandwich in lieu of fries or chips). We usually think of burgers when we visit Buffalo Grill, but we weren’t in a burger mood, so this time we thought we’d try the Reuben, and were very pleased. The sandwich features a good balance of thin-sliced corned beef, sauerkraut, Swiss cheese and “sauce” — not Thousand Island dressing, thanks — on rye bread. It was wrapped in aluminum foil to keep it hot at some slight risk of getting soggy if we delayed too long in getting it home, which we didn’t. We also opted to pass up fries or chips on the side and paid a bit extra for a nice, large baked potato, which came with ample portions of butter and sour cream.

HOW IT WENT: The restaurant is only open for curbside takeout. We ordered over the phone and paid when we arrived; we had a slightly longer wait than we expected for the masked-and-gloved server to bring it to our car.

HOW IT’S GOING: There were at least a half-dozen takeout bags awaiting customers during a weekday period. 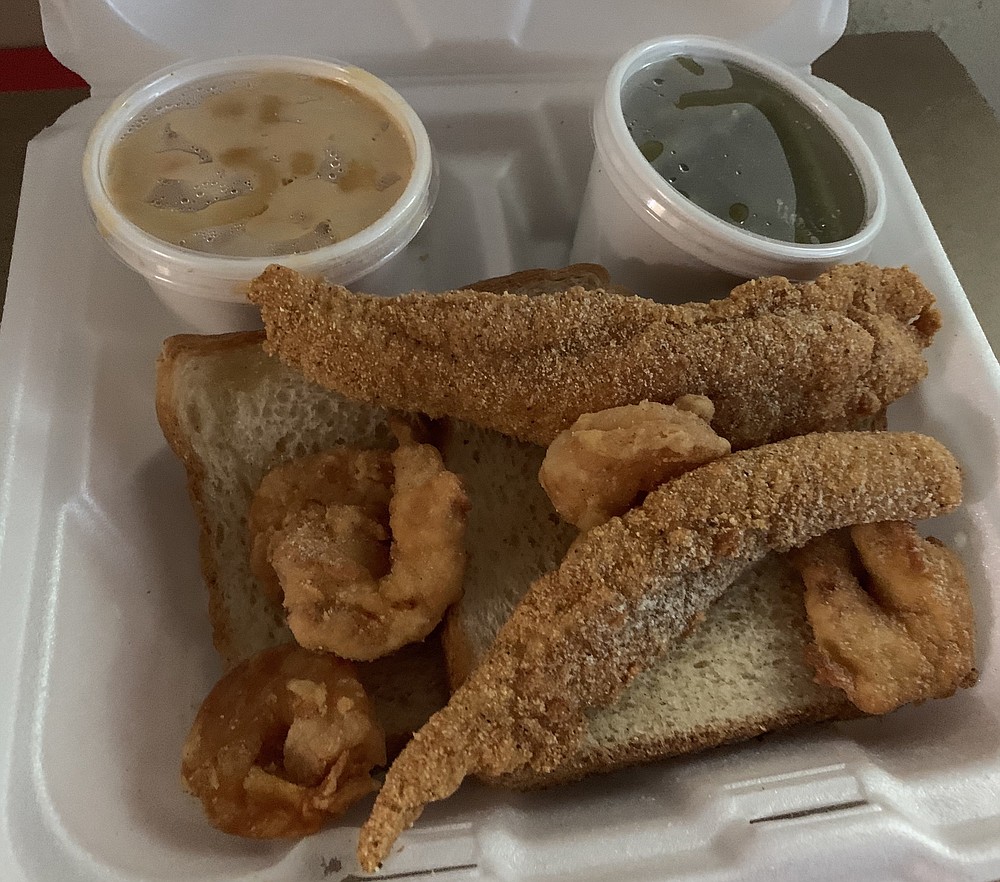 WHAT WE GOT: Catfish Tenders & 5 piece Shrimps lunch combo ($5.99) with two sides. We liked this lunchtime option when we reviewed the restaurant a few months ago and were pleased to return to it. The two catfish strips were once again nicely seasoned and well drained. So were the five medium fried shrimp. We had forgotten this place’s mac & cheese is forgettable, so we turned to it for one of our sides, and, mostly because they were out of just about everything else, the almost equally forgettable green beans.

HOW IT WENT: Red Snapper has opened up a little part of its dining room — just a couple of tables; we entered and placed and paid for our order over the counter. Neither employee — the front-of-house guy and the guy in the kitchen — were masked. It took about 10 minutes for us to obtain our Saturday lunchtime order.

HOW IT’S GOING: Most of Red Snapper’s business goes through its drive-thru window, with a more or less constant stream of cars was picking up orders.