Drinkwitz jumping right in with Tigers 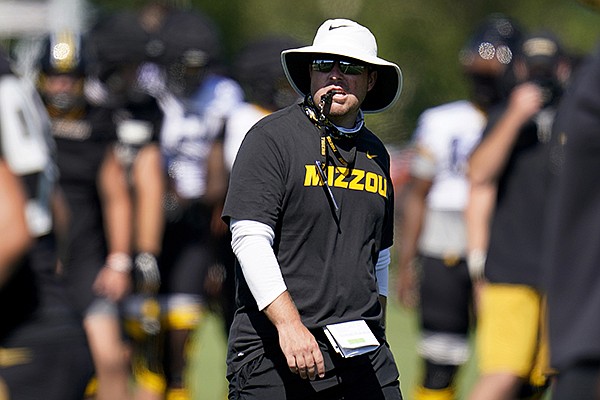 Sixth in a series previewing the 2020 SEC football season.

FAYETTEVILLE -- When it came to the SEC's revamped conference-only football schedule, Missouri got the Arkansas treatment.

In other words, the Tigers got hammered.

While SEC East powers Georgia and Florida were added to the University of Arkansas' 10-game SEC schedule, Missouri got the best of the West with Alabama and LSU.

Eliah Drinkwitz, who will make his debut as Missouri's coach against Alabama on Sept. 26 at Faurot Field in Columbia, Mo., took a diplomatic approach to the scheduling news.

Drinkwitz, an Alma native and Arkansas Tech University graduate, landed the Missouri job after leading Appalachian State to a 12-1 record last season. The former Arkansas State University assistant coach also was a candidate for the Arkansas job before replacing Barry Odom, who was 25-25 in four seasons at Missouri – including 6-6 last year – and is now the Razorbacks' defensive coordinator.

"I chose to coach in the SEC because I wanted to coach against the best," Drinkwitz said. "Everybody's caught up in Alabama and LSU. Well, the other three options [Auburn, Texas A&M and Ole Miss] are pretty stinking good football teams, too.

"It ain't like you're going to dodge somebody. I guess we could have picked the Pac-12 or the Big Ten [which canceled fall sports] and not had anybody to play. So, crud, I mean we play two really good football teams.

"They've got great coaches, great players. They've been in the playoffs. It's a great challenge for our players and our team."

Drinkwitz said he's not going to help Alabama by naming a starting quarterback before the opener and that the Crimson Tide's graduate assistants and quality control coaches will be kept busy studying film from several teams.

"I'm just creating a workload for somebody. So, poor GAs and QCs."

Why so many tapes to watch?

Before Drinkwitz went to Appalachian State, he was North Carolina State's offensive coordinator. He has assistant coaches who previously were at Washington and Alabama-Birmingham.

Among Missouri's quarterbacks: junior Shawn Robinson is a transfer from TCU, where he started seven games in 2018 before being injured; Taylor Powell, a junior from Fayetteville, started against Georgia last season, and redshirt freshman Connor Bazelak started against Arkansas; and true freshman Brady Cook from St. Louis Chaminade.

Robinson completed 124 of 204 passes for 1,334 yards and 9 touchdowns as a sophomore at TCU before missing the final five games because of a shoulder injury. He redshirted at Missouri last season in accordance with NCAA transfer rules.

Powell completed 29 of 62 passes last season for 297 yards. Bazelak completed 7 of 8 passes for 80 yards in the first half against the Razorbacks before tearing a knee ligament, an injury from which he's fully recovered, according to Drinkwitz.

"We're not in any rush," Drinkwitz said of choosing a starting quarterback. "Those things usually reveal themselves pretty easily. So we'll figure it out.

Whoever wins the starting job will have some reliable targets in Barrett Banister, a junior from Fayetteville who had 27 catches for 246 yards last season, and senior Damon Hazelton, a graduate transfer from Virginia Tech who has 133 career catches for 1,834 yards and 20 touchdowns.

Senior Larry Rountree is back to lead the running game after rushing 186 times for 829 yards and 9 touchdowns last season.

Juniors Larry Borom and Chase Cook and Larry Borom are returning starters on the offensive line, which added center Mike Maietti, a senior graduate transfer from Rutgers with 33 career starts.

Senior tackles Akial Byers, from Fayetteville, and Markell Utsey, from Little Rock Parkview, will be in the Tigers' defensive line rotation.

Missouri has seven returning starters on defense, led by senior linebacker Nick Bolton, who had 107 tackles last season. Also back is senior tackle Kobie Whiteside who had 6 1/2 sacks last season.

"The younger guys are older now, and then the older guys are vets and pretty savvy," said Missouri defensive coordinator Ryan Walters, who was retained by Drinkwitz and is going into his fifth season at Missouri.

Whiteside said he's excited about playing Alabama and LSU as well as the rest of the Tigers' SEC opponents.

"I'm happy to see how hard the schedule is going to look," Whiteside said. "I'm really psyched for it.

"Knowing I'm about to play against some future stars and future NFL guys, I can prove myself against them."

Drinkwitz said at the start of training camp the Tigers' focus has to be on themselves.

"Mizzou's got plenty of issues to fix that we've got to work on," Drinkwitz said. "If we start focusing on our week-one opponent right now we're going to miss laying the foundation and improving."