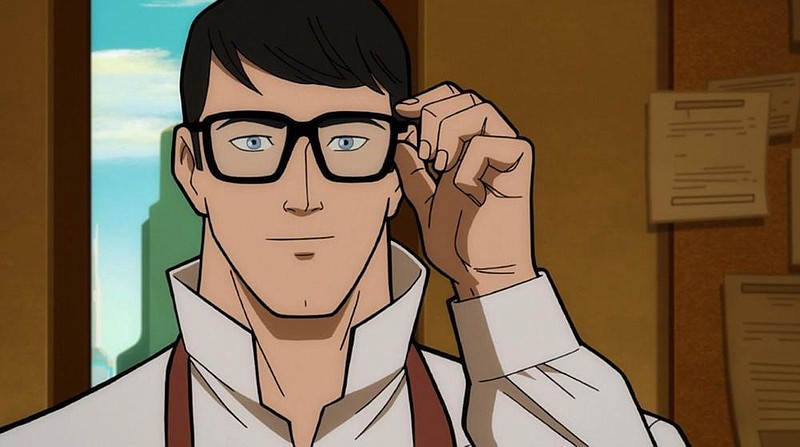 Clark Kent (voiced by Darren Criss) has just started as a news intern at the Daily Planet in "Superman: Man of Tomorrow."

Originally, I expected to have this space reserved for a review of "The New Mutants." But you can probably tell by the headline that didn't happen. I reached out and requested a review link, but I didn't hear back. Guess being a powerful film columnist for the Arkansas Democrat-Gazette has its limits.

Apparently, I'm not the only person who had trouble getting a review copy of "The New Mutants." CNBC reported Disney isn't making the film available to press via an advanced screening or through a digital link. Well, that's just poor policy. So I decided to review the new Superman movie instead.

"Superman: Man of Tomorrow" was released Sunday for purchase on digital platforms. I'll admit this movie kind of snuck up on me. Back in May, I reviewed "Justice League Dark: Apokolips War." It served as the finale for a long line of DC animated films that began in 2013.

This is the first new animated DC Comics movie since then, and I guess it's supposed to kick off a new series of animated movies, the next being "Batman: Soul of the Dragon," coming out next year.

I didn't watch the trailer for this new Superman film going in. But I wasn't excited about the movie. Superman is pretty far from my favorite comic book character. I think it's challenging to write a good story for essentially the most powerful character in DC Comics. And the whole Boy Scout/hero/American way plot has been done so many times. I'm more of a Batman gal myself, and if we're really getting technical, a Nightwing gal.

So imagine my surprise when I stumbled upon a Superman movie that had a different pace from the others. Most Superman storylines are all about Superman needing to stop some big threat before it destroys Metropolis. It gets old, and it's why Clark Kent is a more interesting character when he's paired with Batman or leading the Justice League.

But in "Superman: Man of Tomorrow," the giant monster about to destroy Metropolis storyline took a back seat to Clark Kent trying to figure out what kind of hero he wanted to be. This story featured a young Superman who'd just arrived in Metropolis and didn't even have his costume yet. It was kind of similar to the movie "Batman: Year One."

Better yet, instead of just jumping into superpowers and destroying buildings (which would eventually come later), this movie took time to explore the man in Superman, ask some human questions. Jonathan and Martha Kent were good vehicles for these themes.

At one point in the movie, he's sitting in the kitchen of his parents' home in Smallville, Kan. And he's trying to figure out whether he wants to show himself to the world as Superman. Neither his mother nor his father tells him what to do. Instead, Pa Kent lays out the basic truth. Live as Superman and face the consequences, or don't, and face different consequences.

One of the best themes in this movie was actions having ramifications, and that ranged from Martha Kent giving Superman his iconic suit to how one of the movie's main villains developed.

"Superman: Man of Tomorrow" really added some nice details to flesh out this humanistic theme in Clark Kent. Such as his flying into space for the first time and basking in the sun's direct warmth or the fact that Clark is a new intern at The Daily Planet and lives in a tiny studio apartment (which is shown multiple times).

I also admired this movie picking some different choices for its villains. Sure, Lex Luthor is in the movie. He has to be. You can't have Superman without Luthor. But the writers also chose to insert the space motorcycle-riding, foul-mouthed, bounty hunter known as Lobo. That came entirely out of left field, but not in a bad way.

People who don't read the comics might not recognize Lobo. He doesn't show up in any movies, to my knowledge. But he did appear in the Syfy television series "Krypton." Lobo is kind of like the DC Comics version of Wolverine. He smokes cigars, curses, drinks, and rides a motorcycle (in space). And he made me laugh all through this movie. He was an excellent choice.

Including the Martian Manhunter was another interesting decision for "Superman: Man of Tomorrow." The character didn't show up in Joss Whedon's "Justice League" movie back in 2017, despite being one of the main pillars of the superhero group. Instead, he was replaced by Cyborg, who really belongs with the Teen Titans. I've never understood why DC Comics has worked so hard to put that character with the Justice League. He doesn't fit there.

"Superman: Man of Tomorrow" also had a couple mentions of Batman. I thought the soft touch of including Bruce Wayne was a nice decision. Everyone knows who Batman is. You can just show his picture on a newspaper clipping in this movie, and folks get it.

I struggled a little bit with the art of this film. My first thought upon seeing the opening scene, (which showed Clark Kent as a child watching a scary movie on television) was the art style looked very similar to "Archer." I kept waiting for Sterling to pop in.

The animation wasn't ugly by any means (well, the vehicles were), but I can't say this was much of an improvement over the realistically-proportioned style DC used in its New 52 movies, the previous series that ended with "Justice League Dark: Apocalips War."

I've written about this before, but I much prefer the art style of the Bruce Timm 2001 "Justice League" television series.

The animation in "Superman: Man of Tomorrow" received a lukewarm reception in my heart. I didn't love it. I didn't hate it.

With that said, I was amused by the character design they chose for Lois Lane. I know, she's supposed to be a fresh graduate from J-School and younger than everyone else in the movie, but they gave her this sort of punk rock design. It was pretty cool to see a younger, more conniving Lois who might have been willing to try and steal a story from intern Clark or crash a party with Lex Luthor to snag audio for a big scoop that would land him in prison.

It was such a contrast from the adult professional (but still spunky) Lois Lane we're treated to in other DC animated movies. This film dialed up Lois' grit to 11, and I welcomed it.

Since I watch a lot of animated movies, I get used to listening closely to which actors lend their voices to the characters I'm watching. Sometimes I'm pleasantly surprised. And the curveball "Superman: Man of Tomorrow" threw at me was casting Neil Flynn as Pa Kent. Hearing the Janitor from "Scrubs," voice Superman's father was remarkably amusing.

I think this movie's weakness is its villains, simply that there were too many. Lobo and Lex should have been enough for this storyline. But when Parasite was included, I felt like that was one too many. Lobo made me laugh. Lex is a Superman staple. Parasite ... was just kind of boring and unimaginative. He was also underdeveloped.

I understand the movie wanted to contrast Superman looking human but really being an alien, while Parasite looked like an alien but really started out as a human, but there just wasn't enough time dedicated to really develop that to its full potential. If the writers wanted to go with this storyline, they needed to sacrifice Lex or Lobo's involvement to give it enough time to flesh it out.

If "Spider-Man 3" did anything, it taught me the golden rule for villains: never have more than two in a superhero movie.

But the movie also managed to squeeze in some classic lines like, "Look, up in the sky!" and "more powerful than a locomotive." Those were good callbacks to older Superman incarnations.

"Superman: Man of Tomorrow" is a fresh take on pacing for a Man of Steel movie. I enjoyed it more than recent Superman movies like "Superman: Red Son" and "Reign of the Supermen." I just wish it had gotten a little closer to the art style used in the 2001 "Justice League" cartoon.