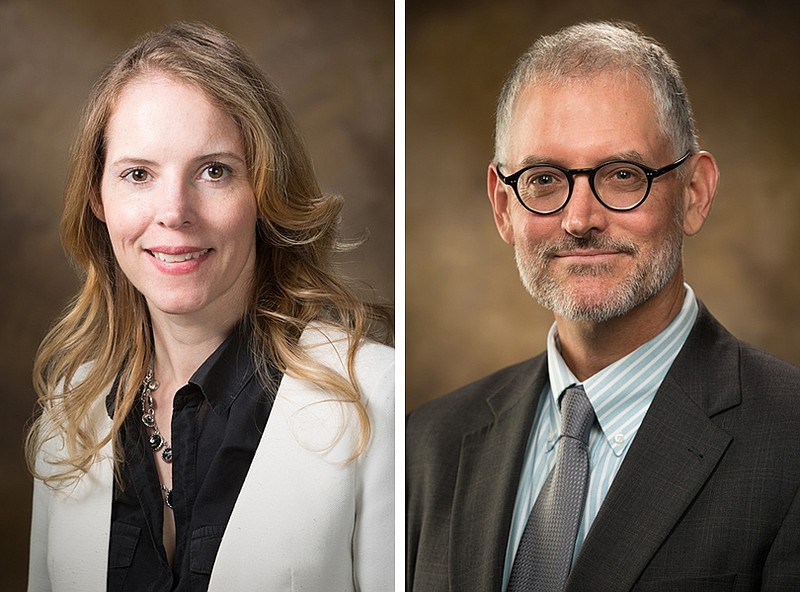 Misty Orpin (left), the Springdale resident behind ArkansasCovid.com, and Rob Wells, assistant professor of journalism at the University of Arkansas, Fayetteville, are shown in this combination photo.

FAYETTEVILLE -- Data journalism students at the University of Arkansas, Fayetteville will handle day-to-day management of ArkansasCovid, a social media account and website begun as a personal project for Springdale resident Misty Orpin that has grown into a major informational resource on the pandemic.

Orpin said she asked UA's School of Journalism and Strategic Media to operate the ArkansasCovid.com site and Twitter account full time after she spent months logging 12-hour-days on the project.

"This decision was prompted by a need to be in an educational support role for my children," said Orpin, 41, a former newspaper reporter. She'll be helping her ninth-grade son, Crey, with online schooling and toddler Cyrus, she said.

Orpin works in a lead marketing role for Black Apple Hard Cider, her family's business. In March, she began analyzing state Department of Health data on coronavirus cases and posting information on Twitter at @arkansascovid.

"Misty's done important and tremendous work bringing clarity to the daily data regarding Covid-19 in Arkansas. She helped fill in gaps, putting together a big and better picture for Arkansans, and she did so in a fair, engaging, and non-political way," Leding said in a text message.

Rob Wells, assistant professor of journalism at UA, will lead the student team working on the ArkansasCovid project.

"It is an incredible experience for my students to learn how to publish real-time news on a respected social media channel that has already established a very loyal following," Wells said.

He said six students in his graduate data journalism class will breakdown the numbers and write posts for social media.

The changeover is set for Sept. 14, but Wells said students will begin working sooner on the project. Some undergraduate classes also may end up helping out what Wells called the "core group." Plans for the site include podcasts and stories tied to the pandemic, he said.

Wells said an early focus is to find ways to more easily manage large amounts of data through computer automation.

Along with her Twitter account, Orpin created visualizations to help make sense of the steady stream of numbers on testing and cases released by the Health Department.

The project fits well with the university's mission is to try to improve communities and the state, Wells said.

"To have students producing real-time data and graphics about a topic that affects the lives of everyone in the state is really significant," he said.

The Health Department is "looking forward" to working with the university's journalism department "to provide important and accurate data and information to Arkansans about this crucial topic," Danyelle McNeill, a department spokeswoman, said in an email.

Wells' students are meeting virtually during the pandemic. He said he had no concerns that working apart could hinder the project.

But it's uncertain what will happen when the students are on break, he said.

"I'm putting together some grant proposals to put some people on payroll and keep some consistent staffing. The idea is to get some grant money to sustain it," Wells said.

No money was paid to Orpin by UA to run the site, Wells said.

"If we get some grant money, we're going to pick up the web hosting fees," Wells said.

Wells began working with Orpin in May. The university provided an intern to help with the project through Arkansas Soul, a UA journalism program with a focus on diversity.

Orpin's ArkansasCovid account has at times been critical of the state's data releases, as recently as Monday stating that she had "lost faith" in the way the state was collecting and managing data.

Wells, formerly a journalist with The Associated Press and Dow Jones Newswires/Wall Street Journal, described Orpin's opinions as based in her research.

But, "at this point, it's not my priority to put that level of opinion in our reporting," Wells said.

The student journalists will have the freedom to write critically "when appropriate and when well documented," he said.

Orpin said she thinks the Health Department "is adding pieces in that they needed to add in" when it comes to data reports, such as the release of school district cases.

She also praised how the state has begun tweeting daily daily changes in case counts and other indicators.

Orpin said she's frustrated, however, with a recent data "cleanup." Orpin said if the state consistently took better care with the numbers, such a "cleanup" wouldn't be necessary.

"Maybe we'll get there," Orpin said.

She said she's proud to have created a space online for people "where they felt they could get reliable information and have good honest conversations with one another." She called it "really gratifying to see people helping one another."

Orpin said she looks forward to participating in conversations rather than leading them on ArkansasCovid.

"I couldn't be prouder of what it has become, and I also couldn't be more grateful to the U of A for continuing it in a way that is going to follow a really high standard for it," Orpin said.