Bears help raise curtain on football in a pandemic 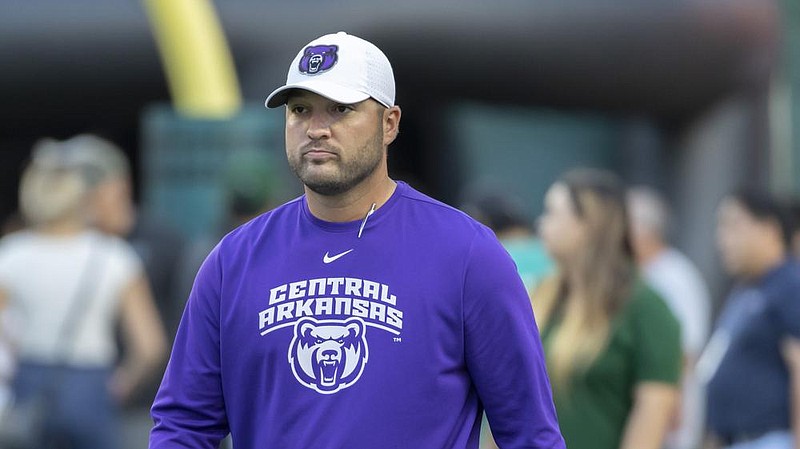 In this Sept. 21, 2019, file photo, Central Arkansas head coach Nathan Brown walks on to the field before the start of an NCAA college football game against Hawaii in Honolulu. (AP Photo/Eugene Tanner, File)

A couple of hours before the start of the season against Austin Peay, covid-19 is on his mind as his team warms up while sporting masks in the south end zone. A couple of days earlier, his team had two positives out of 166 football personnel tested.

He's also thinking about racial injustice, sporting a black T-shirt that reads "WE ARE BEARS" created by a UCA athlete social justice group. A couple of days earlier, the NBA suspended playoff games as players protested the shooting of Jacob Blake in Kenosha, Wis.

But those thoughts are brief. He's got a football game to coach.

"Once that football is kicked off," Brown said, "we're rolling."

The result of Saturday night's prime-time game on ESPN was a mere footnote in the grand scheme of the 2020 college football season.

With the Big Ten, Pac-12, Mountain West, Mid-American and every FCS conference postponing until the spring, the Bears and Governors were thrown into the national spotlight, becoming in many ways the petri dish of college football. Saturday, and the days following it, will help answer the biggest question in the NCAA: Can football -- a physical battle where men swap sweat, spit and snot on every play -- be played during a pandemic?

"We are under a microscope. We're kind of greasing the wheels of getting this thing up and going," said Lauren Sisler, ESPN's sideline reporter for Saturday's game. "This is a big deal for a lot of people, including every team and program in college football. Everyone is wondering: What is college football in 2020 going to look like?"

Saturday is what college football will look like in the era of a pandemic.

"I feel like we're building an airplane while we're flying it," UCA head athletic trainer David Strickland said. "Nobody has seen this before."

There were plenty of nerves Saturday, including one official yelling an expletive before saying "mask" into his mic on the first play of the game -- a sentiment many probably relate to.

But the nerves were not exclusive to the game. For some, those nerves started Thursday when UCA got its covid-19 test results back.

"I was sitting on pins and needles," UCA Athletic Director Brad Teague said. "Those results were everything. They determined what would happen."

Two players tested positive, and neither was on the travel squad.

On Thursday, Friday and Saturday, every player also went through screenings to check for covid-19 symptoms. If any player, coach or staff member showed any symptoms -- from coughing to a temperature above 100 degrees -- they were not allowed on the team's bus.

"Making sure nobody gets on this bus that's sick. That's going to be the key to playing this football season," Brown said. "Not only keeping our players safe, but Austin Peay's players safe."

The Cramton Bowl took its own safety measures Saturday, limiting capacity to 2,000 people instead of its typical 25,000. Ushers were hired to make sure fans were social distancing and wearing masks throughout the game. Signage to keep a distance as well as sanitizer containers were placed around the stadium. Concession stands offered all pre-packaged food, and restrooms were cleaned like an "upscale restaurant," according to executive director for central Alabama sports Johnny Williams.

In the days, weeks and months leading up to Saturday, UCA believed it had done everything in its power to play not only this weekend but also all fall. So far, Teague has put together a nine-game schedule -- the largest in the FCS.

"It has been somewhat of a roller-coaster ride," Brown said. "Seeing players and different universities opt out, I think that developed an uneasiness across the nation. Saturday, we're representing football players and football coaches across the country right now, this weekend."

UCA attempted to socially distance its players and staff by taking three buses and four vans to allow all 72 players -- about 12 players fewer than for a normal road trip -- to have their own seat. Everyone also had to wear N-95 masks. During Friday's trip, one bus got a flat tire half way there, forcing players to double up.

Strickland said one of the most difficult challenges this season for UCA, which has seven road games, is keeping guys distanced throughout trips. UCA has a plan in place in case a player gets sick on the road. A dedicated staff member will quarantine with the player and drive him home in a rental car.

"I think our biggest concern is that we get on the road and someone gets sick. We're hoping that we mitigate that as best we can and catch that by daily screening and temperature checks, and of course the testing before each game," Strickland said. "But you never can tell if somebody is going to start developing and start getting sick on the road. We're stepping on that bus with a covid-negative team. So what we need to do is just keep them that way in our inner-bubble while we're away."

On Saturday before the game, UCA spent its day mostly conducting walk-throughs in conference rooms at the Embassy Suites in downtown Montgomery. The staff made hundreds of packed meals for the team in an attempt to avoid local restaurants.

Strickland is confident that UCA's players will continue protocols such as bringing their own water bottles to practice, not showering in the locker rooms and making players quarantine.

What Strickland is wary of are the actual games. Saturday his staff, consisting of six trainers, monitored players and coaches throughout the game, reminding them to distance -- sidelines were extended to the 15-yard line to help. Players and coaches also were equipped with gaiter masks to wear when not in the game. And water bottles were disinfected after each use.

But there are some things that will be out of Strickland's control.

"When we go down there and score a touchdown, and we try to keep the players from all jumping on each other and high-fiving, we're going to have to do the best we can," Strickland said. "I think that's going to be one of the hardest parts, is trying to remind them that we are in a pandemic and playing a football game at the same time."

But the real test, literally and metaphorically, will come in the days after the game. It's not a question of whether the Bears can play, but whether they can continue to play after Saturday's game.

"If we can do this and keep our athletes safe, then let's try to push forward. And I think we've shown that we can do that," Strickland said. "If we can continue to mitigate and continue throughout this season, then I think we'll be OK. We've just got to keep it up."

UCA will be tested Sunday and Tuesday in Birmingham in preparation for its game against UAB on Thursday. Austin Peay will be tested Wednesday. Its those tests that could play a huge role in college football's fate.

"There's going to be some positives in football. How do we react to that? How do we mitigate that and make sure we are doing everything we can not just for those individuals, but for the rest of our team?" Teague said. "I guess that's what keeps me up at night, is worrying about the covid testing and the spread of the virus and making sure we're doing our part to keep it from spreading as best we can."

All eyes were on UCA and Austin Peay on Saturday. And the game didn't disappoint from the beginning, with Austin Peay scoring a 75-yard touchdown on the first play from scrimmage.

But few will remember the game itself at year's end. It's what happens next that could decide the fate of college football.

"There's still a lot of variables and a lot of things that can happen, but I think this is a step in the right direction and in a positive direction," Sisler said. "But what is the end result of this? Are we able to get through this without a spike in cases? What is the outcome? What is the response afterwards? Were they able to contain everything?" 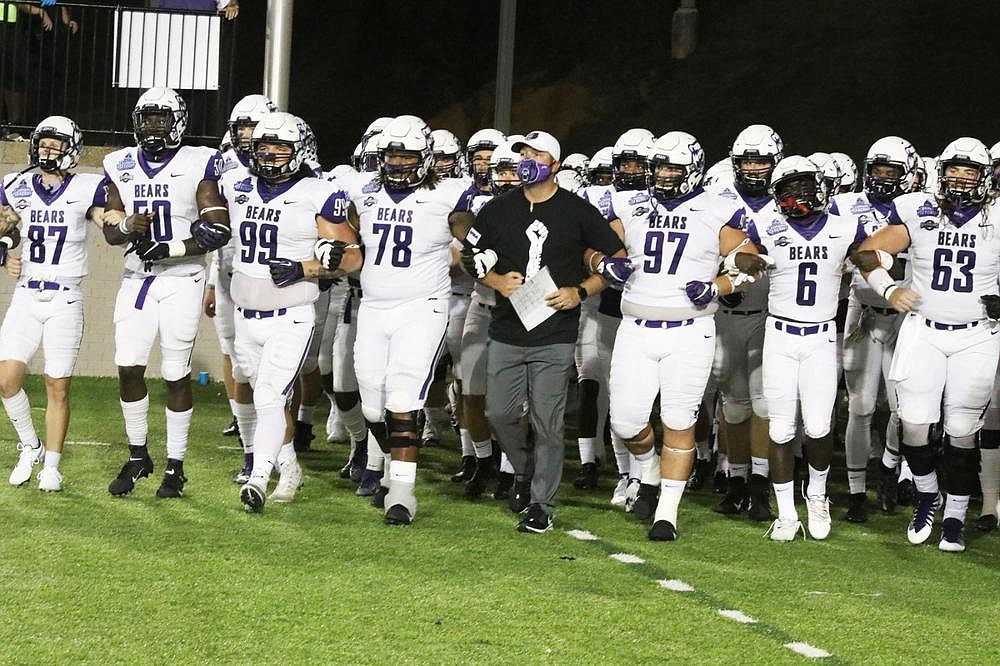 Coach Nathan Brown (middle) walks with his team locked arm-in-arm onto the field Saturday before the Bears’ game against Austin Peay at the Cramton Bowl in Montgomery, Ala. (Photo courtesy University of Central Arkansas)
ADVERTISEMENT