OPINION | GRETCHEN REYNOLDS: Should e-bikes be all the rage? 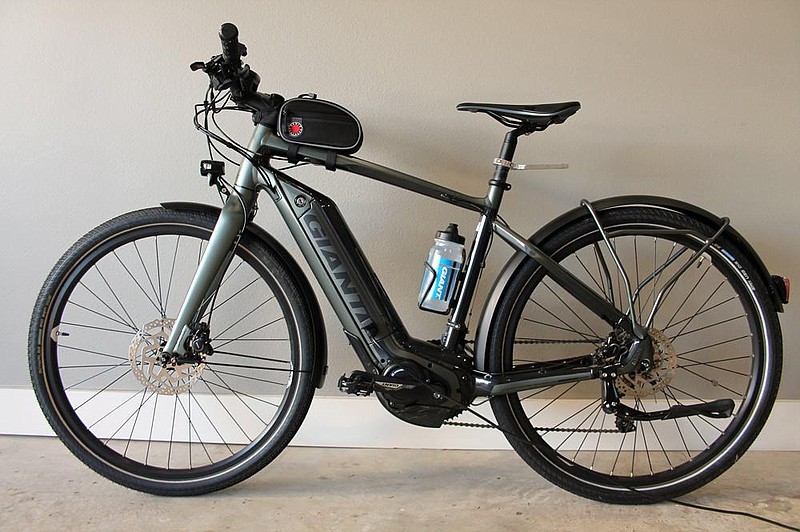 Sales of electric bicycles (such as this Giant model) have increased by 70 percent or more each month since the coronavirus pandemic began. (Arkansas Democrat-Gazette/file photo)

With interest in and sales of pedal-

assisted electric bikes surging during the pandemic, those questions share a growing urgency. Two timely and soothing new studies of e-bike riders' exertions and injuries suggest that the answer to both questions can be a qualified yes, though anyone riding an e-bike needs to remain aware that the experience is certainly cycling with a kick to it.

As most of us are likely aware, bike riding has become extremely popular and aspirational this year, since so many of us are otherwise housebound. Riding gets us outside, active and heading somewhere--anywhere--else. But it also involves distance, hills, wind and sometimes leaden legs, which can be daunting.

Enter e-bikes. Short for electric bikes, these are road or mountain bikes with an added battery-powered motor that gooses our pedaling power.

Most e-bikes fall into one of three types:

• Class 1 e-bikes provide assistance while you pedal, up to a top speed of 20 miles per hour.

• Class 2 models power your ride even if you are not pedaling, but click off at 20 miles per hour.

• Class 3 e-bikes assist pedaling up to a top speed of 28 miles per hour. (Local regulations vary about which bikes are allowed on bike paths, trails or roads. For information about e-bike rules in your area, see https://peopleforbikes.org/our-work/e-bikes/.)

Given their ability to help us cover multiple miles without requiring a spousal sag wagon, e-bikes sales have soared by 70 percent or more each month since the pandemic began, according to industry statistics.

But this popularity may carry a price. Simon Cowell, the acerbic judge on "America's Got Talent," was hospitalized recently after fracturing his back during his first ride on a new e-bike.

Many of us have heard other (sometimes apocryphal) stories about e-bike accidents. And some people wonder if riding an e-bike, with its pedal assistance, even counts as a workout.

On that last count, though, the first of the new studies is reassuring. Published in July in The International Journal of Environmental Research and Public Health, it involved 101 healthy adult men and women in Hamburg, Germany, who agreed to alternate riding either a standard bicycle or an e-bike over two separate two-week periods.

Each volunteer chose his or her preferred e-bike model, with most picking road bikes having top assisted speeds of about 20 miles per hour. To compensate for the novelty factor, participants spent a couple of weeks getting used to their e-bikes before the study period.

The researchers also provided their volunteers with activity monitors, heart rate monitors and a specialized phone app where the riders could record their trips, distance and how physically draining each ride had felt.

The scientists did not offer their volunteers any suggestions, however, about where, when or how often to ride, says Hedwig Stenner, a research associate at the Institute of Sports Medicine at Hannover Medical School, who led the new study. The researchers wanted to see how people, on their own initiative, would use the different bikes, and whether their riding would change with the e-bikes.

Electric assistance did change their habits, the researchers found. In general, the men and women rode more often during the two weeks with e-bikes, averaging about five rides a week then, versus three a week with the standard cycles.

Interestingly, the distances of most people's rides did not budge, whichever type of bike they rode; their rides were not lengthier on the e-bikes, but they were more frequent.

Their heart rates also differed. In general, people's heart rates were about 8 percent lower when they pedaled e-bikes, but still consistently hovered

within the range considered moderate exercise.

bikes, they did not.

Most also reported liking the pedal assist, Stenner says. More than two-thirds of the participants told the researchers they enjoyed the e-bikes and could imagine using them "for many years," according to a final study questionnaire.

But whether e-bikes might pose a greater risk for injuries than standard bicycles remains an open question. "No serious injuries were reported to us" during the research, Stenner says.

The other new study of e-bikes, which was published in December in Injury Prevention, is more cautionary. For it, researchers at New York University's School of Medicine combed a national database of emergency room visits for information about accidents related to riding a standard bicycle, a motorized scooter, or an e-bike from 2000 to 2017.

They found plenty of reports. More than 9 million men, women and children showed up in an emergency room after being hurt while riding a standard bike during those 17 years. Another 140,000 injured themselves on scooters, and about 3,000 on e-bikes (an uncommon novelty in the early years of the study).

In general, the e-bike injuries were the most severe and most likely to require hospitalization.

Why e-bikers tended to hurt themselves more seriously than other riders is not clear from the injury data, says Charles DiMaggio, an injury epidemiologist at NYU Langone Health, who led the new study. But speed likely played a role.

"We know that e-bikes can go faster than traditional pedal cycles," he says, unless you are a bike racer who bombs down hills at more than 20 or 30 miles per hour. "And we know that increased speed often results in more-severe injuries."

But there is encouraging news embedded within the injury statistics, he says. In the earliest years covered by the study, a majority of e-bike injuries involved children under age 18, who seem to have been the earliest adopters of this new cycling technology. The incidence among this group declined precipitously in the later years of the study, though, even as it rose among people aged 45 to 65.

This shift could indicate that the younger riders became "more familiar" with how to ride e-bikes safely, DiMaggio says, a development that, with time and experience, should reduce injuries among other, older riders.

Or the numbers could suggest that fewer young people are using e-bikes, leaving their parents or grandparents to be the ones now to try out e-bikes, and fall off them.

In either case, though, the study's takeaway is clear, DiMaggio says. Before venturing out onto roads or paths on an e-bike, "familiarize yourself with the bike," he says. "Wear a helmet. Follow traffic rules. Don't drink and ride."

E-bikes, at heart, are bikes, so if you can ride a bike, you can ride an e-bike. "You'll just feel as if you have superhero legs" on the amplified electric versions, says Ian Kenny, the e-bike brand leader for Specialized, a bike company that makes electric road and mountain bikes.

E-bikes boost cycling speeds, though, so most new riders would benefit from some practice spins in a protected area with little traffic before venturing onto roads or paths, Kenny says. Look for a large empty parking lot or a road closed to traffic during the pandemic for your first few rides.

Practice slowing and braking too. "Because e-bikes are heavier and travel faster, they will require more time and distance to stop" than a standard bike, Kenny says.

When you do head for the open roads or paths, remember to monitor your battery life. The miles can slip by while your pedaling is aided, but the return trip will be long and grueling if you have drained your battery, especially since e-bikes, in general, are heavier than standard bicycles.

Finally, wear a mask if you are around other riders and pedestrians, and perhaps add a jaunty bell to your bike, if it was not standard equipment. Sound it before passing anyone.

"Treat others as you would like to be treated," Kenny says. "It's never fun to be startled by a zooming cyclist."

Scott Acord (left) and Holly Acord take a test ride during the launch of a bicycle rental station at Chattanooga’s Tatum Park in July 2019; it’s wise for riders to familiarize themselves with e-bikes before taking to the roads. (Chattanooga Times Free Press/file photo)
ADVERTISEMENT