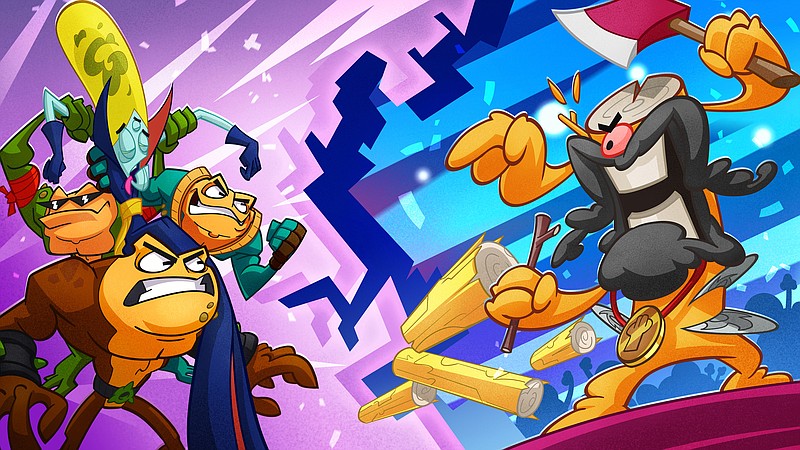 Despite hours of mind-numbing effort, I could not conquer "Battletoads" as a kid. The 1991 beat-'em-up video game requires superhuman reflexes and monkish levels of patience.

Taking on the classic on the NES or Xbox One is torture. Thumbs will ache, controllers will be thrown, tears will be shed and curses will reverberate throughout the house. It's a horrible experience, yet "Battletoads" is still revered among core players. Half the allure was its advanced visuals for the 8-bit age and the other part was that challenge.

Platform: Xbox One and PC

Rating: Everyone 10 and up

Almost 26 years after the latest entry, "Battletoads Arcade," has rebooted the franchise. Developed by Dlala Studios and Rare, it has a drastically different look and updated gameplay. It could seem excessively different with its voiced characters and hand-drawn graphics, but after dying a few times on a turbo bike level and yelling expletives, they'll feel at home.

"Battletoads" (2020) looks like a playable cartoon in the style of "Ren and Stimpy" or the "Fairly OddParents." Rash, Zitz and Pimple have exaggerated features that distinguish them on screen. They also have unique sets of moves and attributes. Pimple, the burly one, moves more slowly but packs a punch, while Rash is more agile and relies on splashier moves. Zitz is the best all-around fighter.

The campaign begins with the Battletoads walking down a red carpet like celebrities, beating up the occasional ne'er-do-well. This introduction teaches players new moves, as well as the basics. Soon, the trio realize that they've been stuck in a virtual dome for more than two decades. The world has changed, and they're nobodies who have to get a day job. It's a far cry from the Battletoads' heyday when they were knocking the Dark Queen into outer space and saving the galaxy.

"Battletoads" is self-aware. It has a wry sense of humor as it puts the washed-up warriors in menial jobs, which are essentially mini-games. It seems as if the amphibian warriors will fade into obscurity until a series of events pits them against the Topians -- Uto and Pia.

The two are comparable to the Celestials in the Marvel Universe, and they are responsible for the Battletoads' long imprisonment. With that in mind, Rash, Zitz and Pimple head out to fight them after visiting a familiar foe.

The adventure isn't a straight line to revenge though; it takes halting detours across four acts. They're jarring and more often played for forced laughs. Players will run into an episode that resembles "Weekend at Bernie's," while others are an excuse to bring puzzle elements and "Galaga"-style levels into the gameplay.

Although "Battletoads" ends up sidetracked with these stages, Dlala and Rare do a surprisingly good job of mimicking the challenge of the original. The combat is more complex with the trio having light, heavy and morph attacks. Players will rely on an evasion button to dodge punches, while another button lets Zitz, Rash and Pimple spit gum to slow foes or lash a tongue out to eat health-giving flies.

Overall, the fisticuffs are more complex, testing players' strategy as they figure out which adversaries to prioritize and how to use the new moves to finish foes off quickly. In the single-player mode, a player can cycle through each Battletoad during combat. If one loses all its health, it's defeated for a short time. Players have to stay alive for that countdown to use the hero again. If all three faint, they must start over from a checkpoint.

With all its complexity, the new moves don't always work well. Punching and kicking are fine, but the gum and tongue lash become unwieldy. As the screen fills with 15 foes, it's tough to target a specific one. Players will fire blindly, hoping something sticks. In the multiplayer mode, teammates can revive one another, but it also puts pressure on the whole squad to be great at combat. If one ally falls, they'll have to revive them and stay alive. The anarchy onscreen makes the game harder.

Also right are the vehicle and obstacle stages. This is where old "Battletoads" tested players' skill, and the new carries that same DNA. Players will jump aboard turbo bikes to race to a theme park by dodging walls and jumping over pits. It's an echo of the infamous Turbo Tunnel, but the difference here is that this challenge comes from a vertical perspective. It may look different, but it still requires split-second timing.

That vibe carries over to the difficult Mis-treatied stage, which requires precise button presses as the toads glide and grind rails using an, ahem, makeshift sled. It's the campaign's hardest level. Other challenges come from outracing a pit of acid as players make their way down an obstacle course, or doing several timed puzzles in a row to save a ship from exploding.

These stages are challenging, but with generous checkpoints and some perseverance, players can complete it. In the original, success was rewarded by a glimpse of what the next level looked like. In the reboot, the payoff comes from watching a long, animated cut-scene that could be mistaken for a Nickelodeon cartoon.

"Battletoads" is nowhere near perfect, but it captures the essence of the original.