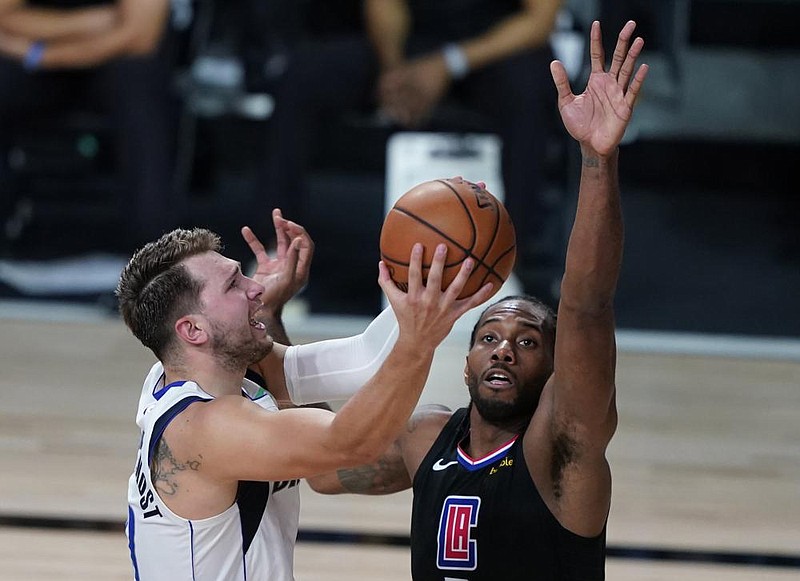 Kawhi Leonard (right) of the Los Angeles Clippers fouls Luka Doncic of the Dallas Mavericks during the second half of Sunday’s first- round playoff game in Lake Buena Vista, Fla. Leonard had 33 points and 14 rebounds to lead the Clippers to a 111-97 victory to win the series. (AP/Ashley Landis)

LAKE BUENA VISTA, Fla. -- The Los Angeles Clippers knocked him around and shut his teammates down, and still Luka Doncic kept coming.

Kawhi Leonard wasn't worried, because nothing rattles him in the postseason.

"This is playoff basketball and everything is not going to go your way," Leonard said. "You're going to have downs and ups. Just got to keep playing."

Now his team will keep playing into the second round.

Leonard had 33 points and 14 rebounds and the Clippers eliminated Doncic and the Dallas Mavericks with a 111-97 victory Sunday in Game 6 of the first-round series.

Doncic capped a superb first postseason with 38 points, 9 rebounds and 9 assists, keeping it interesting into the fourth quarter even while playing without injured teammate Kristaps Porzingis.

But with Leonard reaching the 30-point mark for his career-best fifth consecutive playoff game and a strong defensive effort, the Clippers simply had too many answers.

"I'm proud of our team, how we fight," Doncic said. "I think we fight until the end. The Clippers have an amazing team so it was hard, but I think we gave everything."

Paul George and Ivica Zubac added 15 points each for the Clippers, who turned up their defense in this one after winning Game 5 with the best offensive performance in their postseason history, when they shot 63% and romped to a 154-111 victory.

Perhaps it was too much to ask to be that sharp again after a four-day layoff, but they didn't need to be even while playing most of the game without starting forward Marcus Morris, who was ejected for a flagrant foul against Doncic in the first quarter.

"You can tell he was the one guy that shoots to close out a series," Clippers Coach Doc Rivers said. "He was calm. He got us in place."

The Mavericks had two field goals in the first six minutes of the third quarter, both by Doncic, and by the time he made the second the Clippers had opened the half with a 20-3 run that turned a six-point advantage into a 77-54 lead.

But Doncic wouldn't quit, with a three-pointer and two three-point plays in the final 1:28 to cut it to 85-74.

He made another three-pointer that trimmed it to 88-82 with 9:27 to play but Dallas couldn't get any closer. Los Angeles began putting the ball in Leonard's hands and he delivered with eight consecutive Clippers points before consecutive three-pointers by Reggie Jackson pushed it to 105-89.

Dallas was in its first postseason since 2016 but quickly learned about the physicality, mixing it up with Morris on multiple occasions.

The Clippers led by two when Morris was ejected for swinging his arm down and striking a driving Doncic in the head or neck area. The Clippers picked up their defense in the second period, limiting the Mavs to 17 points and 33.3% shooting to open a 57-51 advantage at the break.

The Boston Celtics clearly have the formula to create problems for the Toronto Raptors.

Jayson Tatum and Marcus Smart each scored 21 points, Kemba Walker added 18 points and 10 assists and the Celtics never trailed on the way to beating the Raptors in Game 1 of their Eastern Conference semifinal series.

The Celtics improved to 4-1 against the Raptors this season -- no other team has beaten the reigning NBA champions more than twice -- and both of their meetings in the NBA's restart bubble at Walt Disney World have been one-sided.

Toronto is 0-2 against Boston at Disney, losing by a combined 40 points and not leading for a single moment in those two games. The Raptors are 11-0 at Disney against everybody else.

Jaylen Brown scored 17 points and Daniel Theis finished with 13 points and 15 rebounds for Boston, which is 5-0 in this postseason.

Kyle Lowry had 17 points for Toronto, which got 15 from Serge Ibaka, 13 from Pascal Siakam on a day where he was slowed big-time by early foul trouble and 12 from OG Anunoby. The Raptors were outscored 51-30 from three-point range.

Toronto has lost four games by more than 15 points this season -- three of them against Boston. The other was a 20-point loss to the Los Angeles Clippers on Dec. 11. 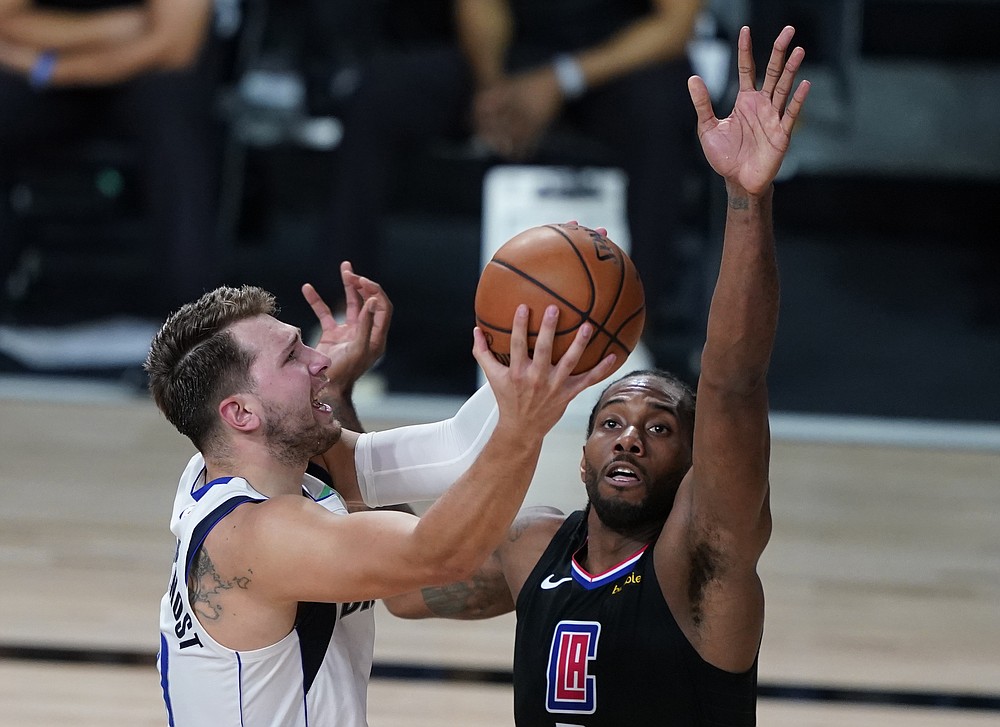 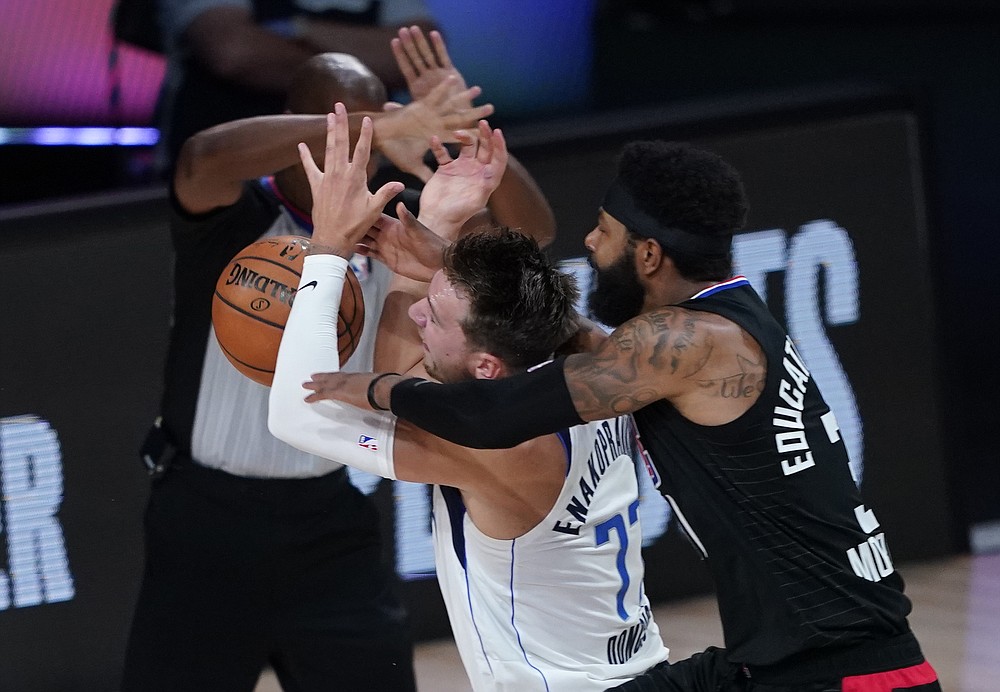 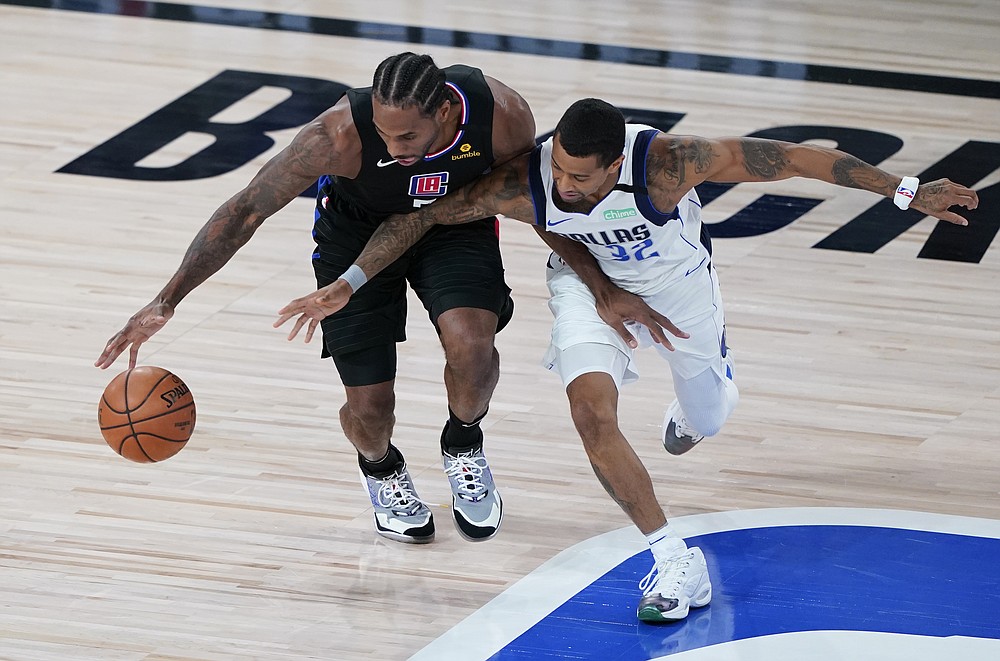 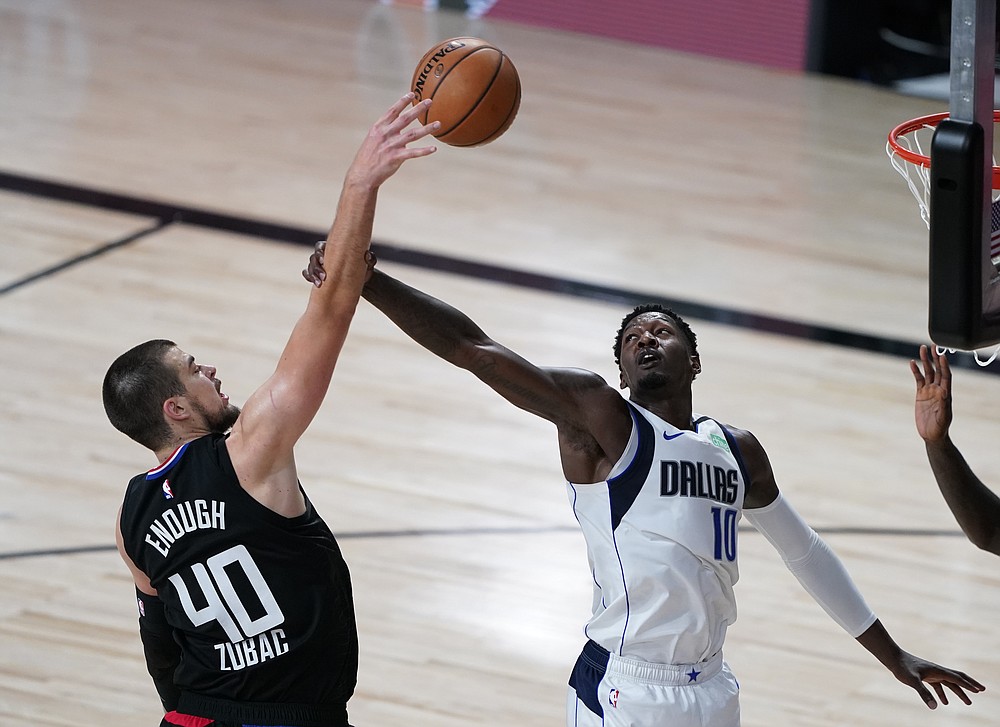 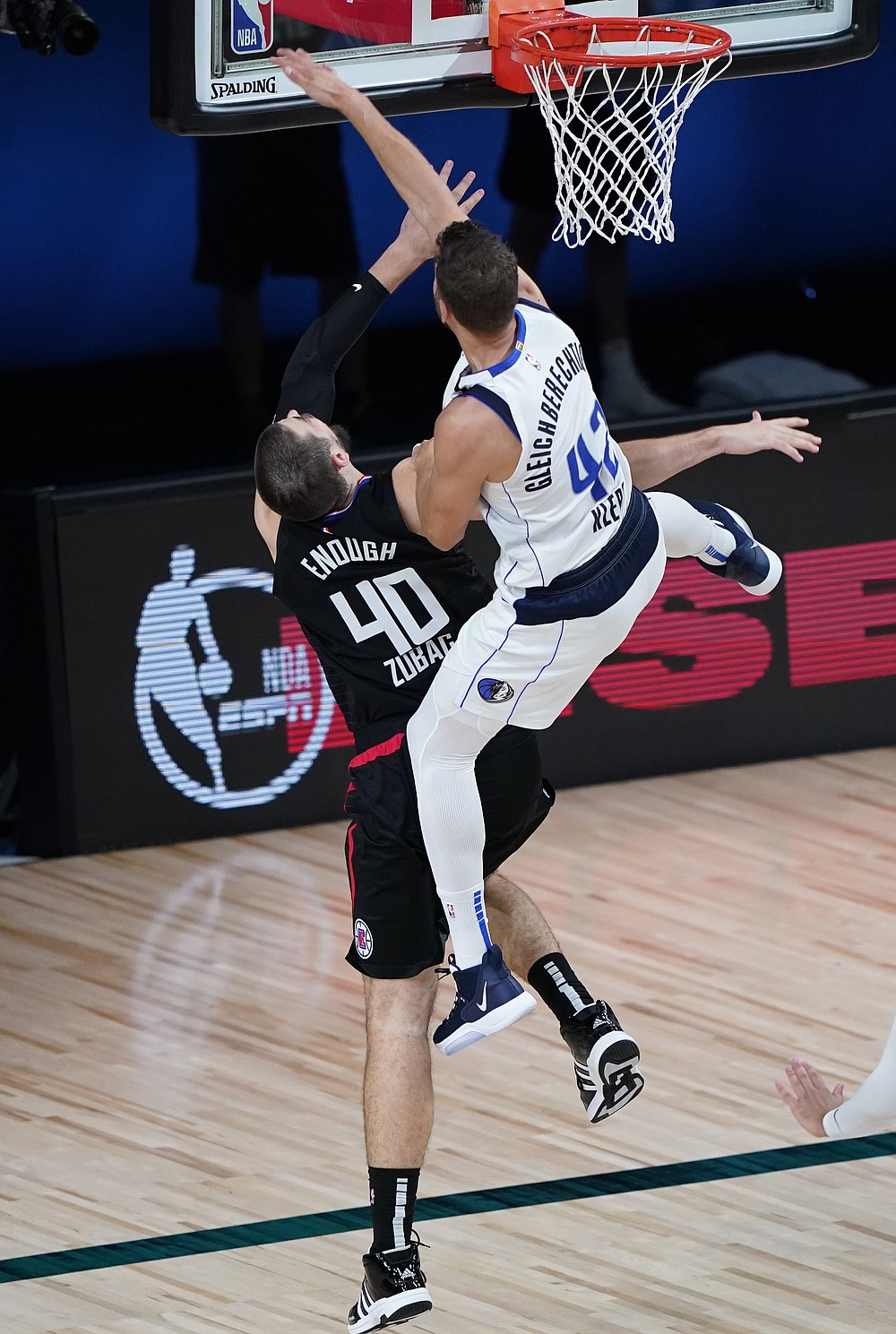 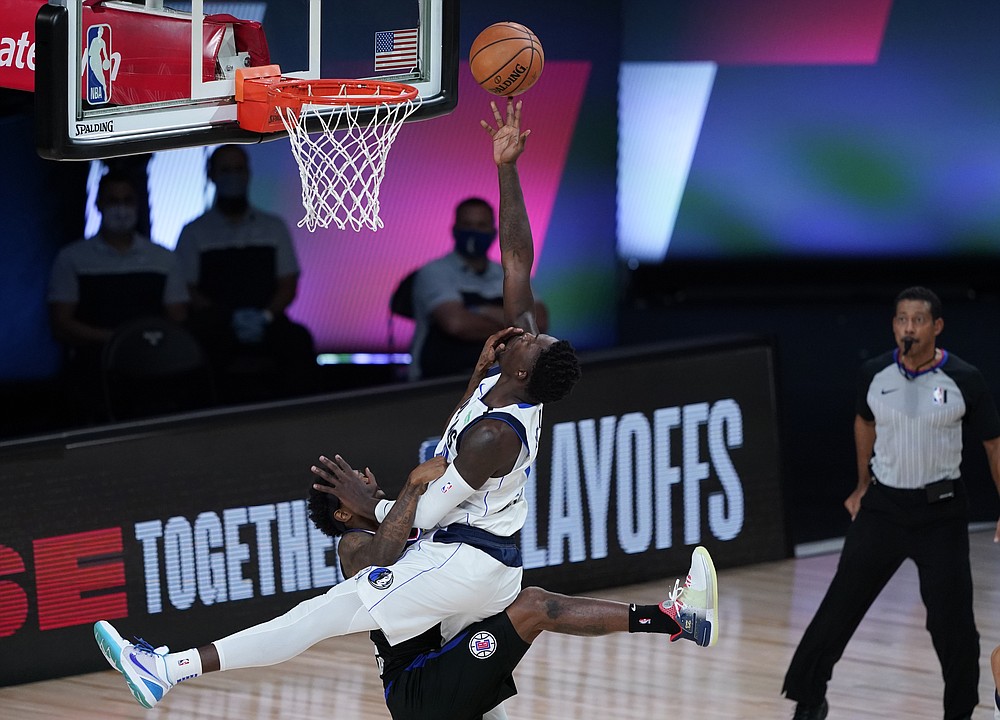