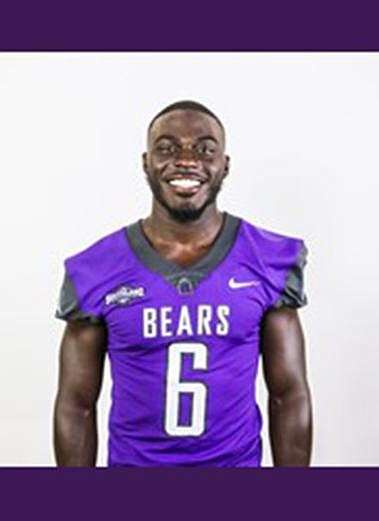 Saturday, 64 years later, Blakey's grandson and University of Central Arkansas senior Dwight Blakey found himself in a similar position. With help from a few teammates and coaches, he organized his own social justice statement in Montgomery, Ala., responding to the shooting of Jacob Blake in Kenosha, Wisc.

On national television, Blakey and his teammates took the Cramton Bowl field locked arm-and-arm, alternating between black and white players and then, right before kickoff, every player, coach and staff member held a single fist in the air.

"It was way bigger for me," said Blakey, a wide receiver for the Bears. "Doing what we did, it meant the most to me because that's history shown and history made all at the same time."

The night before in the Montgomery Embassy Suites conference room was when Blakey thought of the idea. He and the three other football members of UCA's social justice committee -- senior wide receiver Tobias Enlow, senior defensive back Leandre Rucks and junior quarterback Breylin Smith -- met with Coach Nathan Brown to discuss what type of statement they wanted to make.

In the wake of NBA players boycotting the playoffs on Wednesday, Thursday and Friday, UCA wanted to make their voices heard in the first college football game of the season. And there was no better place to do so than on ESPN Saturday night in Montgomery.

"I think it was a very powerful moment. Maybe one of the cooler moments I've had in my coaching career," Brown said. "Who would have thought eight, nine months ago when Dr. [Brad] Teague got called about this FCS Kickoff game here in Montgomery, Ala., that we'd be in the situation that we are as a country. It's no secret that things work in mysterious ways and I think we were placed here for a reason. We are placed in the middle of the Civil Rights movement.

"You want to push the needle? You want an opportunity to have a platform? What better place to do it than Montgomery, Alabama."

The players never considered boycotting Saturday's game, despite teams in the NBA, MLB, NHL and MLS doing so around the country. Thursday morning, following the NBA player strike that shook the sports world, Teague, the school's athletic director, wondered if his or Austin Peay's athletes were considering not playing.

But that wasn't the case. They knew the type of stage they were going to be on.

"I felt if we would have done that it would have taken our microphone away. We wouldn't have had a voice," Rucks said. "We knew that we were on a national platform and we wanted people to know that we were standing with them. We basically wanted to use ESPN to push that motive. And had done a lot of things throughout the summer kind of planning and talking about something like this."

Over the past several months, UCA has been at the forefront of allowing its athletes speak out against racial injustices. Following the death of George Floyd in May and the national protests that ensued, Teague formed the UCA social justice committee in June.

The group is composed of at least one minority athlete from each team and multiple coaches and staff members, including Brown and Teague. The group meets nearly every week and has created the slogan "We Are One" to symbolize unity on the field, in the locker room and on campus.

"We let our student-athletes tell us how they're feeling, what they're going through, things that we don't know or understand or don't experience," Teague said. "We're trying to listen and be supportive and be active and engaged and sustain this. And that's really what they want -- let's not let this be forgotten in a few weeks."

The committee has allowed players such as Blakey and Rucks -- who are both considering pursing careers in Civil Rights after their football playing days -- to find their voice and speak on important topics. It also allows for coaches like Brown listen and learn from his players.

"I just wanted to make sure as the head coach I'm being a part of the solution," Brown said. "I'm not just using empty gestures on social media, but we're acting on it and we're trying to continue to push the needle and not let this subject get stale. All of our players and staff want to continue to push this cause -- 'We Are One.' That's our saying. That's who we are."

Blakey's grandmother, now 93 years old, watched UCA's dramatic 24-17 victory from her Montgomery home Saturday night due to covid-19. Following the game, she spoke with Blakey over the phone, proud of her grandson and his teammates who are following in the footsteps of giants.

"This was always something I wanted to do. I remember visiting Montgomery and learning its history," Blakey said. "She was so excited to see us on TV doing that because she did that many years ago. She was wishing a blessing upon us."