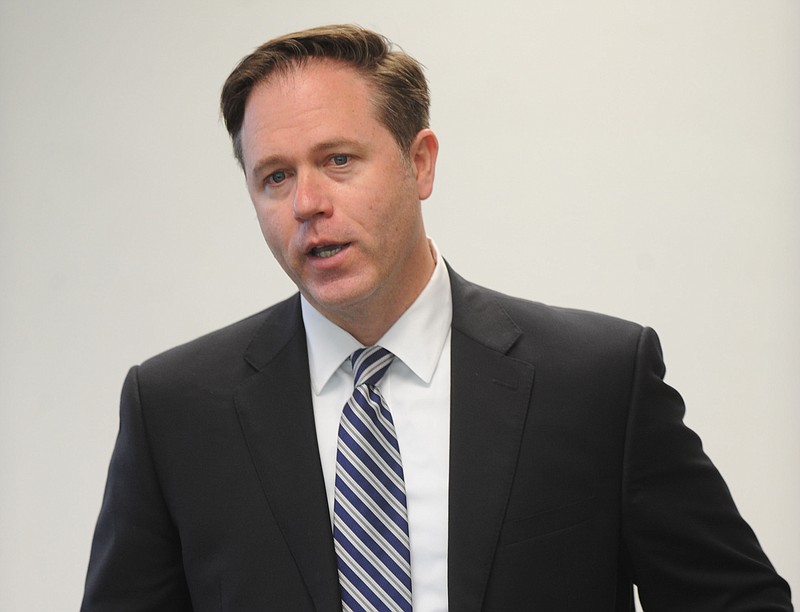 Nelson Peacock speaks Tuesday, June 13, 2017, after being announced as the new president and CEO of the Northwest Arkansas Council. Peacock will begin his duties in July after serving as senior vice president of government relations at the University of California Office of the President. ( Andy Shupe)

President-elect Joe Biden is familiar with the workings of Washington, D.C., and his political experience will be an asset, said Nelson Peacock, the Northwest Arkansas Council president and CEO.

"In many ways, I think he's the right person to help us heal and get back to some sense of normalcy. I know it will be difficult because we're in divided times, but it feels like he has the right sensibilities to be able to do that as well as anybody," Peacock said.

The Woodruff County native was a Senate Judiciary Committee staff member for five years, serving as counsel to Biden, a longtime committee member and former chairman.

Peacock said he "learned a lot about how that place functions" from the Delaware Democrat and others on the staff.

By the time Peacock came aboard in February 2004, Biden was already in his sixth term.

Biden "had a reputation for bipartisanship," he said.

The focus wasn't on generating legislation that would go nowhere, but on getting things done, Peacock said.

That meant working across the aisle, he said.

"We would have to find a Republican [co-]sponsor, pretty much to do anything, because that was the only way anything was going to get passed," Peacock said. "Normally we would go to someone like Arlen Specter [of Pennsylvania], Orrin Hatch [of Utah] or John McCain [of Arizona], and those would be the individuals that we would try to work with."

Relations were cordial, even when viewpoints diverged, he said.

Biden and McCain "disagreed on everything, but they were friends and they had a lot of respect for each other," Peacock said.

In January 2009, Biden became vice president. Peacock soon joined the Department of Homeland Security as assistant secretary for the Office of Legislative Affairs.

While Peacock focused on security matters, Biden had to worry about economic threats as well.

Biden worked to secure passage of the American Recovery and Reinvestment Act of 2009, a stimulus package designed to help the U.S. economy weather a massive economic crisis.

As vice president, Biden "had a lot of work to do with the Recovery Act and a lot of different issues that he was able to successfully navigate. I think he is very well-prepared," Peacock said.

As president-elect, Biden has assembled an experienced group of advisers, Peacock said.

"I think you see there's a team coming in that has government experience, and I think they will do the job and get everything moving forward," he said.

Between now and Inauguration Day on Jan. 20, transition efforts will be "critically important," he said.

"If you look at our government, it's the largest employer in the country with ... dozens of agencies, each with statutory obligations, statutory deadlines [and] activities that impact the American people," he said.

"You can't just flip a switch" with inauguration, he added.

While working at the Department of Homeland Security, Peacock was able to see the transition process up close.

Roughly six months before the 2012 presidential election, the department began preparing for the possibility that Republican Mitt Romney would defeat President Barack Obama, he said.

The work proceeded "just in case" the Democrat ended up being a one-term president, Peacock said.

"For those working in the administration, we were focused on wanting to win and keep doing the work, but you have to prepare for the eventuality that the American people would want to make a different choice," he said.

"He sent a team of his senior advisers along with the senior people on the transition team and they flew out to Arizona to visit with her, and they had a team there for about a week briefing her," Peacock said.

"For those national security positions, it's essential to hit the ground running," he said.

With the nation facing a pandemic, cooperation will be particularly important as the government prepares to roll out covid-19 vaccines, he noted.

While the final numbers are still being tabulated, it appears that President Donald Trump will finish with at least 74 million votes, Biden with more than 80 million.

"That's a pretty divided country, but you still have to move things forward," Peacock said. "I think the people expect our leaders to compromise and find that common ground."