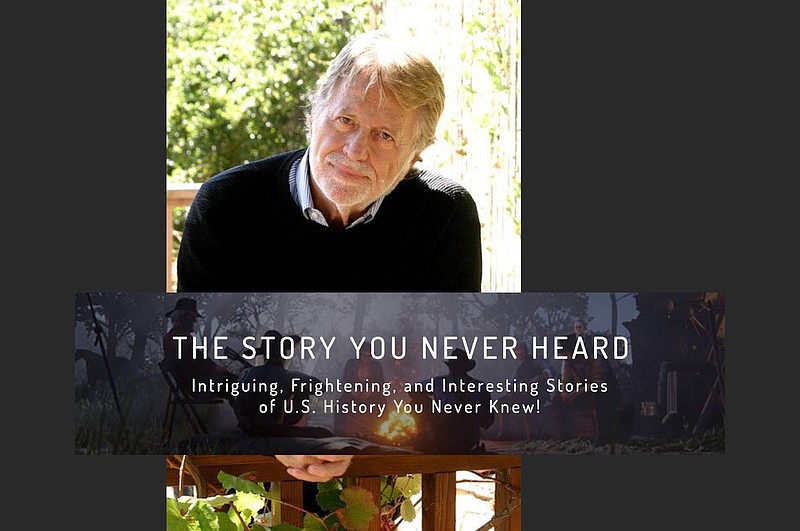 Hampton native Harry Thomason is keeping busy these days with his new storytelling podcast, “The Story You Never Heard.” (Special to the Democrat-Gazette)

Harry Thomason insists he's not a "writer writer" like his wife, Linda Bloodworth Thomason, his partner in Mozark Productions and the creative engine behind the television series "Hearts Afire," "Evening Shade," "Women of the House," and most famously and indelibly, "Designing Women."

("Designing Women" will be resurrected in the form of a play, now tentatively set to make its world premiere at Fayetteville's TheatreSquared in April. Covid-19 delayed the play's opening, but Thomason says his wife has made good use of the pandemic pause, rewriting the third act to incorporate certain topical themes.)

Thomason says that as familiar as he may be with his yarns, the ones he reads on his latest venture, "The Story You Never Heard" podcast, and that he has been telling for years or decades, it takes a while to get them down on paper. It takes hours to stack up the 1,200 or so words that lead to eight or nine minutes of content.

He's probably heard the quote usually attributed to Thomas Mann: "A writer is someone for whom writing is more difficult than it is for other people."

Then he reads it aloud, paragraph by paragraph, lumbering along in his comfy-chair voice, fuzzy and soft and deeply Arkansan. There's no drift to the mid-Atlantic, no neutralizing newscaster default to General American. The accent is authentic and unlabored, but it still takes him about five hours to record a script.

Billy Bob Thornton once did a voice-over for a 90-minute documentary in about two hours, but BBT is gifted. Anyone could see that. He showed up to do a walk-on bit, to deliver a single line in one of Linda's shows, and they both knew they had to build a show around him.

Thomason is not gifted. He's an old football coach and speech and history teacher from Hampton, a patch in south-central Arkansas between Camden and Warren. That's the position he's staked out, the ordinary guy who had the good fortune to get to know the talent and work behind the scenes, producing, directing, supplying coffee and doughnuts. He doesn't mind if you think he's been lucky — he has been lucky. But he's also one of those people who always seems to be in the room, watching and absorbing and warehousing the information.

Thomason was there when his boyhood neighbor Charlie Pierce, the director of "The Legend of Boggy Creek" (1973) and "The Town That Dreaded Sundown" (1976) who has a claim on being the first genuinely independent filmmaker of the modern era, was wading around ankle-deep in the cash receipts he and Harry collected from theater box offices. He has known Bill and Hillary Clinton since their grad-school days.

He has plenty of stories. He told some of them — mostly ones from his Arkansas upbringing — in his 2019 book "Brother Dog." Maybe someday he'll get around to doing another book, about his adventures in Hollywood and politics. But writing is difficult for Harry Thomason; we will have to be patient with him.

"The Story You Never Heard" isn't primarily about Thomason's stories, though a few are sprinkled here and there throughout the podcast. Mostly they're about history, little asides and footnotes not unlike the "rest of the story" anecdotes that conservative broadcaster Paul Harvey — who is bound to have been at least an unconscious stylistic influence on Thomason — used to provide the ABC Radio Network. But Harvey always had a pointed moral lying just beneath the folksy surface of his delivery; Thomason, a common-sense Democrat, avoids politics and preachiness.

"We kept them short," Thomason says. "The idea was simple; we just made sure they were about things that most people in this country don't know."

Such as the Sultana disaster, the worst maritime tragedy in U.S. history. The S.S. Sultana was a side-wheel steamboat, rated to carry fewer than 400 passengers, which routinely traveled from Cairo, Ill., to New Orleans. In the days after the end of the Civil War, it was overloaded with more than 2,400 people, including about 1,400 Union soldiers recently freed from Confederate prisoner-of-war camps, when it exploded on the Mississippi River. More than 1,500 people died, a few more than would die in the sinking of the Titanic in 1912.

While the Sultana catastrophe has become better known in recent years, it received scant coverage in its day, in part because contemporary newspapers were consumed by the assassination of President Abraham Lincoln, which occurred 12 days earlier, and the subsequent manhunt for John Wilkes Booth, who was killed by federal troops less than 24 hours before the explosion.

"The Sultana got a three-line mention in The New York Times," Thomason says. "The story was pretty much lost to the press nationwide."

Thomason's account of the incident, delivered in an accelerated cadence and cushioned by upscale production values is highly cinematic:

"At 2:11 a.m. on April 27, 1865, in midriver, seven miles upstream from Memphis near Marion, Ark., the Sultana's boilers blow apart. And the massive explosion dumps hundreds of people — some dead, some alive — into the cold Mississippi River. All the lifeboats have been destroyed, and it is a literal flaming hell in the water. Not only that but a full-grown alligator is among the struggling survivors. It's not pretty."

The alligator, a mascot of a company of Union soldiers, is the sort of specific detail that raises Thomason's stories above classroom history lessons. His version of the disaster stresses the "Herculean efforts" of a former Confederate soldier, ex-slaves still living on the plantation of their former master and the "belles of Memphis" as they pulled more than 500 people from the river — more than 300 of which would die in hospitals in the subsequent weeks.

One fact that doesn't make it into Thomason's Sultana story is that some of the wreckage of the riverboat — charred deck planks and timbers — was found in 1982, buried under an Arkansas soybean field that belonged to his then-future wife's family.

In other podcasts, Thomason relates a ghost story that actor Telly Savalas told him; delves into the calamitous string of unlikely events that allowed for the assassination of Archduke Franz Ferdinand; talks about the legacy of a Chicago barkeep named Mickey Finn and explores the "extraordinary life" of Eugene Bullard, jazz musician, boxer, nightclub owner, spy and the first Black military pilot who flew for the French during World War I. A fitting alternate title for the podcast would be "The Story You Should Have Heard."

While Thomason primarily works in visual media, and mostly behind the scenes, he's a natural performer who understands that nothing is more intimate than the voice in your head. "The Story You Never Heard" is a throwback to the radio dramas of his youth, a time before television's ubiquity. He's mindful of the ways people might use it — that he might be talking to people through earbuds as they jog, or in their cars as they run errands. That's why they keep the episodes bite-size — if you need to kill a few minutes, you can listen to one or two and come away knowing something you hadn't known 10 minutes earlier.

While he'd started the podcast well before the pandemic struck, it's a project he can keep going while television and film production is still largely shut down. Thomason's friend and frequent collaborator Benjy Gaither provides original music for the podcasts; Justin Nickels, an expatriate Arkansas filmmaker now living in Los Angeles, serves as audio supervisor. About once a week, or maybe every 10 days, a new episode appears.

The next step, he admits, might be how to monetize the endeavor. Initially, they offered the podcast on a paid subscription basis, but now it's available for free on every platform — Spotify, Google, Apple, "anywhere you get your podcasts" — and they're looking for sponsors. So they're encouraging listeners to, as the mantra goes, "subscribe, rate and review."

Thomason fits the role of podcast host well; he presents as a kind of low-key raconteur, tolerant with a natural curiosity about the human condition and an unmistakably authentic voice.

Subscribe to Harry Thomason’s podcast, link to episodes or find out more about the stories he tells at thestoryyouneverheard.com.