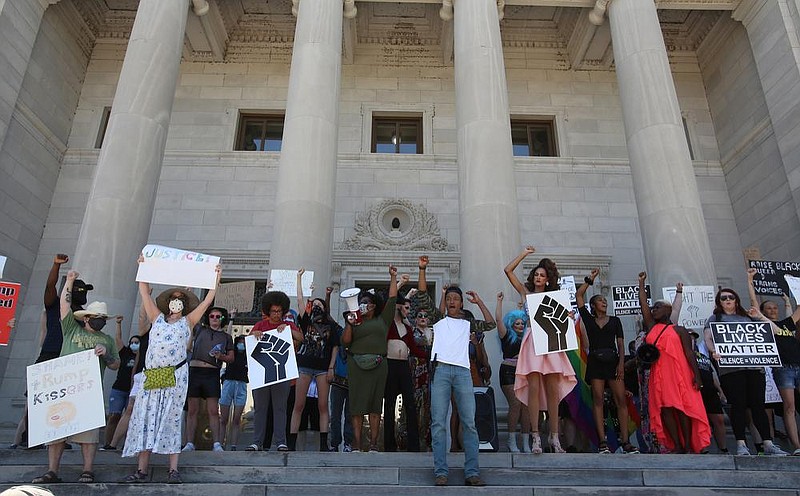 Protesters yell chants from the top of the steps of the state Capitol in Little Rock during a peaceful protest on Sunday, June 14, 2020. (Arkansas Democrat-Gazette/Thomas Metthe)

Authorities in Little Rock failed to provide video footage of a June protest where demonstrators blocked traffic in the city after the death of George Floyd, causing frustration for a local defense attorney after he was told the footage was no longer on a police server.

Attorney Michael Kaiser of the firm Lassiter and Cassinelli said police and prosecutors allowing video evidence to be destroyed violated the Police Department's policies as well as the legal procedure known as discovery. He called their actions "foolish as well as disappointing."

"I cannot believe they let this happen," Kaiser said in an interview. "I can't believe they would want this to happen, because it doesn't help them."

Kaiser learned that the mobile audio and video records from police vehicles, known as MVR footage, apparently had been erased after he filed a motion for discovery for any audio or video recordings generated at the scene, including video from dashboard or body-worn cameras.

More than two dozen people were arrested during the peaceful protest June 2 at West Third Street and Broadway in Little Rock. Demonstrators stood or sat in the roadway, blocking traffic for much of the afternoon.

Police vehicles at nearby intersections directed traffic away from the area where protesters had positioned themselves.

Little Rock police in riot gear eventually arrived and warned demonstrators to leave the roadway. When the protesters did not leave, police removed them from the street and arrested them.

On Oct. 30, law clerk Bradley Dixon at the office of the prosecuting attorney for the 6th Judicial District, which includes Pulaski and Perry counties, told Kaiser in an email that the clerk had "reached out to LRPD to obtain the MVR and was told that the MVR is no longer on the server," according to records Kaiser provided to the Arkansas Democrat-Gazette.

Without the ability to see those recordings, Kaiser said, he had "almost no idea what happened" from the police's standpoint.

The facts contained in an arrest disposition report for one of his clients, Emily Nowlin, was only two sentences: "Subj. arrested for blocking traffic during a protest. Subj. refused to remove themselves from the roadway."

Nowlin, 27, was charged with misdemeanor disorderly conduct. A pretrial hearing is scheduled for January, according to court records.

"Really, I have no idea what's coming at this trial," Kaiser said. "Who were the witnesses that actually observed my client in the roadway? Who told my client, 'Get out of the roadway?'"

In a motion to dismiss filed in November, Kaiser referred to Little Rock Police Department rules governing the retention of video footage.

A Little Rock police general order says video footage must be retained for 120 days before the footage is purged from the server, and police officials must notify a supervisor if the video is needed to support an arrest "or for other investigative purposes," according to a copy of the order included in Kaiser's motion.

Additionally, in his motion Kaiser noted a 2012 memo promulgated by Pulaski County Prosecuting Attorney Larry Jegley instructing local police chiefs to retain MVR footage or 911 calls until a case is concluded in the court system, citing the routine discovery requests made by defense attorneys.

According to Kaiser, the fight over video records has been happening for years.

"This is a huge issue in the defense community," he said.

He represented approximately two dozen people charged with offenses after the protests June 2, some of them arrested at Third and Broadway and others who were arrested later that night, accused of violating a city curfew imposed amid the Floyd demonstrations.

Kaiser said six of his clients have entered innocent pleas and have court appearances set for January. The remaining clients entered into agreements to have their charges dismissed as long as they were not arrested again within 60 days, he said.

The Little Rock Police Department only recently began outfitting police officers with body-worn cameras after the city Board of Directors approved a purchase of 275 cameras in June.

Mark Edwards, a Little Rock police spokesman, did not respond to emailed questions regarding the department's video retention policy and whether footage from the protest was, in fact, deleted.

Jeff Wankum, president of the Arkansas Association of Criminal Defense Lawyers, described the retention of police footage as a double-edged sword for clients.

Realistically, Wankum said, 75% of the time, video of a client's arrest is not helpful for the case. However, by way of example, Wankum said footage from a DWI traffic stop might show an officer incorrectly leading a driver through field sobriety tests.

There are other ways for attorneys to obtain footage, such as a Freedom of Information Act request, or at least by sending a letter asking for material to be preserved, Wankum said. But if a client did not come to hire him before the automatic deletion happened, "well, then we're screwed," Wankum said in an interview Monday.

In the past several years, the Little Rock Police Department has seemed to improve in terms of footage retention, Wankum said. He did not know whether the shift was attributable to Police Chief Keith Humphrey or if something else changed prior to Humphrey's tenure.

Humphrey was tapped to serve as Little Rock's police chief by Mayor Frank Scott Jr. in March 2019. Wankum also recalled that a recent civil lawsuit related to the practice of footage retention may have spurred a change.

"But I know that there has been a very large stink made about that for years, prior to Chief Humphrey coming in," Wankum said.

He said the National Association of Criminal Defense Lawyers -- his organization is a local affiliate of the national group -- has pushed for increased body-camera and MVR footage documenting police encounters with citizens.

The idea behind the organization's position is that the more transparency exists in government, the more opportunities exist to see when there are "people that shouldn't be in positions of authority," Wankum said.