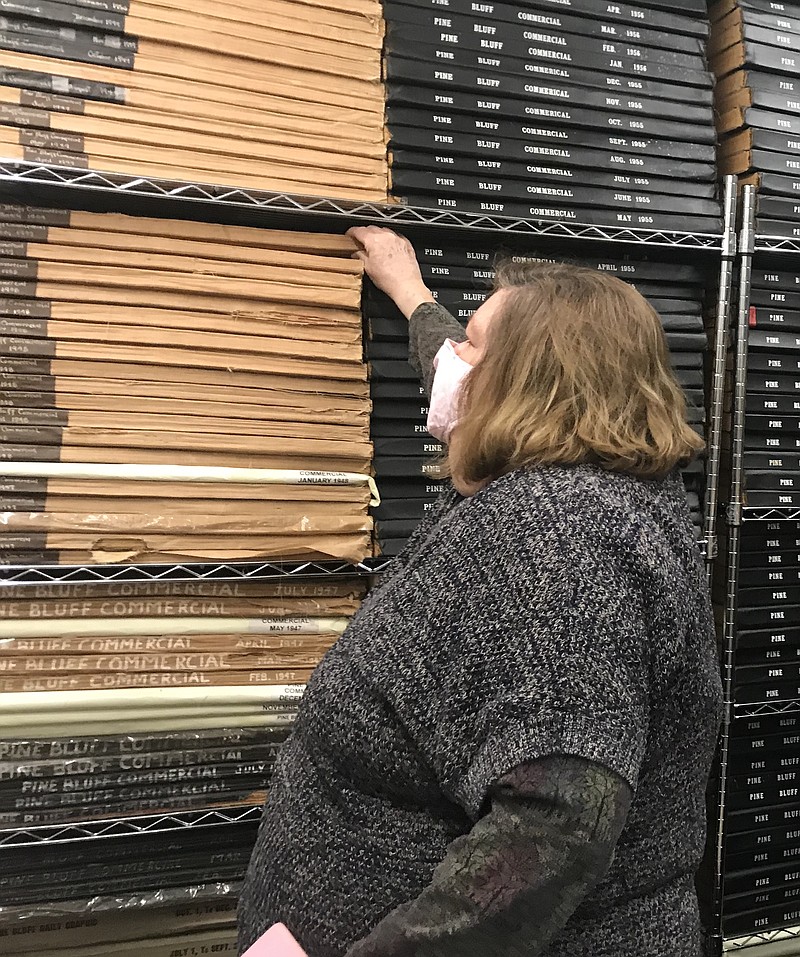 With little fanfare; delayed by months due to the covid-19 pandemic; and stocked to the rafters with books, magazines, videos, technology and a little bit of whimsy, the Pine Bluff/Jefferson County Library System opened the doors to its ultra modern, state-of-the-art flagship facility on Monday.

Originally planned for a March opening, that schedule was amended to a May opening, and then the covid-19 pandemic began its seemingly inexorable march across the globe, sickening millions and shutting down entire economies for months, as health officials around the world sought to get a grip on the growing crisis. Included in the collateral damage wrought by the pandemic were near constant interruptions in the supply chain of materials and manufactured components with suppliers being forced to curtail activities for days and even months, and some going out of business altogether.

As Monday dawned clear and cold, traffic to the library was light, with only about 15 patrons coming through the doors by 3 p.m., but Bobbie Morgan, the library director, and Ricky Williams, the assistant director, both said they had expected that and attributed the low turnout to the pandemic.

"People truly are taking the pandemic seriously around here," Morgan said, and Williams nodded his agreement. "We're taking plenty of precautions here, too. We want to make sure our patrons are safe."

"People are kind of anticipating the covid numbers to go up now that Thanksgiving is over," Williams said, "and I think people are just staying at bay and kind of watching the numbers, but we're hoping traffic will pick up. We're ready and we're prepared."

To help prevent spread of the virus, sanitizer stations are placed at all entrances and at various sites inside the building. Masks are required, and Morgan said the library has plenty in inventory for anyone who wants to come inside but lacks a mask of their own. Anyone who refuses to wear a mask will not be allowed inside.

Seating, reading tables, computer stations and other congregation points have been separated to enforce social distancing of patrons to limit the possibility of virus spread.

Inside the $10.5 million, 35,000-square-foot library, floor-to-ceiling windows provide plenty of natural light on all three levels as well as views of downtown in every direction. Much of the library's book inventory is housed on the first level, along with one of two recording studios, a teaching kitchen, a large community room and the library's administrative offices.

To fund the project, Pine Bluff voters approved in 2016 a property tax increase of 3 mills for 30 years to raise about $14 million to fund bond placement, legal fees, construction and $500,000 in improvements to the Watson Chapel branch library.

In a separate election, Jefferson County voters approved a 0.25-mill increase in property taxes to fund improvements to branch libraries in White Hall, Redfield and Altheimer.

On the second level, patrons will find books for younger readers, ranging from children's books on the south end of the spacious reading area to teen and young adult fare on the north end next to a section of steps and seating tiers dubbed the "story steps" that lead up to a teen loft where young people can hang out, listen to music, play video games, study, read or just relax.

For younger children who don't read, an activity area is set up between the young children's book section and a maker space designed to give young people a creative space where they can explore everything from manufacturing slime to experimentation in robotics.

"I think slime is a big favorite," Morgan said.

Monday's opening was what Williams described as a "soft opening," devoid of fanfare but intended to get the doors opened to the public with no further delay.

"We wanted to do this soft opening because we still have limited services due to covid," Williams said. "We want to make sure we keep everyone safe -- keep our employees safe -- but we want people to see the library because we've been closed for quite some time now."

Williams said the final phase of construction is underway as library staff consult check lists and ensure everything is operational and functioning properly.

"That's actually what I'm doing now," he said. "I'm working through the punch list as we speak. We're doing the finishing touches on the punch list, and they'll be complete within the next -- I would say -- three weeks or so. We're probably 95% complete, just little knick-knack stuff left."

Williams said interest has been high the last few weeks with a lot of people contacting him and other library employees asking when the library would open.

"The interest has been crazy," he said. "Phones have been ringing off the hook the last couple of weeks: Everybody wanting to know, 'When are you going open? When are you going to open?' Most people are excited about the studios because that's something new within the library system, and to Jefferson County as a whole you don't have any studios around town that people can come in and just use and ours are free."

The two recording studios housed in the building are equipped with recording equipment, sound mixer, keyboard, top-of-the-line interface and digital instrumentation programmed into Apple Logic Pro X to accompany almost any style of music. In fact, asked what aspiring internet sensations might need to bring with them, Williams said not much.

"They need to bring a flash drive," he said. "If you want to bring in an instrument to plug into our system you're welcome to do that as well."

Williams said he envisions people coming in to create podcasts, video productions using a green screen, oral histories, music videos, and almost any other application that can be thought of.

"Hey, everybody wants to be a YouTube star," he said with a laugh. "Here, you put your video together, lay down your instruments: You can be in New York, or you can be in Pine Bluff."

Other features include a video editing studio, a computer lab where patrons can browse the internet, create documents, put in job applications, peruse the day's news or catch up on email.

In addition to the recording studios and computer labs, ready for use is a fully equipped teaching kitchen with induction stove, two refrigerators, two microwaves, three prep tables, a dishwasher and soon a full complement of pots, pans and utensils.

Williams also said that many people are interested in seeing the inside of the glass-and-steel structure that dominates the corner of West Sixth Avenue and South Main Street where the architecture features an unusual addition to the Classical Revival, 20th Century Commercial, Italianate, Romanesque and Art-Deco styles that dot the downtown corridor.

Seating is spread out throughout the building with areas strategically placed to capture maximum lighting and to provide excellent views of the outdoors. Morgan said all of the seating was tested for comfort before any purchase agreement was made.

"We wanted to make sure this library is comfortable for people," she said. "Every seat in the place has been tested by our staff, and it had to pass their inspection before it could be included."

In one of the sections of the building facing Main Street -- just in case things get too serious -- there sits the "spun chair," a round contraption that sits on a point that slopes at a roughly 30 degree angle, allowing whoever is sitting in the chair to spin around in a circle. The sensation is hard to describe, but can be favorably compared to sitting at the apex of a spinning top that is winding down.

"You can't fall out of it," Williams said as he took a demonstration spin. Asked to take the chair for a spin for a photo op, Morgan demurred.

"I sat in it once," she said, laughing. "That was good enough for me." 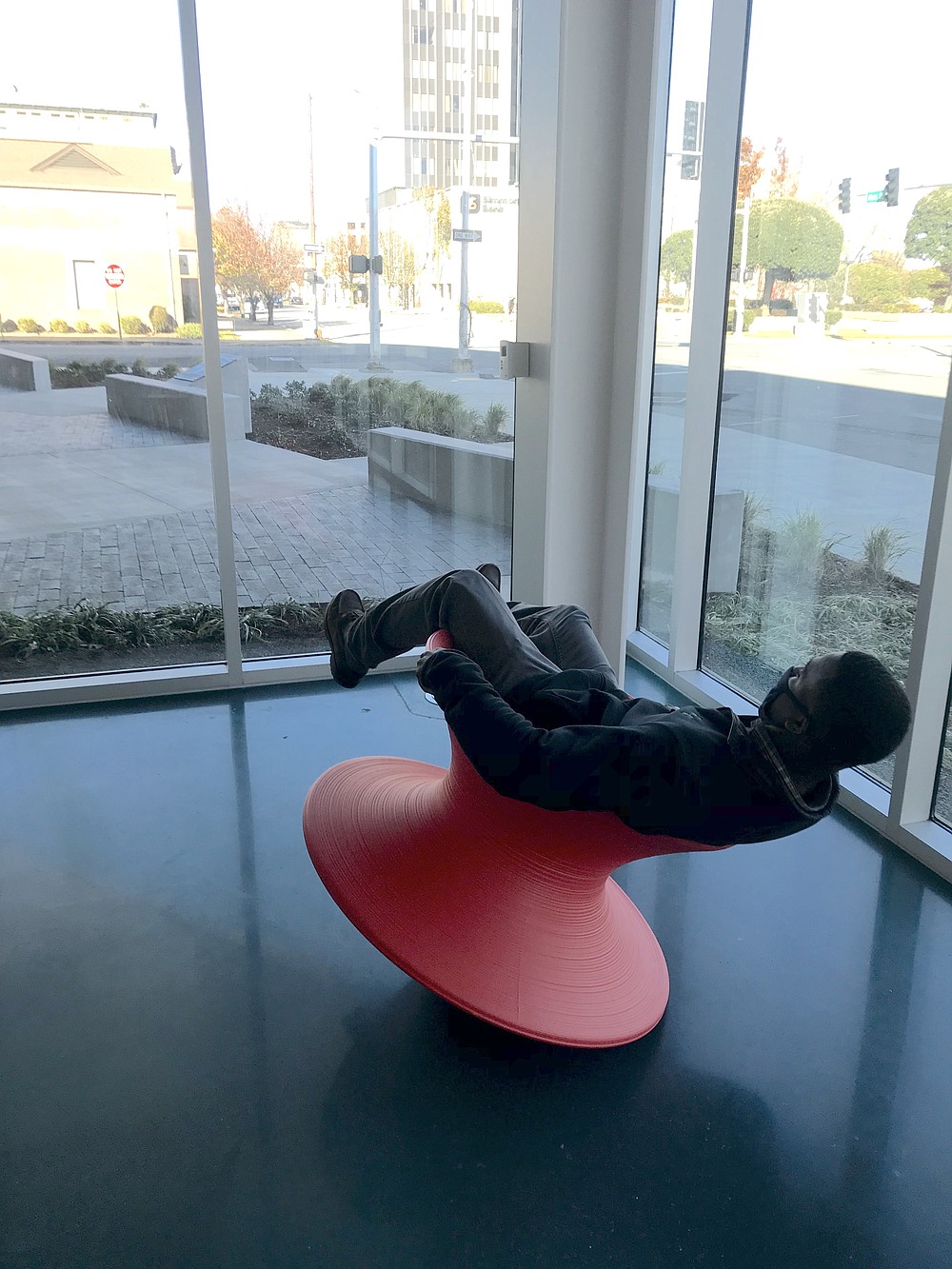 Ricky Williams, assistant director of the Pine Bluff/Jefferson County Library System, demonstrates the "spun chair" that sits facing South Main Street in the new library building. "We wanted to have something the adults can have fun with, too," Williams said. (Pine Bluff Commercial/Dale Ellis) 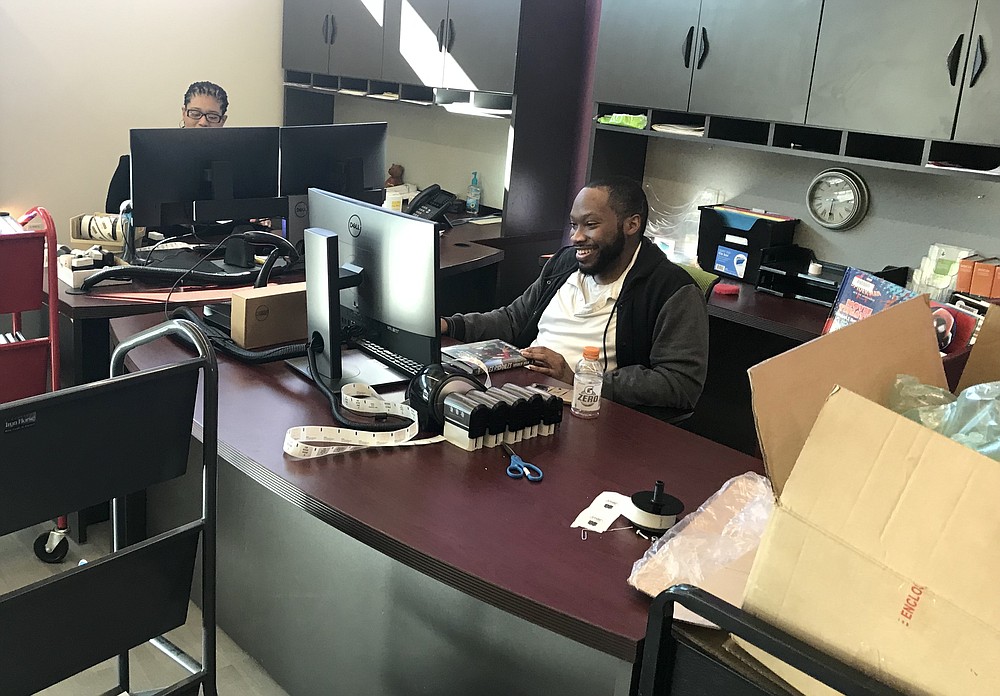