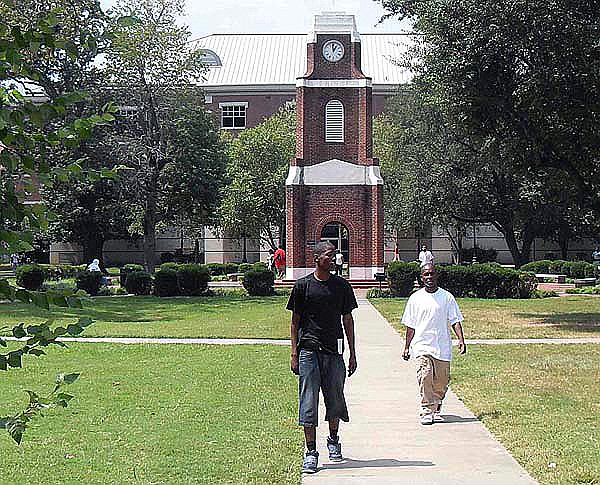 Charles Williams (left) and Brandon Muse, both students at the University of Arkansas at Pine Bluff, walk on campus Friday afternoon.

The University of Arkansas at Pine Bluff women's basketball team will open its home schedule tonight with a 6 p.m. game against the University of Central Arkansas in the H.O. Clemmons Arena.

Limited seating will be available for the game, with general admission tickets available for $5 at www.uapblionsroar.com/tickets.

Masks will be required, and temperature checks will be conducted for all fans, according to a news release.

Fans can also listen and watch online free of charge at www.uapblionsroar.com/live.

It's the first of two meetings between UAPB and UCA, with Pine Bluff scheduled to make the trip to Conway on Dec. 18.

The Golden Lions will look to improve to 2-0 after an impressive 85-68 win at Arkansas State Friday night.

Second-year head coach Dawn Brown said entering the season that her team could score the basketball: The 85 points put up Friday was the highest in the Brown-era as well as the most by a UAPB women's team in four seasons.

She was most pleased with the defense, as the Golden Lions held Arkansas State to under 20 points in two of four quarters, including 11 points in the final 10 minutes.

UAPB limited the Red Wolves to five of 31 shooting from 3-point range, and they out-rebounded ASU 43-38.

"I have been on my team about defending the basketball," Brown said. "I know we can shoot the ball, but we have to be able to get stops. I would have liked for us to get a few more steals (eight) and we have to improve our anticipatory skills better. That's something that No'ell Taylor (graduated senior) was really great at, and I'm hoping that Jazzeem Bethea will fill that role to help our defense."

This will be the third straight road game for Central Arkansas, which lost at No. 4 Baylor 82-37 last Wednesday and 65-48 at Texas Christian University Saturday.

"Ibeh does a really good job attacking the basket," Brown said. "They play hard and have faced some tough opponents, but Central Arkansas did not go away. I give them a lot respect for that. For us, we have to do a better job of making good shot selections."