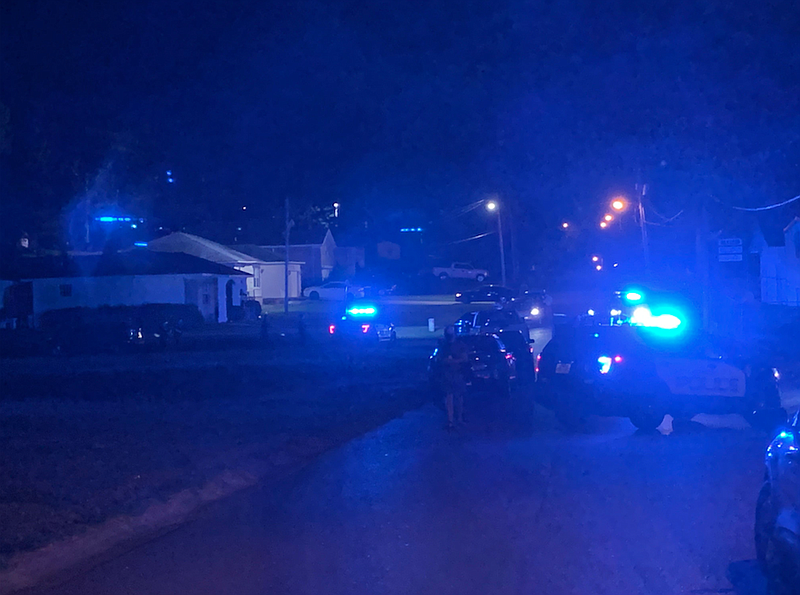 Little Rock police work at the scene of a shooting that injured an officer late Saturday.

A Little Rock police officer shot in August was caught in the crossfire of a violent feud, authorities said Tuesday, warning that the cycle of violence would continue to grow if left unchecked.

Two weeks after officer Christopher Crowder was wounded, one of the men suspected of being part of the violence was dead, killed on a Jefferson County highway in a shooting that wounded three of his friends, including another man believed to be involved. State Police arrested a Pine Bluff man on capital murder charges last week.

Crowder was shot in the right leg Aug. 22 outside 4513 Rosswood Drive while investigating an earlier report of gunfire at the residence off Doyle Springs Road, south of Interstate 30. A bullet also struck a Jeep holding 1-year-old twins, although the children were not harmed.

According to arrest reports, one neighbor reported seeing a silver Cadillac fleeing the scene, while video surveillance from the home of another neighbor shows a light-colored Cadillac driving by the house with muzzle fire coming from the vehicle's passenger side.

Testifying at a bail hearing for the three men accused in the shooting, detective Matt Harrelson said Tuesday that the men had not targeted Crowder but had driven to the house to get revenge on people at the residence who had fired at two of them about 90 minutes earlier.

Defendants Kaleb Christopher Farrell, 20, of Little Rock, Tashawn Jaheam Landers, 19, of Searcy and Jaiden Alexander Lee, 19, of Little Rock, are each charged with first-degree battery of a law-enforcement officer and three counts of committing a terroristic act, charges that together carry a potential life sentence. Pulaski County Circuit Judge Chris Piazza set their bail at $200,000 each.

The sequence of events that led up to Crowder being wounded began about 8:30 p.m. when homeowner Jennifer George, 36, called police to report 19-year-old J'Hardy Miller had come to her house and caused a disturbance then threatened to shoot up the house as he left. Shots were fired as Miller drove away.

Just before 10 p.m, Crowder was in front of the residence talking to George when a silver sedan driving by the residence opened fire, striking him in the leg. Crowder suffered two wounds, although investigators don't know whether he was shot twice or if the second injury was from a ricochet, Harrelson testified.

The detective said Miller called 911 later that night to arrange a meeting with investigators after hearing that police believed he had shot Crowder.

Miller told police that he, accompanied by Lee and Landers, had been to the Rosswood Drive residence looking for his girlfriend and had found her with George's son, 19-year-old De'Vonta Trevion Miller. The men fought, and then J'Hardy Miller left.

He told investigators that as he was driving away with Landers and Lee, someone started shooting at their car but no one was injured.

The three went to the home of his girlfriend's mother but they decided to go back for revenge, Miller told police. He said he had a rifle while Lee and Landers had their own guns.

They picked up Farrell, who had an AR-15, for "more protection" but when they returned to Rosswood Drive and saw police at the house they changed their minds about going through with their plans, Miller told detectives.

Miller said he dropped the three men off, and the three got into Lee's silver Cadillac, taking his rifle with them, while he went back to his girlfriend's home. Miller said he heard about the officer being shot later that night and then learned how he was being blamed for it, so he came forward to clear his name, according to testimony.

Arrested that night, Lee denied knowing anything about the shooting and told police he had not even been in the area then. A search of his 2007 silver Cadillac turned up the same kind of shell casings that were found at the Rosswood Drive home, according to a police report.

Also arrested that night, Landers told police that he, Lee and Farrell had gone to the Rosswood Drive home to shoot up the house to get even with the people who had shot at them. Landers said Lee was driving while he and Farrell fired at the residence, the detective testified.

De'Vonta Miller was killed Sept. 3 on Interstate 530 near Pine Bluff by someone firing a gun into the car he was riding in. Among the three other people wounded were two men who had been at the Rosswood Drive home the night Crowder was wounded, Austin Hunter and Deddrick Laqwan Childs, both 19.

Childs is in the Pulaski County jail on terroristic act charges, accused of firing into the car carrying J'Hardy Miller, Lee and Landers. Miller is also believed to have shot at the car, according to testimony.

Authorities suspect the shootings are connected, possibly more revenge, even though Farrell, Lee and Landers were in jail when Miller was killed, deputy prosecutor Michelle Quiller told the judge Tuesday. She warned of a cycle of violent revenge that is likely to continue to grow if left unchecked.

"This is retaliation," Quiller said. "I don't think it's ever going to stop."

Quiller said authorities believe the three defendants are a danger to the community and even to each other, telling the judge that jailers have had to keep the three separate because they are now feuding among themselves.

CORRECTION: Little Rock Police Officer Christopher Crowder was wounded in an Aug. 22 drive-by shooting outside of De’Vonta Trevion Miller’s home at 4513 Rosswood Drive. Miller, 19, of Little Rock, was killed in a Sept. 3 shooting in Jefferson County. Crowder’s condition and the date of Miller's death were incorrectly reported in an earlier version of this article.