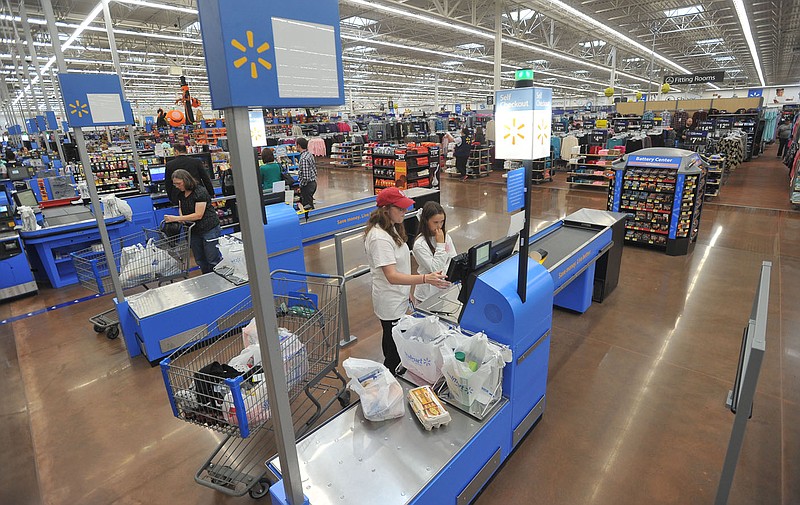 Sydney Walsh (left) and Channing Daniels use the self checkout lanes at the Pleasant Grove Walmart in Rogers in this Sept. 30, 2015, file photo.

With the help of one more payday than in the same month a year ago, Arkansas' general-revenue tax collections in November increased by $18.3 million from a year ago to $533.5 million and exceeded the April 2 forecast by $31.5 million.

Revenue in November is a record for the month, exceeding the previous high of $515.2 million in 2019, said Whitney McLaughlin, a tax analyst for the state Department of Finance and Administration.

Those two categories are state government's largest sources of general revenue. They help pay for state support of public schools, the Medicaid program, colleges and universities, prisons and other programs.

"November is the another growth month in which our state revenues exceeded our forecast," Gov. Asa Hutchinson said Wednesday in a written statement. "Our state's economy is getting stronger every month even though there are significant strains on our recreation and hospitality industry."

"The current surge in Covid-19 cases does limit our current economic recovery and is a good reason to continue to be conservative in our state spending and to make sure our reserve funds are sufficient," said the Republican governor.

Tax refunds and some special expenditures are taken off the top of general revenue, leaving a net amount that state agencies are allowed to spend.

Individual income-tax refunds dropped by $10.4 million, or 57.1%, from a year ago to $7.8 million, which was $13.7 million below forecast and contributed to net available revenue, the finance department noted.

November is the fifth month of fiscal 2021, which started July 1.

The results include net collection increases tied to shifting the individual income tax due date to July 15 in fiscal 2021 from April 15 in fiscal 2020, the finance department noted.

On April 2, the finance department cut the net general-revenue forecast by $205.9 million to $5.68 billion, citing a projected recession triggered by the coronavirus pandemic.

In its fiscal session in April, the Arkansas General Assembly enacted a $5.89 billion general-revenue budget for fiscal 2021. The April 2 forecast will provide $5.68 million in general revenue for that budget, leaving $212.2 million of the budgeted $5.89 billion unfunded.

Hutchinson said Wednesday, "The reduction of spending last April was important to be sure our state could manage our way through this pandemic from a financial standpoint and we have done that."

The state's chief economic forecaster, John Shelnutt, said, "We have a lot of unknowns in the second half of the fiscal year.

"At this point, we can't really tell what the survival rate is of small business and their income tax filings, mainly as partnerships in individual income tax, so we expect to get our first evidence of that in January payments to see if they have no need to file any more tax payments," he said.

"And with [federal] stimulus fading, we could see a simultaneous problem with income tax and sales tax," Shelnutt said.

"We are getting along just fine," said Jean, who is a co-chairman of the Joint Budget Committee.

"I think we need to finish the year and save a little money to see what is going to happen" with the economy during the pandemic, he said in an interview. "Plus, I am for increasing the long-term reserve [fund] and I think a lot of that money needs to go there, too."

According to the finance department, November's general revenue included:

Withholdings are the largest category of individual income-tax collections.

There was one more Friday payday in November than there was a year ago "so the year-ago growth rate is boosted by that [but] that is already accounted for in the monthly forecast," said Shelnutt.

State officials are continuing to see growth in retail and motor vehicle sales-tax collections, but the collections "were pulled down by weather-related effects in the utility part of the sales tax," Shelnutt said. The cooler-than-normal weather in September reduced use of air conditioners, in turn reducing utilities' sales-tax revenue, he said.

The sales-tax reporting sector with combined accommodation and food services, including restaurants, declined by $900,000 compared with year ago for a 4.7% decrease, Shelnutt said.

Asked if state officials are able to estimate how much of the tax collections are based from internet sales, Shelnutt said, "That is difficult because of the way they register and change registration over time.

"It is still high. It's high across most of the states. Some of that is shifting from storefront to online," he said. "Some of it continued gains in that sector that were already underway and the covid-19 apparently accelerated the business model along the line for a lot of big companies that were already going that way with their business platforms."

State officials projected that a 2019 law requiring internet retailers without a physical presence in the state to begin collecting taxes on their sales to Arkansans would raise $32.4 million in tax revenue, including $21.7 million in general revenue, in fiscal 2020.

"Although the exact results for the online sellers subset is clouded by varying types and timing of new account registrations of remote sellers, the results in general indicate a doubling of the original estimate for positive impact against forecast," Shelnutt said in July. "These gains helped offset sales tax losses from business closures and sector impacts tied to covid-19 response."

• A $3.6 million, or 72.9%, increase in corporate tax collections to $8.4 million, which fell $1.8 million, or 17.3%, below forecast in what the finance department called an otherwise minor collection month.

Most of the increased general revenue would go to human services programs, the public schools and colleges and universities. Lawmakers will consider the proposal during the regular legislative session, which starts Jan. 11.

The governor also proposed the 2021 Legislature approve $50 million a year in tax cuts for low- and moderate-income Arkansans, and reduce the top rate to 4.9% for new residents for five years, with the eventual aim of reducing the top rate for everybody else to 4.9% over a five-year period. Cutting the top tax rate to 4.9% is projected by state officials to reduce general revenue by $275.6 million a year when fully implemented.