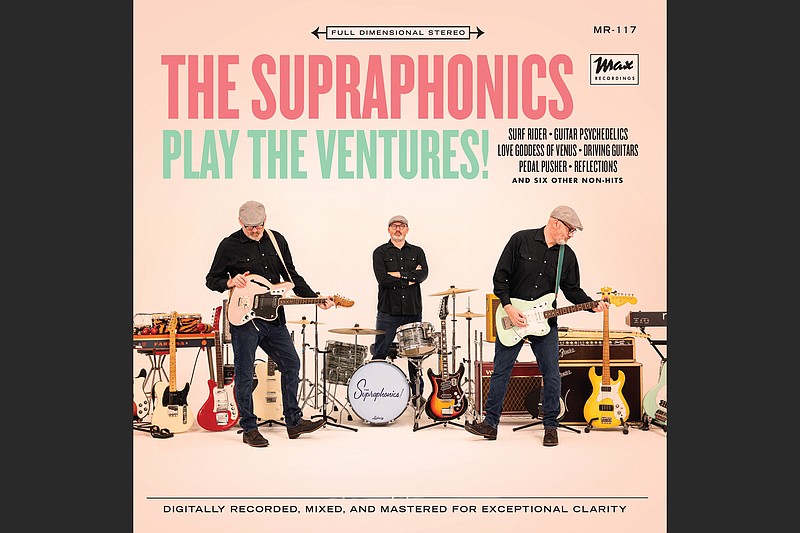 Geoff Curran loves surf music and The Ventures. A lot. He is so besotted with this rock 'n' roll sub-genre that he formed The Supraphonics — "Pulaski County's No. 1 surf combo" — in which he is the only member.

Three years ago Curran, the drummer for Little Rock alt-country champs Mulehead and a frequent collaborator with fellow Mulehead Kevin Kerby — released "Christmas with the Supraphonics," a Yuletide record of seasonal chestnuts like "Silver Bells," "Winter Wonderland" and others done up in full-on, hang-10, surf-rock style.

And now he is back with "The Supraphonics Play the Ventures!," a spirited, stoked-out album of 12 covers of Ventures originals with Curran playing all instruments. Just like the holiday album, the new record was recorded for Little Rock label Max Recordings. It was released Nov. 27 and is available on CD and at streaming outlets. A limited-edition pink vinyl pressing from Max will be available in January. See maxrecordings.com for information.

The Ventures, an instrumental four-piece formed in 1958 in Tacoma, Wash., became best-known for their covers of songs like "Walk, Don't Run," "Hawaii Five-O" and "Wipeout."

On "The Supraphonics Play the Ventures!," Curran passes on these popular tracks and instead offers his own interpretations of Ventures originals like "The Swingin' Creeper," "Surf Rider," "Driving Guitars," "Mod East" and more.

[RELATED: See The Supraphonics' video for its cover of The Ventures' "Surf Rider"]

The 55-year-old Curran is originally from Boston and came to Little Rock in the summer of 1997 with his wife, Jill, a native of the Natural State's England, who he met when they were graduate students at Rutgers University in New Jersey. They have two sons.

Curran has a doctorate in sociology from Rutgers and when not lovingly crafting tribute albums to surf music legends, moonlights as director of the Center for Implementation Research at UAMS, where he is also a professor.

In an interview edited for clarity and length, Curran talks about The Ventures, recording and how he picked the tracks for his new album.

Q When did you get interested in The Ventures?

A I've been a fan of that band — obsessed with that band, frankly — for a long time. I probably first heard them from my brother, Brian, when I was a kid. I played a couple of their songs in a high school band way back when. I was really enamored of them. I'm a drummer first and foremost, and one of the songs I played in my high school band was "Wipeout," which has drum solos in it. Surf music is very guitar-driven, but it's also very drums-driven. The Ventures' drummer [Mel Taylor] was one of my favorites as a kid.

Q What was the idea behind "The Supraphonics Play the Ventures!"?

Q Are you one of those musicians who has to have all the period-appropriate gear on a project like this?

A Not exactly. I wouldn't say that I'm a purist. There are people in current surf bands who play it pretty close to the industry standards with the Fender Showman amp and the reverb unit that's separate and only a Jazzmaster or Mosrite guitar. I've always been OK with a range of [gear]. My drums are all old. The main drum set I used on it is from 1964, a little Ludwig set. I have a mixture of old and new guitars. The two main ones I used were new. One was made by this cool company called BiLT out of Des Moines, Iowa.

Q Where did you record?

A I have a studio in my garage and it was all done here. I have recorded a lot of things over the last seven to 10 years here — the last Mulehead record, a lot of Kevin Kerby's solo stuff. It's pretty small, but it's still a fully operational studio.

Q How did you choose what songs to cover for the new album? Were you looking for ones that were the most challenging to play or that you were comfortable playing?

A It was a mixture of both. I had a list of maybe 20 or so songs that were finalists. I really like the mid- to late-'60s psychedelic-type music of theirs. If it had a psychedelic word in it, I was probably gonna choose it. The one song I chose that people may have heard before is "Surf Rider," which [The Lively Ones] covered and was used as the outro to the movie "Pulp Fiction."

Q What was it like for you as a musician to approach these songs you love so much and try to put your own stamp on them?

A I didn't stray far from the surfness of these songs. I didn't do reggae versions of them [laughs]. I really like arranging. I like the process of trying to work out parts. I had the mindset that even though it's just me and not a band, that there was a band with a drummer, a bass player, a keyboard player, two guitarists. I was going for something pretty lush, like here's a seven-piece band playing this stuff. I added some things here and there but nothing radically different.

Q The pandemic has really messed with live shows, but have you given any thought to putting a band together to play out at some point? And are there plans for more Supraphonics recording?

A I've been wanting to put a live band together to play a couple of Christmas shows and play the Christmas album. This was going to be the year I was going to have a live group and play some holiday shows. It's something I hope to do in the future when we can play again. We'll see. I've already started the next album, which I say is going to be all originals. We'll see how it goes.