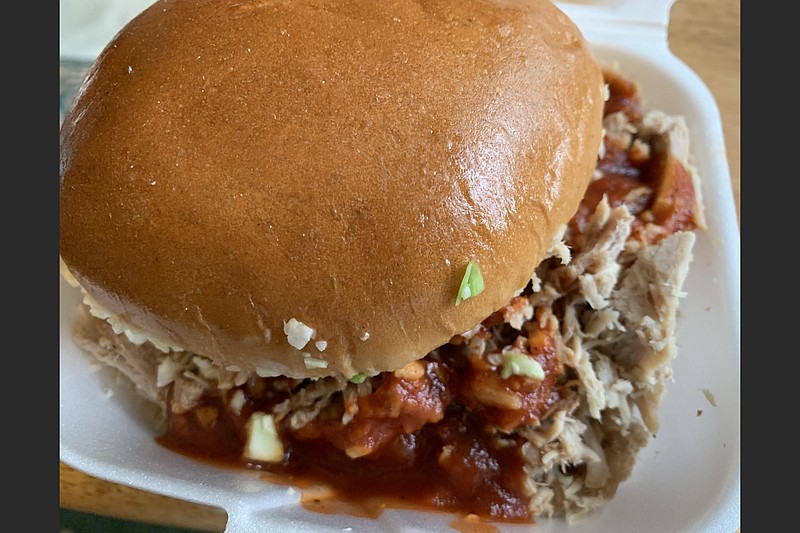 This came close to being an all-barbecue edition but at the last culinary moment, we decided we preferred giving thanks for pizza last month, so we redirected an excursion out Arkansas 10 to discover the circumference of pie.

We're still avoiding chains, keeping (with an occasional exception — see below) to a 15-minute radius from home to assure the food has a chance to still be hot upon arrival, and paying for our meals in full up front.

The sandwich, with slaw and just under quite enough of McClard's legendary slightly spicy, slightly vinegary, really delicious barbecue sauce, was too big to lift out of the foam clamshell and we pretty much decided to down it using a knife and fork. The tamale spread, which was new to us, was incredible, closer really to tamale/frito pie, with a bottom layer of Frito chips, a thick layer of spiced, fine-ground tamale filling, a layer of beans and a thick top layer of grated Cheddar. The half spread was so large it would have easily served two; the full spread is clearly more food than humans should be allowed to eat.

HOW IT WENT: Like a charm. We ordered at one window, and were handed our order almost immediately out of a second. This is at the very edge, or perhaps a little past, our normal 15-minute radius but we decided not to wait to see whether the truck, which made its historic debut Nov. 18, might park closer to us. So we decided to risk it. By viewing the speed limit as metaphorical instead of literal (do the words "bat out of hell" ring any bells?), we managed to get our food home in 16 minutes, and that's close enough.

HOW IT'S GOING: We're told the day the truck "opened" there was as long as a 90-minute wait. Things have eased since. We got there just ahead of the lunch rush and were in line behind two other customers, but didn't wait more than a couple of minutes to order and be served; by the time we left, there were six or seven customers in line behind us and more cars pulling up. 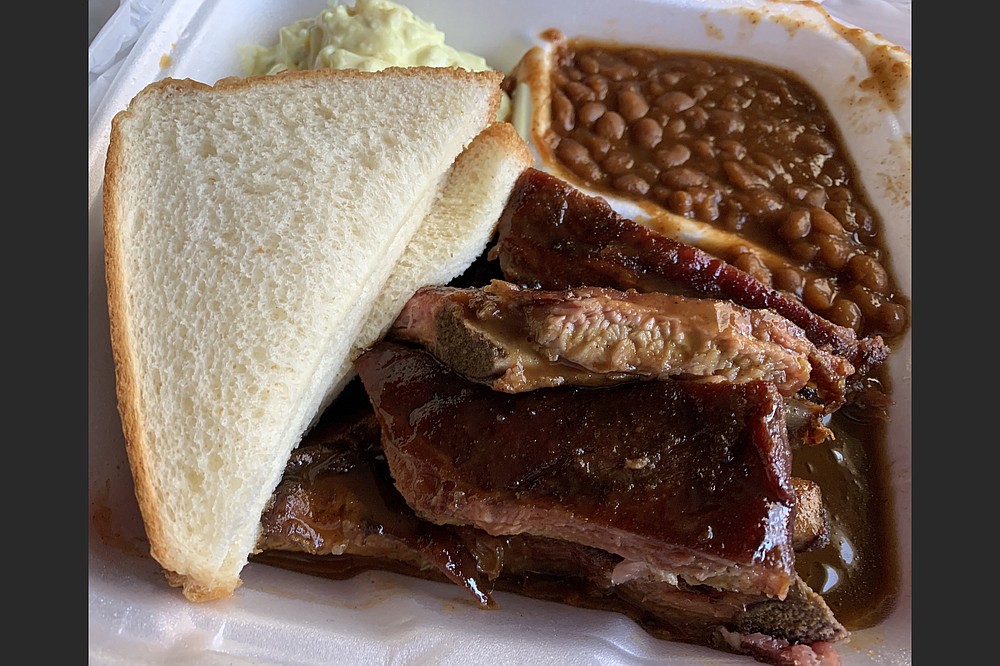 The six-bone pork rib dinner from Sims Bar-B-Que comes with choice of two sides — in this case, potato salad and baked beans — and a lot of the restaurant's legendary, vinegary sauce. (Arkansas Democrat-Gazette/Eric E. Harrison)

WHAT WE GOT: Pork rib dinner ($10.45) with baked beans and potato salad

It has been nearly a decade since we last visited Sims' flagship operation, which moved in 2008 from 716 W. 33rd St. to the shopping center at the confluence of Broadway and Roosevelt Road. We revisited the rib dinner because we enjoyed it when we ate there last, but we got a welcome surprise: Sims' vinegary, legendary barbecue sauce had not especially thrilled us on a plate in the dining room, but we now know it's because there wasn't very much of it. There was much more of it here, liberally slathered on the ribs and overflowing into the paper lining the bottom of our foam clamshell container. What a difference! The six ribs were very tender, and as meaty as we have seen pork ribs; the well-smoked meat was falling off the smaller bones and the rest required very little gnawing to fall away. We have always liked Sims' mustard-based potato salad; the beans were so-so.

HOW IT WENT: We phoned in an order and it was ready in the 15 minutes we were given to pick it up. Staff told us, slightly shamefacedly, that they had mistakenly conflated it with another order, causing a bit of grief to the preceding customer while they refigured the math; otherwise we were close to having our meal paid for by an unwitting benefactor.

HOW IT'S GOING: The dining room isn't open, so all orders are to-go. There were a couple of other customers ahead of us for pickup when we arrived and one behind us. 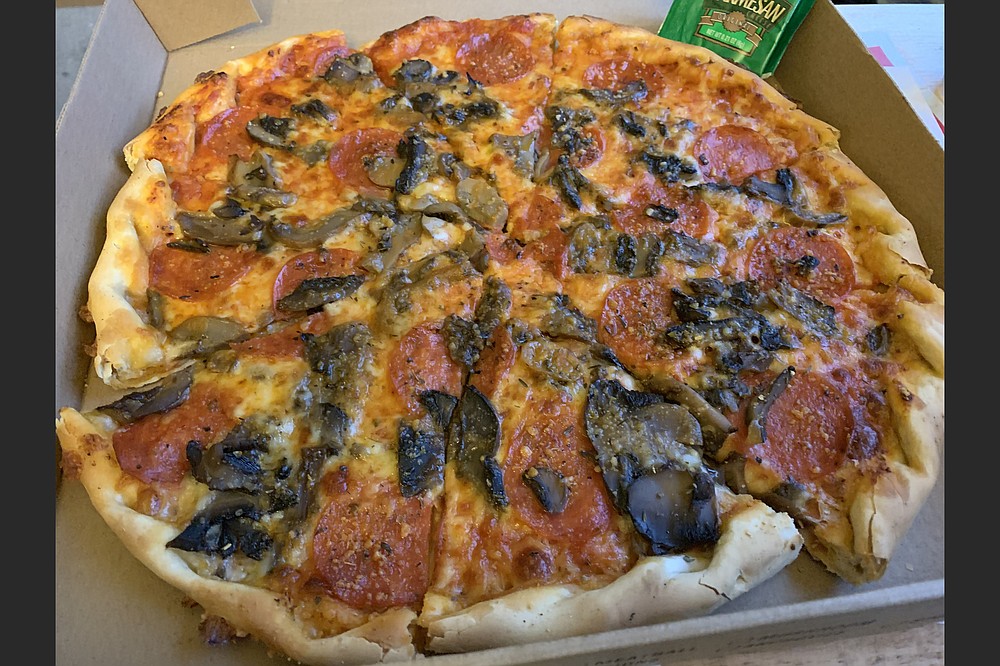 A 13-inch pepperoni and mushroom pie from Pizza Cafe West wasn't hot when we got it home, but it was delicious. (Arkansas Democrat-Gazette/Eric E. Harrison)

Traffic along Cantrell Road, though well before the official rush hour, is still a beast, and trying to make any kind of turn, left or even right, into that traffic can sometimes take longer than planned. Which is why our pizza was only lukewarm when we got it home. But it was still delicious, a very generous amount of sliced fresh mushrooms immediately visible on the top, partly obscuring the mild pepperoni, with just the right balance of cheese and red sauce on a thinnish crust that worked so well we actually ate most of it.

HOW IT WENT: The dining room is open; we placed our order by phone and paid for it when we arrived.

HOW IT'S GOING: There were a couple of occupied tables but no other to-go customers.