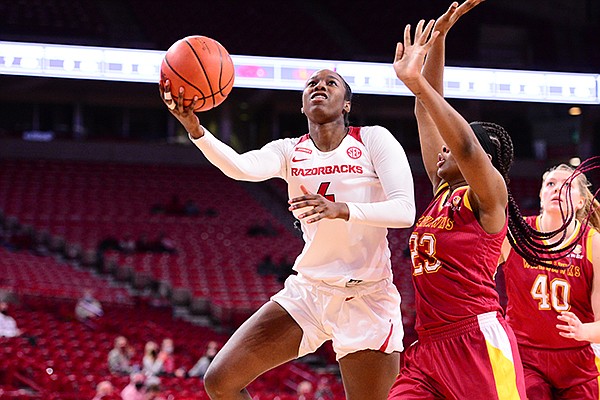 Arkansas' Erynn Barnum (4) shoots a layup during a game against Louisiana-Monroe on Thursday, Dec. 3, 2020, in Fayetteville.

FAYETTEVILLE — Arkansas bounced back from a disappointing loss with its best offensive performance of the season Thursday.

The No. 16 Razorbacks defeated Louisiana-Monroe 103-50 at Bud Walton Arena to improve to 4-1 this season.

The ULM game was sandwiched between a pair of high-profile matchups for Arkansas. The Razorbacks lost 115-96 to No. 14 Maryland last weekend and are scheduled to host No. 4 Baylor on Sunday.

The Razorbacks led by as many as 59 points in the fourth quarter.

ULM (0-1) lost its 14th consecutive game dating to last season. The Warhawks were limited to 28.8% shooting (17 of 59) and committed 18 turnovers that Arkansas converted into 30 points.

The Razorbacks outscored ULM 48-2 in transition.