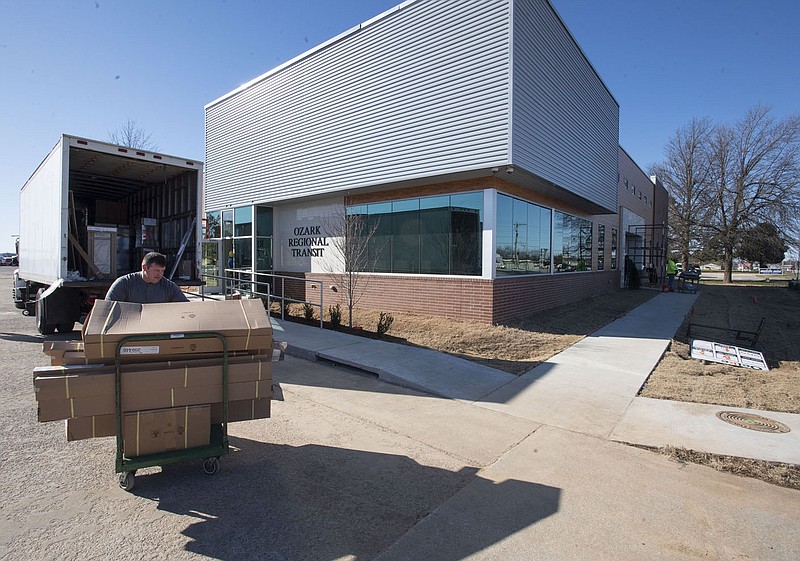 Furnishings, computers and the fiber-optic internet service was being installed this week and employees began moving their personal items with an anticipated “go live” date of Monday, in the new building.

A certificate of occupancy was granted Wednesday morning.

Transit officials will welcome visitors from 1 to 3 p.m. Wednesday through Friday next week.

“The soft opening will be an open house type with no formal presentation,” said Joel Gardner, executive director. “As visitors come and go, we will be able to walk them through the facility in small groups and show them what has been accomplished to date and what will be happening in phase 2 of the construction process.”

Basically, phase 2 will be removing the old building and replacing it with an employee parking lot.

Ozark Regional is using a $2.9 million federal grant to build the 8,600-square-foot administration and operation center. It took three tries to secure the grant. The transit agency began applying for federal grants for a new building in 2015 and received approval in September 2018.

The grant is from the U.S. Department of Transportation. Regional Transit’s land on Robinson Avenue, about a mile east of the Springdale Municipal Airport, is being used as a local match for the grant, according to Gardner.

Ozark Regional broke ground on the building in February. Risley and Associates architectural firm of Fort Smith designed it, and Oleke Construction of Lowell is the builder.

Gardner said the building will help the transit agency develop over the next 30 years. It has a board room, office space for staff, room for future staff and a training room.

Regional Transit had outgrown the 7,000-square-foot building that has housed it for decades. ORT has 64 employees.

The transit agency has bounced back from a early morning Jan. 9, 2017, fire that destroyed 20 buses, decimating its fleet.

They used a mismatched collection of loaned and borrowed buses to maintain service. Since then, several federal grants have been used to buy new buses, which cost about $120,000 each, bringing the fleet back to full strength. ORT now has 33 vehicles in the active fleet.